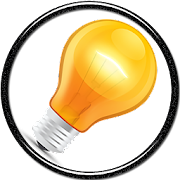 You can experience LED Flashlight that is very bright. This LED Flashlight will be used as illuminating, tiny torch, lamp and SOS torch. Just use camera flash as a torch light for the brightest experience. LED light is very useful while working in the night or in the dark. This will help you to work in light while study or working with it’s Super LED flashlight. It is low Battery consumer Torch light. Which help you to continue, when you have low battery cells. Torch light app converts your device into a torch, which is perfect for finding things in the dark. LED Flashlight is the best one you can find on the Android App Market. However, Flashlight only requires access to the camera of the Smartphone to complete its functions. In fact, it is quite brilliant (pun intended). The design and layout of the app is very intuitive and looks very appealing. The bulb that is used as a means to indicate the flashlight is a nice touch. It adds a touch of class to your smartphone and gives you something new to work with. Moreover, it is incredibly simple to use. You don't have to do anything, really. Just touch the bulb that is present in the middle of the app when it is launched. It is going to activate the LED/Flash that is a part of your camera app. Now, as long as the app remains open, the flashlight will continue to keep the LED or Flash open. You will thus receive ample light to see in the dark. Make sure you keep the app open though or the LED/Flash will turn off and you will lose the light. So, you can't use any other app when you are using the Mobile Torch – Flashlight. it's totally free and support all the android devices. Features: 1. Torchlight in Dark 2. Morse Code Flash Light for SOS 3. SOS seek bar 4. push notification if minimize. 5. Free 6.Insanely bright, when using the LED flashlight 7.Always available when you need it - this is the most optimized and reliable flashlight app designed to preserve your battery life while operating. 8. Be prepared for emergency situations with additional plugins like the Warning lights and Strobe, Morse, Blinking lights. Best torch LED Flashlight very useful for smartphones like:  Samsung Galaxy S2, S3, S4, S5  Samsung Galaxy S6  Samsung Galaxy S7  Samsung Galaxy A4, A5, A6, A7, A8  Samsung Galaxy J5, J7, Grand Prime, Core, Ace 4  HTC One M7, One M8, One M9  HTC Desire X, Z, HD  LG G5, G4, LG, G2, G3, Nexus  Sony Xperia X, Z5, Z4, Z3, M2, M3, M4, M5, XA, Z3+, Z3 Compact  Xiaomi, Nexus, OnePlus, Asus, Huawei, Motorola  HTC Desire 610  LG Optimus L5 II  LG Optimus L9  LG D855 G3  Samsung GT-I8190N Galaxy S III Mini So, you do notneed any other app when you are using the Best Torch LED Flashlight.