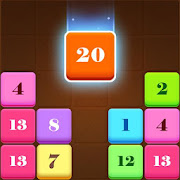 Drag n Merge is a brand new puzzle game! Just drag the block onto another one with the same number! Merge them into a bigger number! FEATURES •Easy to learn, hard to master A new type of brain training puzzle, entertain your brain for minutes or hours. • Minimalism graphics The wooden art design is simple but beautiful. • Playing the game with your FRIENDS We support online rank list! You can challenge your friends by achievement and leader board. • Free to play, WIFI is not a must • Exercise the brain and make people smart If you have some good ideas about Drag n Merge, please send us an email in the game!

Kezza Chisholm on 2020-02-27
Cheating game. Was out doing this game then it freezers and they wonder why the players make comments like these. Couldn't handle player getn too close to comfort, ay inventor of game. Only way you can keep player from beating your ass is to freeze the timer then when the player goes on Ad Break then presses continue, the game went back to the second play on page and didn't allow me to play fairly because the timer went faster then it would usually. Cheats.
Veronica Valentine on 2020-02-27
Yet another disasterous merge game! It cheats incessantly, can't get a game to last more than 7 minutes before you're forced out. And the fact that they make NO attempt to incentivize or enhance the game experience at all is pathetic. There are too many people designing these games that really shouldn't be because they don't know what the heck they're doing! Unfortunately, a great concept that's poorly executed makes for a sucky game. Uninstalled!
Diane Goins-Hall on 2020-02-27
Sub standard software...there is NO reason to continue playing this game when there are no rewards no way to accumulate hearts no strategy to unconnect the annoyingly connected blocks! I even went ad free in hopes that my uninterrupted flow would help. Not even! I will be uninstalling even though I'll never get my $ back but more importantly the many hours I wasted in trying to 'master' this annoying game.
Toron Beldevar on 2020-02-27
This is a pretty decent game. The amount of advertisements are relatively few per game; usually they appear when the game is paused, which is a bit annoying. Another small (and subjective) dislike is being congratulated on each and every game just for reaching the number 15. It's so easy that it doesn't really feel like an achievement anymore when I do.
S Mir on 2020-02-27
The game is fun to play but as everyone says ads are just too annoying. It also gets frustrating with the attached blocks. I think this is deliberate to make you watch more ads because they could have gradually increased the minimum number on the blocks and help you keep playing for longer.
W Gui on 2020-02-27
Fun game, but it cheats sometimes. The timer keeps running but everything else is frozen. I can't move the blocks. There are many ads. I like being able to watch one to get bomb. I hate having to watch a long ad whenever I pause the game. Expect at least 2 long ads each game.
Rohan Chadwick on 2020-02-27
Would be a fun game, but it's a horrendous resource hog - burns through battery worse than far more complex games. The number of ads that you can't mute is too high, as well.
Sherri Parks on 2020-02-27
Love this game, only i have 1632 coins that doesn't transfer back to the game when my game ends....i never get to use those coins!!! Why??? Thanks for sharing!!
Christine Hamman on 2020-02-27
So my review was removed because I warned the people about how you subscribe them at R10 per day without asking their permission ?
Ambrosia Chapa on 2020-02-27
I had to uninstall because I was addicted. Theres lots of ads. I wish there was a way to stop them. Its Challenging but fun .