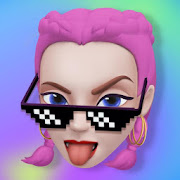 Face Cam is your personal 3D avatar maker and facemoji & memoji camera. You can create your own memoji and facemoji with tons of options. Share your face emoji on Snapchat, Instagram and TikTok to get more likes. • Personal Facemoji Maker Create your own facemoji to express yourself. There is a great variety of expressions for you to choose to fit your style and personality. • 3D Avatar Creator You can choose from numbers of skin tones, eye colors, hairstyles, hair colors, accessories and more to make a memoji looks just like you. • Magical Video Filters There are plenty of lit and magical video filters for you to shoot videos. Share your facemojis videos within iMessage, Snapchat, Instagram and many other social platforms! • Multiple Memoji Create multiple memoji avatars for your friends & family and have anytime and anywhere. You can take photos or videos with your BFFs, crush and your schoolmates using 2 people facemoji together. spice it up! • Get More Followers Fast & easy to share your facemojis wherever you like, such as Snapchat, Instagram, TikTok and other social media to get more likes for your post & story and boost your Snapchat, Tik Tok, Instagram followers.

Kendra Wyatt on 2020-05-25
Okay I think I already told you this before but I mean liketalk and stuff and when I die trying to download it and then it's just like it said face-to-face cam at the top and then it's like when it's like with all that beauty runs away my screen is just a black screen I don't know why is just a black screen but it's just a black screen when I get on it just like one second ago I just found out loading and I'm sorry yes Vine Ana Gabriel tu Stars cuz I don't want to be mean and that give you enoug
fool on 2020-05-25
everyone is having to pay money for this piece of garbage. i dont have money and this is literally just some knockoff Memoji thing or whatever its called. i even tried to close it but it just stayed on the same screen. hey creator, how would you like to hear that it was a waste of space and that i uninstalled it? hah, you just heard it. now, people, dont get this garbage. you can try it but its a waste of time.
Miriel Perez on 2020-05-25
I'm very scared to use this app. I'll tell you why. So I was on tik tok and I saw people use this app so I wanted use it because it was cute! But when I went to download the game,I scrolled down to see the comments on it and they said you pay a hole, lot of money just to make an avatar also, you can't even get out of the game! To be honest, I dont really recommend it.
joyceyluv20 on 2020-05-25
I don't really like it not one bit if you look into your eyes if you look into the eyes really really really deep might not believe me but I'm telling no one has looked in the eyes the I said I'm telling you I'm trying to keep you they can hack you and me
Mira Boydeva on 2020-05-25
I hate this game like if it hade a new update skills you don't pay for it a bet alote more people will install it is would give it 0 stare but then I could not write the review did was my face when I realised you have to pay =☻☻ 2
Annabelle Meadows on 2020-05-25
Hate it You seriously have to pay money like dude I have a tablet that's connected to my dad's phone and if you finds out that I bought some money from him then he's gonna be pissed
xolynnxo on 2020-05-25
I would give it a 5 star if it wasn't so laggy. The emoji face wasn't staying on my face, and whenever I recorded a video with it, it would make it much lagglier than the original.
Evani Willemae on 2020-05-25
This app is great but there are not alot of hair styles and accessories witch makes it a little bit boring and the character looks a little weird
lydiaelmi10 gamer on 2020-05-25
Do not get it took all my space then it wouldn't even load to get on game it was a waste of time does anyone know a app like this that works?
Lydia Bogan on 2020-05-25
I'm having problems, when I open the app it doesn't work and no matter how many times I get in the game the screen won't show.