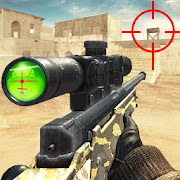 Modern Sniper Let’s play as a true sniper hero with action-packed battlefield shooting game. Equipped with a sniper weapon to become a shooter, long-range machine guns can cause disastrous damage to the attacker. The attacker does not know your existence in order to put your first shot, but at the minute you shoot, your firing will fascinate the attention of the rivals. There is no way to step back. So once the fight begins, make sure your own safety. Shooting the terrorists has never been straightforward and this gameplay will give you an offer to become the best sharpshooter with all skilled sniping abilities to bring down the deadly enemies on roads. Modern Sniper is an absolutely free action shooting game. Incredible and pleasing missions and various levels to make you insane to play this shooting game. Game Feature: Amazing FPS War Experience Real shooting and sniper effects Themes: Factory theme, City theme, Arabic city theme Various advance sniper weapons to use 15+ Breathtaking Challenging Missions 15+ Level ups