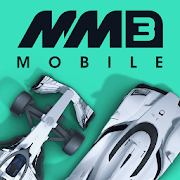 Motorsport Manager Mobile 3 is the ultimate race team strategy game. Build up your very own motorsport team from scratch, making every big decision. Hire the drivers, assemble the team, develop your car and mastermind your way to glory. • This is your racing team. Hire drivers, develop your car and invest in technology. • Work with your drivers to achieve the perfect qualifying lap. • Formulate the ideal pitstop strategy to win races. • Watch the race in real-time or jump into the strategy screens to take control of the action. • React to weather changes, crashes and safety car periods. • Win championships across the world to reach the pinnacle of motorsport. New in MM Mobile 3 ===================== GT AND ENDURANCE RACING With 6 new championships, MM Mobile 3 is bigger and better than ever before. GT races bring action-packed, wheel-to-wheel action, while Endurance is a Motorsport Manager’s ultimate strategic challenge, with 3 drivers per car and timed races! A STUNNING SETTING Monaco makes its Motorsport Manager debut! Manage your cars around la Rascasse, Casino Square and the Swimming Pool. It’s the ultimate test, rendered in a beautiful, detailed new art style. NEW FEATURES The Supplier Network sees managers grow their team’s presence around the globe, while Invitational Races are huge annual events, bringing international races with a unique twist. Mechanics are the new members of your team, and their relationship with the driver is all-important! GAME CHANGERS Votes on rule changes, dynamic AI team movement (including teams going bust and being replaced) and new difficulty settings mean that the world of motorsport constantly evolves – but the challenge stays at your level. ON-TRACK ACTION Energy Recovery System, with Hybrid and Power modes, mixes up every race! Will you boost your way past your rivals into clear air, or smartly manage your fuel levels to pull off a genius strategy?

TheDarthVader_GR on 2020-05-25
Running on android 10, oneplus 5t. After updating the phone, the game will not run at all. It says it requires additional permissions to download data. No pop-up tho. After manual allowing, it still says the same. Tried to go into beta, thinking it may fix it. The game now just plain crashes. Its a bit of a shame to have bought it, but now it not running correctly... I really enjoyed the game, but support feels really bad. Update 10/5: after removing the beta and reopened, its opening normally.
Anthony Adorno on 2020-05-25
Great game, immediately hooked on the mobile edition. Decided to buy this over the PC port of the first game due to pricing being much lower here. Relatively in depth game and you're always doing something. Graphics are the weakest part of this but the overall design language is pleasing. The in app purchases are essentially an easy mode and Toggle God Mode switch as one gives you extra in game funds and the other allows you to edit your game file. Both are cool but unnecessary; no ads or p2w.
Debosmit Naskar on 2020-05-25
Hi Playsport Games! From the first time I played MM3 I fell in love with it. In my view this is the most detailed offline race manager game for mobile. Your gameplay,controls are just amazing. But I have a request. Can you please add real cars on the circuit rather than a circle!I have played MM Online and you have added it there. It would be nice to see it on this game as well. One more thing, if the players can have a 3D view of their car and it will be a better experience.
Yorick Daelmans on 2020-05-25
Amazing game, great simplistic graphics, and you can do a lot in one season, very indeapth with car modification/updrading, and a lot of strategy is involved every race. Edit: (10-5-2020) well, I've just now come back to this game and it won't install... Looks like it has to do with the new online version... What's up with that, I don't wanna play online, and I've paid for this game, fix this man.. This is really sad
Barrett Rolph on 2020-05-25
Played this a bunch on my original Pixel XL. Just upgraded to the 3XL and now it won't install like a lot of others have reported. Fix it please. Edit 4-21 still broken and will not install or play. Will not install MM online until this game I've paid money for is fixed. (5-5-2020) I have now e-mailed the developer requesting a refund for their refusal to update. I will edit again with their response when i get one.
Jon Zephanius on 2020-05-25
I have loved MM from the start and bought all 3 games but now with MM Online released, this game I paid for no longer works! Keeps asking for permission to download additional files, then hangs. Is Playsport trying to force people to the freemium (and from the reviews, pay to win) Online? This is dishonest. You were once a great game maker but now you're just as bad as anyone else. Now I can't even play MM3 anymore?
Asd Bbk on 2020-05-25
Is it worth the money? Most likely (I forgot how much I paid for this but I spent 70h in it) Should I buy it if I'm not into this "genre" ? Maaaybe not. The first game of this series is free. Although not the same at all, it's a good introduction to the genre. Does it become repetitive? Yeah, slowly but surely. You will be captivated by your first 2 gameplays, and after is just addictiveness. Does it look nice? Yes
Bram Brugman on 2020-05-25
(One of) the best Android games out there. Very addictive and fun. Downloaded this like 3 times, because I thought I had seen enough of this, but nope. Only thing is I hope that there will be an update.
Andy Valentine on 2020-05-25
A really fun way to spend a lot of hours! Top: don't start too easy, or the fun is lost. Also, resist the urge to pause the races to give you time to think, and it becomes a much better challenge.
DROCON DRONE on 2020-05-25
I read alot of the reviews saying it does not work. So I downloaded it off the Internet, once I have found that it works for my self I will pay. Untill then FIX YOUR GAME.