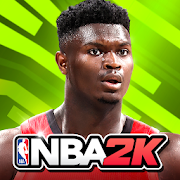 NBA 2K Mobile requires an Internet connection, a device with 4+ GB of Ram, and Android 8+ (Android 9.0 recommended). Season 2 offers deep card customization, more on the court options, MyPLAYER, and a newly updated 2020 roster. Experience console quality graphics and lifelike NBA 2K action while on the go. Collect your favorite NBA players, build your dream team, and then step onto the court in 5v5 matchups or real-time PVP. Use Drills to train up your players, compete in Seasons to earn rewards and new crafting materials, compete in limited time events for exclusive cards, and rise up the leaderboards on your way to become a legend. NBA 2K Mobile is the newest game from the NBA 2K franchise. Features include: • 400+ cards of your favorite NBA players and All-Stars • Console quality graphics and authentic on the court action • Build your ultimate dream team of players past and present • Join a Crew with your MyPLAYER or create your own Crew • Daily bonuses from the Checklist and logging in • Real-time PVP • Customize your MyPLAYER by appearance, equipment, and more • Challenge rival Crews to 3-on-3 games on blacktop Do Not Sell My Info: https://www.take2games.com/ccpa

Phy on 2020-05-30
The game is nice and all but i have one question, im about to get a new phone and i am no longer going to use this phone that i am currently using to rate this game, so if i bind my account with a Facebook or a Google play account will it be saved and will i have access to it on my new phone? PLS RESPOND I NEED ANSWERS I DONT WANNA LOSE THE MONEY AND TIME THAT I SPENT ON THIS GAME,THANKS DEV,and also pls change the fouling system (Shooting foul,Blocking foul,personal foul,flagrant etc.)
Cy Floriana on 2020-05-30
I would really love this game and give it a 5 star review except for one problem. The game has run fine in the few days I have had it. But today it has started playing really glitchy and laggy. I also keep getting an error message about the network while this is happening. This isn't on my end though. It's a brand new Galaxy phone and nothing else I play is having this issue. I wont put money into the game if this is how it's going to play.
Mohamed Afiq on 2020-05-30
could you just fix the crash issues? I've updated this game and hoping that the crash will be fixed but instead it kept on repeating everytime and please 2k fix this ASAP. The graphics are fine but the crash issues made me gave a 2 star rating but the others are all fine and please if there's an upcoming update do include some highlight plays and yes again the crash issues
joshua rivera on 2020-05-30
Love this game so much, I find more enjoyable than the NBA Live game created by EA Sports. This game finally released a MY Player option and you can upgrade your players. You also can play a live online game with someone instead of a simulated version of there team. Overall I rate this game a 4.7 out of 5, only drawback is that they try to much to grab money from you.
Boosted Coupe on 2020-05-30
Some players are underrated. Reach in fouls are insane. CPU always fouling but it's never called. User players miss perfect shots. CPU players always making contested shots and user players not. Need a way to make more coins becuz it's nowhere near enough. This game needs alot of fixing.
Nicholas Wan on 2020-05-30
Frequent network unstable after end of the game on domination... Winning not count and this is due to energy lost with no count.. the power doesn't correlate with the weakness for opponent during domination.. weaker opponent still dominate the game even significant weakness
Brian Yi Kai Tay on 2020-05-30
When facing a much lower power team compared to your team you will surely lose no matter how many times you replay that match. But when facing a higher power team compared to your team power it'll always be a win game or a tie game, which completely makes no sense.
H Tra on 2020-05-30
Biggest issue is switching players on defense which is very difficult. Shooting meter could be way better. Add automatic foul option when less than 20 sec remaining on the game. Recently app is freezing my phone.
Karan Chopra on 2020-05-30
Please fix a couple of things: 1. At times when the ball goes into the basket while shooting a three, the game shows out of bounds. 2. Make it easier to throw lobs. Would be a great great addition. Thanks.
Soccer 39 on 2020-05-30
Ok so this would be the best game ever but 2 things number 1 the network issue is pretty bad number 2 theres no joystick in crew games and that's rlly annoying so overall 9.8 out of 10