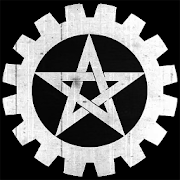 Necrophonic is an ITC app used for spirit communication and EVP research. 8 Sounds Banks: The audio has been mastered in a way to bring out various sound properties . Using Pro Tools I was able to enhance high, mid, and low range frequencies. I also applied other filters to create unique sound characteristics to help layer the audio and create an environment suitable for spirit communication. The audio itself is made up of phonemes, partial words, reverse audio, foreign languages, and other parts of speech that can help spirits communicate. Besides some basic phonetic sounds such as na, no, da, do, di, ma, may, etc. there are no real words of phrases contained in the banks. These sounds banks play in a similar way to that of my other app "Spiritus Ghost Box" but instead of 4 sound banks Necrophonic has 8 active sound banks. White Noise Sound Bank: This app also has an optional 9th sound bank called "White noise". This bank can be used alone or with the other 8 giving you a total of 9 sound banks. This audio is taken for the internal sounds of the famous DR60 recorder that is known as the "Holy Grail" of EVP recorders. This is not a White Noise Generator, this is a normal sound bank like the others but this one contains white noise from the DR60. Audio Effects: This app does contain Echo and Reverb audio effects. These have been proven to be the best effects to apply to ITC sessions. The echo can create audio that can be manipulated within the echo itself. Echo can also help in live, real time communication by repeating the audio and allowing you to better hear whats coming through. Reverb can be applied to the audio to create a spacious sound environment that will enhance audio manipulation.

Saphie Inferno on 2020-01-28
I couldn't get a response no matter what I tried. Being nice, being mean, invoking them, nothing worked. It sounded like a loop. I live in Hells Gate KY (Bobby Mackey's) and I legit got nothing. I tried contacting family members and had more of a response using a pendulum or Ouija board. It's nice the devs made this app and I know how much hard work they put into it, but it's just not real and it's not worth the ten dollars. I really hope they add a real spirit box that flips through channels.
stop criminalising the addicted on 2020-01-28
I can tell you without a trace of doubt that this app works I've been clairvoyant my whole life and I know a fake reading when I hear one or a fake app when I use one and this app is one hundred percent the real deal I'd stake my life on that statement that's how much I'm assuring you all that if you spend your money on this app it's not gonna be a waste of your money and you can take that statement to the bank and deposit it now cos I'm telling you with little patience and taking your time
Erin VanWyck on 2020-01-28
I recently watched one of my friends use this app in a grave yard. The voices would talk and one was a woman that would say "help me". We used the app a few other times before calling it a night. I decided to buy it today because I wanted to contact my father. He said he missed both my mom and I. I also asked if he wanted to die, he said no. My father went into the hospital because of fluid build up. He was in a coma for a few days but pulled through only to get worse and pass away.
Christine K on 2020-01-28
I have listened both in regular mode and in airplane mode. There are a myriad of blips, diphthongs, blurbs, vowel sounds, random words both forward and reverse, and other random sounds that are pre-recorded. I get better results from an EVP of an old-fashioned recorder or video. I've been communicating with and recording ghosts my whole life. I have thousands of hours of recordings of EVPs and other phenomena. What a waste of $$$! $10 doesn't even give you the option to record ... .
Dolly 'HulaDoll' Reynolds-Dolce on 2020-01-28
I honestly thought it was going to be prerecorded junk, but I've used it twice and both times was crazy. I'm sitting in my late grandmother's chair, and the 1st time I used it it said Elsie, which is her name! The second time it said Dolly, which is my name. My daughter asked me how I got the app, I told her I downloaded it for a fee. Immediately is said as clear as day "ten bucks" ...okay, I'm convinced! I didn't believe a phone app could be real.
Jaimie King on 2020-01-28
I just used it and im very up and down. I dont know what it real nor what is fake. How does a app scan radio frequency? I heard alot of negative comments and only to responses. I asked for a loved for one and then after i said the name all i kept hearing was the name. Im new to this. I did ask a personal question abd got an answer but i still dont know if it was correct of i just heard what i wanted to hear.
deven p on 2020-01-28
seems like a fun novelty but i don't think this is actually communicating with spirits. i started the app and didn't say a word. it sounded like a bunch of voices trying to talk to each other with bad reception.. i listened for about 30 minutes before saying something.. it repeats the same words no matter if you ask a question or stay silent. it's a fun superstitious novelty app.
Connie Marie on 2020-01-28
REPETITIVE NOISES NOTHING WORTH 10 BUCKS. This is totally worthless, i don't believe it's real and i would rather have an actual ghost box because i thought this would be better but it's just a bunch of pre recorded junk asked for my money back so i hope i get it soon. Do not waste your money. Just because YouTubers believe it don't mean it's truth
Chyanne Davis on 2020-01-28
I LOVE this app! It has gaven me a bit more closure from some deaths that have occurred in my life. My little brother came through the Necrophonic, and it was just so heart warming to hear it was him. "Hi Mum" even came through! Thank you for this app. 100% going to try on an actual Ghost Hunt!
hector alicea on 2020-01-28
I AM IMPRESSED.FINALLY AN APP THAT REALLY WORKS BACKES UP WHAT IT SAYS WALKS THE TALK.I WOULD RECOMEND THIS APP TO ANYONE WHO NEEDS ANSWERS AND A TRUST WORTHY APP TO BRING BOTH.THANK YOU. TO THE DEVELOPERS I LOVE YOUR VIDEOS AND WHAT YOU HAVE DONE WITH THIS APP IS BEYOND AMAZING.