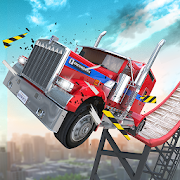 Have you ever wanted to see a huge and imposing truck in awe-inspiring crashes? Stunt Truck Jumping has you covered! In the game you will: - Control a truck on a steep slope - Make huge jumps - Crash and cause destruction - Get upgrades that will make you better and better Stunt Truck Jumping is a jaw-dropping game of constant thrills! If you like cars, excitement and fun you will surely find something to like here.

Rukamani Vishnoi on 2020-02-22
A little bit more than you know I was like I was just thinking about it and it was good to hear that I have no idea how much is it that way you can get a new one for me and my dad is a good night and sweet dreams and sleep well tonight and tomorrow is my favorite thing to me and you can come over to the and buy a in like a shower for the rest of your life with you I was going to get a ride to school tomorrow at the moment I love you so much fun with that being in the car and my mom Said
Kyle Digges on 2020-02-22
This would be an awesome game but you will spend WAY more time watching ads, it is ridiculous. Nothing wrong with a few ads here or there like other games but this game you are forced to watch an ad every single time you jump whether you want the bonus or not. Such a shame to ruin a game that could have been one of the greats.
Ramon Rodriguez on 2020-02-22
If you love ads download. I don't mind ads and have found other apps through ads. This game has an add after every round. It offers better rewards if you watch an add and if you say no it plays an ad anyway. Made it to level 2 and had to uninstall it. Watched more ads than game play.
Illumijoshy on 2020-02-22
More ads than gameplay. You will play the same level 30 times before making it to the next. The only real way to upgrade is even more ads. Played it for a good 30 min just to get to level 2 then deleted. Dont waste your time. Unless wasting your time is all you're after.
Jeffty232 on 2020-02-22
Alot of my friends played this game and its really fun and hard to beat (i beat it) and over some 7 days of playing i had lots of fun. Sadly after that there was nothing to play or experiment with so i kind of got bored of it.
Luke Engel on 2020-02-22
Decent game full of ads which makes it not fun. Gives you the option to watch an add to gain more money after each go. If you select no like I always do it will play an add anyways and then won't give you the extra prize.....
J M on 2020-02-22
Don't waste your time, I'll tell you why. Ad after ad after ad after ad after ad after ad after ad after ad (take a deep breath) after ad after ad after ad after ad. That's all this "game" is, ad after ad, you get the picture
Glenn Russell on 2020-02-22
When I start seeing political commercials on a freaking video game it's time to say goodbye. Anti-Trump commercials are not going to get any of my money or time. I'm a patriot and I support my President. Screw you people.
FedotenkoFan17 on 2020-02-22
Game is fun but there are way wayyy to many ads, I get watching ads for bonuses but when there are ads after almost every jump it makes the game very unplayable very quickly.. I had this for maybe 30m before uninstalling
Tim Brooks on 2020-02-22
Ads every single second of gameplay. Not worth anyone's time whatsoever. A shameful, pitiful example of how ad-pushing is ruining games for everyone including developers and no one has the balls to do anything about it.