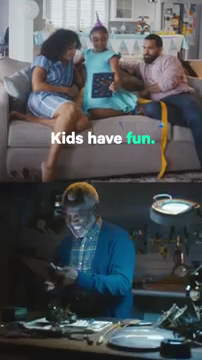 Messenger Kids — Made for Kids. Controlled by Parents. Made for Kids. Controlled by Parents. Parent Dashboard: Parents can manage their kids' contact list, and monitor messages on the Messenger Kids app. When kids block contacts, parents are notified. Fun Filters: Kid-friendly filters, reactions, and sound effects make video chats with friends and family even better. Worry Free: Parents can set usage limits when it’s bedtime, and there are no in app-purchases or ads. Creative Convos: Stickers, GIFs, emojis, and drawing tools give kids more ways to express themselves. Easy Start: No phone number required. We’re always working to improve Messenger Kids. If you’d like to share any feedback with us or for more information, visit messengerkids.com.

𝙳𝙴𝙱𝚄𝙶 𝙸𝙽 𝚃𝙷𝙴 𝚂𝚈𝚂𝚃𝙴𝙼...
miyuki & cookie - chan on 2023-02-08
𝙷𝚒 𝚖𝚎𝚜𝚜𝚎𝚗𝚐𝚎𝚛 𝚔𝚒𝚍𝚜, 𝙸 𝚛𝚎𝚊𝚕𝚕𝚢 𝚕𝚒𝚔𝚎 𝚑𝚘𝚠 𝚢𝚘𝚞 𝚌𝚊𝚗 𝚖𝚎𝚜𝚜𝚊𝚐𝚎 𝚢𝚘𝚞𝚛 𝚏𝚛𝚒𝚎𝚗𝚍𝚜 𝚊𝚗𝚍 𝚑𝚊𝚟𝚎 𝚐𝚊𝚖𝚎𝚜 𝚋𝚞𝚝 𝚘𝚗𝚎 𝚘𝚏 𝚝𝚑𝚎 𝚐𝚊𝚖𝚎𝚜 𝚌𝚊𝚕𝚕𝚎𝚍 "𝙼𝚊𝚝𝚌𝚑 𝚁𝚎𝚖𝚊𝚝𝚌𝚑" 𝚑𝚊𝚜 𝚊 𝚋𝚞𝚐 𝙸'𝚟𝚎 𝚛𝚎𝚌𝚎𝚗𝚝𝚕𝚢 𝚎𝚡𝚙𝚎𝚛𝚒𝚎𝚗𝚌𝚎𝚍. 𝚆𝚑𝚎𝚗 𝚠𝚎 𝚙𝚕𝚊𝚢 𝚝𝚑𝚎 𝚐𝚊𝚖𝚎, 𝚠𝚑𝚎𝚗 𝚘𝚗𝚎 𝚘𝚏 𝚖𝚢 𝚏𝚛𝚒𝚎𝚗𝚍𝚜 𝚠𝚒𝚗 𝚋𝚢 𝚏𝚘𝚞𝚛 𝚑𝚎𝚊𝚍𝚜, 𝚝𝚑𝚎 𝚜𝚢𝚜𝚝𝚎𝚖 𝚍𝚘𝚎𝚜 𝚗𝚘𝚝 𝚌𝚘𝚞𝚗𝚝 𝚝𝚑𝚎 𝚠𝚒𝚗. 𝙰𝚗𝚍 𝚘𝚗𝚎 𝚝𝚒𝚖𝚎, 𝚒𝚝 𝚍𝚒𝚍𝚗'𝚝 𝚌𝚘𝚞𝚗𝚝 𝚊𝚗𝚍 𝚝𝚑𝚎 𝚗𝚎𝚡𝚝 𝚝𝚒𝚖𝚎, 𝚒𝚝 𝚜𝚊𝚒𝚍 "𝙳𝙴𝙱𝚄𝙶 𝚆𝙸𝙽𝚂!" ... 𝙿𝙻𝙴𝙰𝚂𝙴 𝙵𝙸𝚇!!!!
I am astonished!
poggers yeet on 2023-02-08
This app is incredible. My daughter loves it so much. She is moving away to a different part of the country and is very happy she will still be seeing her friends. she has explained to me that she would rather it be landscape, instead of portrait. I asked her to back up her statement, and she had no clue what to say. 🤭 needless to say it is a fantastic app which helps children connect with there friends. What’s not to like? As a parent, I would like to recommend this app to anyone who wants there child to be able to socialise. Congratulations, this is one of my daughters favourite apps!
Update requests pls
cute play ally on 2023-02-08
This is a very nice app but it has a few problems my child hates, 1 no landscape mode, even regular messenger has landscape but not this one, 2 she misses the bubble contacts, it’s more exciting to look at the bubble / box contacts than the lined ones we have now, she cannot get over the old contacts even though it’s been 2 / 3 years, 3, there should be an option to if you add one person you should get their siblings automatically added, it’s good for social skills and making friends Anyways great app - Ally
PLEASE HELP ME
Suzy4969 on 2023-02-08
Ok so my friend was being annoying on calling then ending over and over then I blocked her But I wanted to unblock her but it was saying you can’t unblock and i was very sad so we were texting on the group chat together with our friends but I called her but then it said couldn’t get on then she called I joined and we where talking but she said in 5 mins we will get glitched out of the call so we both put on our timers for 5 mins and mine went of then hers did and the call went like she got dropped
Good but some update requests
cute play ally on 2023-02-08
Kids messenger is a very good app but my child liked the old layout better just like the pictures on the App Store, she complains to me about the lines for contacts because after 2 years she still likes the box contacts better like the App Store pictures, second request my child charger broken 4 times because she has to flip the iPad just to talk so is it possible to do landscape mode? Anyways this is a very good app for my child
Tysm! I love it!
Pilylily123 on 2023-02-08
Okay it all started when, I searched up messenger kids apps. And at first I asked my mum and she thought I would talk to strangers, so I downloaded it my self as the daredevil I was and discovered that my friends had it, so I put them all on my messenger! And I showed my mum that there were NO strangers! And she was convinced, so she let me keep it! :) I was happy then, and that’s my story <3 PS. I luv my frens 😚✌️
Messenger kids is so fun! But could have more updates
IsabellePuppy on 2023-02-08
Hi! I love using messenger kids is fun and I can chat to so many of my friends and family but I want to know if you can fix this maybe and update on messenger kids could be like what if I send something inappropriate to one of my friends by accident but I can’t delete that message so it stays there forever so maybe you can update messenger kids and you can delete any messages you don’t like thank you
Well I don’t know 🤷‍♀️
bcdwyubchuwdbbcugwdcugdwb on 2023-02-08
Well I can’t really say anything yet however all I can say is that without a Facebook account this is extremely difficult I couldn’t even make the account because Facebook wasn’t having it. Like they would say your account has been suspended like WHAT?!!? That honestly frustrated me cuz it took forever but that was Facebook sorry if I wasted ur time
Lots of bugs that need fixing
albo lol on 2023-02-08
It is a good app for texting but I had problems calling people due to these bugs 1. Cannot hear friends while in another app (I know how to get rid of it but it’s occurring so plz fix it) 2. Barley hear friends 3. Cant hear through the headphones when calling someone instead the audio still goes through the iPad (only on Messenger Kids)
I LOVE THIS APP BUT… 😡
uwu kid 1234 on 2023-02-08
Me and my friend have got into a little fight I blocked her and we solved it out on another app (Roblox) and I tried to unblock her and it said that I have unblocked her and it did not work it’s still said that we were blocked and I need your company to do something NOW PLEASE I WILL SPEAK WITH THE MANAGER !!!!!!!!!!!!!!!!!