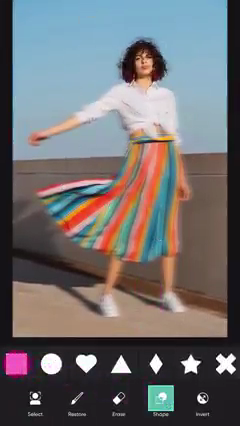 Join the Picsart community of over 150 million creators around the world. With the Picsart photo editor and video editor, you can bring your creativity to life. Make professional-level collages, design and add stickers, quickly remove and swap backgrounds, try popular edits like Golden Hour, Mirror Selfies, and retro VHS or Y2K filters. Picsart is your go-to, all-in-one editor with all the tools you need to give your content a personal flair and make it stand out. Picsart Features: PHOTO EDITOR • Try trending filters for pictures and popular photo effects • Use the Background Eraser to erase and replace backgrounds • Clean up pictures and remove unwanted objects with the Remove Object tool • Use millions of curated, free images or edit your own pictures • Add text to photos with 200+ designer fonts • Retouch selfies with hair color changer, makeup stickers & more • Blur backgrounds with our AI-powered smart selection tool • Quickly flip & crop photos • Add stickers to pictures and create your own stickers VIDEO EDITOR • Create and edit videos with our easy-to-use video editor with music • Take your IG Stories, TikToks & Reels to the next level • Add music to your videos using our extensive video editor music library • Crop video clips to the perfect dimensions and ratios • Try Glitch video effects and other trendy filters in the video editor • Trim videos or use smart video merger to blend videos • Design using the slideshow maker with music • Add your best moments to a video collage COLLAGE MAKER • Create on-trend photo collages with your favorite pictures • Try photo grid collage, freestyle collage, scrapbook, and frames for pictures • Go viral with our meme generator & share with friends • Use the Story Maker and level up your Instagram game with Story templates STICKER MAKER + FREE STICKERS • Discover over 60+ million Picsart stickers • Add stickers to pictures to turn up the fun level on your edits • Download any sticker for free and use it instantly • Make your own clipart and create unique custom stickers PHOTO EFFECTS & FILTERS • Outline selfies with the popular Sketch effects • Turn portraits into artistic masterpieces with Canvas effects • Make Drip Art with dripping effect stickers & customize the blend mode • Cartoon yourself in seconds with amazing Magic effects DRAWING TOOL • Use Picsart Draw with customizable brushes, layers, & pro drawing tools • Doodle on pictures and create a transparent clothes effect • Start with a blank canvas to create art and illustrations from scratch • Play with Doodle Art and scribble away for hours REPLAY • Recreate trending edits in a couple of taps. Cut editing time in half with easy customizable steps • Edit multiple pictures in the same style. • Keep your IG feed on-trend and consistent by creating personal presets PICSART GOLD • The Picsart Gold subscription grants access to NEW EXCLUSIVE content all the time. Get all the top features with an ad-free editing experience. --- Start your Picsart Gold membership with a free trial - limited to one per Apple account. Once the trial is over, you’ll be charged a nominal subscription fee. Your Gold subscription will automatically renew unless auto-renew is turned off at least 24 hours before the end of the current period. If your subscription is subject to any promotional discount, the discount will expire upon the end of the current period & you’ll be charged the standard rate upon renewal. Go to your Apple account to manage your membership & to turn auto-renew off. Your Apple account will be charged when the purchase is confirmed. Terms and conditions: https://picsart.com/terms-and-conditions About Ads: https://picsart.com/privacy-policy#interest-base

I use this for making memes and silly images—guess not.
Mopsspoof2020 on 2022-12-04
So back in 2021 I believe I had bought an annual subscription (1 year) of Picsart gold. It was around 80 bucks CAD. It activated for around two weeks and then switched back to the free version despite me purchasing it. This app is extremely laggy, and it’s got annoying advertisements that don’t make the lagginess better. I’ve come to dislike it and I don’t want to purchase another subscription just for it to be usable, the urge to uninstall it is so strong now. My subscription (that doesn’t give me what I payed for) ends exactly on January 6 2023, and I’m sure I can give you guys the receipt for proof as well. But my guess is that y’all won’t give this any attention anyways. I just want to make stupid memes and I can’t even do that. Wow.
Ok
me and dont take it on 2022-12-04
It’s good for photos But it’s almost impossible to edit videos. Without the premium you can only add a video with another video and that’s basically it. But it’s good for photos Also for the videos You should take some of the premium off it so you can add music for the free version Even if it’s just from photos or something but all you can add is songs that Picsart already has which isn’t a lot But over all it’s a pretty good app. 5 stars if we could have more on the free videos.
Not worth It. Big mistake
AnnoyedYYC on 2022-12-04
I’ve got an iPad Pro, and even then the app has cashed 3 times, frozen 4 times and s res randomly I’ve been kicked out of it three other times; All while in the middle of trying to do some of the graphic work I hoped this app would fill the need for. Incredibly disappointing total waste of my money. There are other better apps, they may cost a little more but they don’t kick you out after you give them your money. Not Happy At All
What happened?
17780211ccccrystal on 2022-12-04
Used to be so good. Even with ads. Now it’s garbage. Your ads don’t even run properly. It freezes when the ad appears…..and nothing else. I hope those slots companies and BCIT using your app to promote their brands get a refund. Also, you used to be able to pick the album you’d like your pictures from, now all I can do is use the recent album.
No to Facebook
NorthernSunrise on 2022-12-04
Until recently have been very happy with this app. HOWEVER, it no longer allows users to select photos from your iPhoto app folders, only recents, but you can select from Facebook and it’s ilk. So, you have to sort through several thousand photos on your device in exchange for being able to go through Facebook, Instagram or DropBox. Terrible.
Great app
NellyLama on 2022-12-04
I’m a paying member of WhatsApp. It helps me create good artwork. It started by being a serious editing tool but has evolved into one that adds superficial lights and effects instead of creating basic editing tools as in its ‘magic’ tool that it hasn’t enhanced or added on anything for years. However, it remains to be a precious tool for me.
Fix the bug.
Lenstar346 on 2022-12-04
I love this app but ever since the new update, when I go to add a photo while editing it doesn’t display all of my other photo albums. I paid a lot of money for Gold, so this bug is a hassle because then I have to scroll through all my photos to find the desired one to be added. Please fix this bug and then I will give it five stars.
Creativity
bestiepooo on 2022-12-04
This game has shown me a lot of creativity and I am really thankful for that I love this game and I rate it five stars I love the creativity that I’ve done in the game and I’m really thankful for this game I love it so much so as I said I rate it five stars
SO FRUSTRATING!!!
jiro186 on 2022-12-04
I used to love this app and wanted to buy premium to use some of the more features.. but it wouldn’t let me for some reason! No matter where I clicked, on the adds for premium/gold or on the website it wouldn’t let me get it! So frustrating 🙄
Update gone wrong?
DH19863 on 2022-12-04
For some reason I cannot access my albums anymore when I want to upload a signature onto a photo. I have to find the signature in my „recent“ photos which are ALL my photos… This is on an iphone. Will there be a fix?