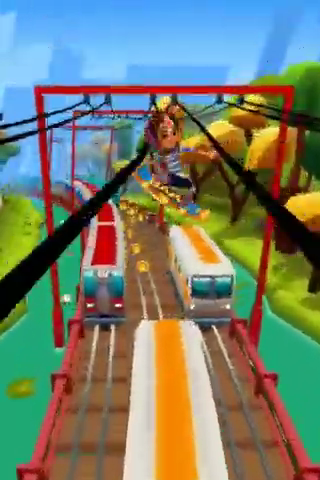 Love the game itself but many flaws…
ToniMontana76 on 2022-11-28
The Game is Great in general y kids which are now grown used to play this game now my grandkids live playing …but customer service is disgraceful!! We made many purchases for certain characters and boards or bundles…it kept telling me we could join. Our accounts which once I did due to not paying for those items on both devices once we did we lost most of our characters that not only were either Bought and Paid for or earned!!! Once I contacted on several occasions customer service o thing was ever done I kept being told we will check into this matter and that was almost one year ago so. Ow we DO NOT PAY FOR ANYTHING!!! Alot of these games and companies get your money but once a glitch happens then nothing no refunds not even to just replace wuts been taken smh
Bravo
rljjfjavkduf on 2022-11-28
Le problème c’est que je suis pas grave lol lol je suis en train de faire un ptit de mon message je suis en train de faire un ptit je suis en train de faire un ptit je suis en train de faire un ptit je suis en train de me préparer et luca que tu vas faire le ptit et tu peux t’appeler je te réponds bisous bisous xxxx je te fais un ptit je te fais plein plein d’amour je te reviens vite et toi je te fais des bisous xxxx que tu
Cool
Màn màn on 2022-11-28
You made a Cool game but you should add a box saying that “ Are you sure you want to use this booster? “ Because sometimes I accidentally click the boosters like the blue one and the red one (The ones at the start when you begin running) It’s also because my sister keep waisting the hard work I did for the boosters and that just wasted my time on those. But she doesn’t know what no and yes means so might as well add it.
This is 😊
RubyHawk123 on 2022-11-28
Literally obsessed with this game! Me and my friends on the subway start playing subway surf’s it’s literally amazing! I like to do a completion who can get the highest score with my friends and so far I’ve won:) love this game one thing I hope you change is how much the characters cost it’s some what understandable but I think maybe lower the prices down!! Other than that amazing game! :$)
Used to be good
babehoney on 2022-11-28
The game was fun until someone hacked the game. That person gets the high score everyday. Complained about it . Nothing happened. The company supports the hacker. Don’t put money in this game. The hacker gets everything free. And that is what the company wants. Would give it less than one star but not able to.
Why subway surfers is fun and the best
Yusmac on 2022-11-28
It’s free. You can become first but not if ur versing me. I’m first so ya try to beat me in it if ya beat me congrats 🎊🎉🎈🍾 U win. Now that’s three reasons You should play subway surfers or else OGA BOGA OGRE WILL HAUNT U AND HUNT U AND EAT U TO DEATH So good bye 😈😈😈😈😈😈😈😈😈😈😹😹😹😹😹😹😹😹😹😹.
Best Game In The Universe
dawn565 on 2022-11-28
I am in love/addicted to this game and I love it with my whole heart! I can’t put my feelings into words is how much l love this game! Customer service is great and there are so many new skins. Only cons: Glitches, and so many things that it is asking you to buy. No adds unless you want to revive.
Favourite game! <3
lulu baer on 2022-11-28
My best friend said to get this game so I did and when I played I said what’s your high score and my bff said oh it’s 3m and I was in shock and now mine is 1m! Anyway you definitely should get this game! <3 it’s so addicting and not that many ads and more gameplay this game is amazing! <3<3<3<3<3<3
I love it
yogourt a la on 2022-11-28
I love this game because there is no ads but I would love if you could make it harder I love it 5 stars 10/10 it is so much fun thanks for this game it is my favourite game ever played on my iPhone so I can’t wait for you guys to continue this journey Thanks for everything
What I think of subway surfers
l.levelup1 on 2022-11-28
The game it’s pretty fun but the things that I don’t like is that most of the stuff you have to buy so I’d probably make 2 or 3 things buyable and the other ones just make them hard to get so the game is harder and more tuff for the player :)