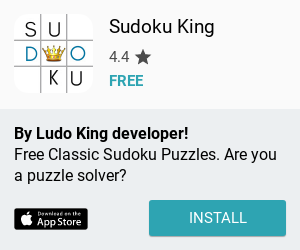 Welcome to Sudoku King™ - A Number Game! A game by Ludo King developer! Welcome to Sudoku Puzzle - Free Classic Sudoku puzzles challenge! Sudoku King is most addictive and challenging game with 1000's of classic Su Doku puzzles. Daily Sudoku puzzles, 365 days puzzle, daily challenges and 4 difficulty levels! A best Sudoku game for all aged mobile puzzle game lovers. A mind exercise game designed for high challenges, gives you a unique Sudoku game experience with a great graphical interface. Become a center of attention as a smart and fast puzzle solver with high IQ that everyone will admire. Master Sudoku - the evergreen puzzle game for smart people! Sudoku (Japanese: 数独) originated as a puzzle game which had the concept of Latin squares where users had to place numbers 1 to 9 into each grid cell in such a way that the number had to appear only once per row or per column or per mini-grid. Sudoku King is the same as the old classic Sudoku puzzle game, a well designed exercise mental muscle. Sudoku has been classically known to improve problem-solving speed and IQ, a number games. It is a great brain exercise to improve the mental capability in children. Sudoku King is a free Sudoku game for puzzle game lovers who like to crack challenging game levels. A range of different levels available in the app for beginners as well as experts. Features - Clear, simple design - Daily challenge included - Play with relaxing music - New Leaderboard added - State of the art graphic grid style and soothing colors - Play in two themes - black or white - Plenty of challenges in 4 different categories - Easy, Medium, Hard, and Expert - Play World Challenge in different countries like USA, Singapore, Egypt, India, Dubai, France, etc. - Get statistics to learn about your game performance - Upgrade the game by purchasing hints packages - Play country challenge and reveal famous tourist spots and monuments and know about them This is the sodoku game for sudoku lovers. If you play soduku game, you should download the suduku game. Sudoku King has 4 difficulty levels. Download now and play sudoko everyday. How to play Sudoku? Sudoku solver offers a brainy numbers challenge with balanced difficulty levels for all Sudoku lovers. Place numbers from 1 to 9 in empty grid cells that need to be filled without repeating within the row, column or square. You can note the probable numbers in the cells to make the game easy. The puzzle gets solved when all the cells are filled without repetition of numbers. Want to take small breaks from your boring routine and exercise your brain? Sudoku King gameplay not only kills time but also sharpens your logical mind. It is a great mobile Sudoku game for kids. Enjoy this user-friendly, colorful and challenging brain puzzle game. Install Sudoku game for free today and become a Sudoku King!