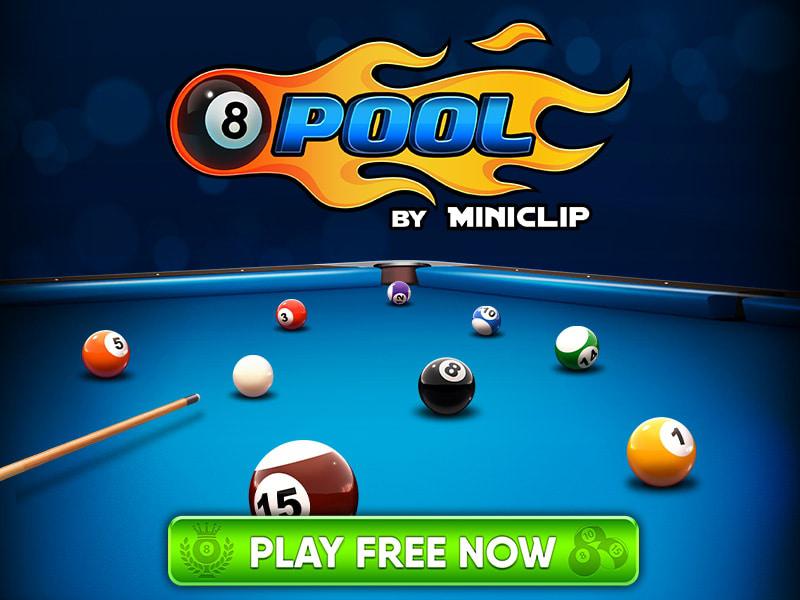 Do you want to play in the world of pool games? 8 Ball Pool is an addictive challenging game based on real 3D pool games, where you will challenge your friends online. Become a master of the pool! The game 8 Ball Pool is easy to win. You just have to select the pool table and get ready. Join us and challenge your friends to this ball game in PvP mode. Use your pool strategie with the cue wisely in this online multiplayer ball game as every round will be more difficult after each level. You can play in multiplayer or PvP mode in different pool tables. Become the best pool player and challenge your friends in this pool game.! You can play pool in multiplayer or PvP mode using different balls and table types. 8 Ball Pool is designed to help your intelligence. You will improve the aim when shooting balls with the cue. CHALLENGE YOUR FRIENDS Playing pool in multiplayer tournaments with friends is easy: Sign in for free with your Miniclip or Facebook account and you’ll be able to challenge your friends straight from this multiplayer 8 ball game. Challenge friends to a PvP pool match on the go. Aim and shoot your best balls with a customized cue in our online 3D PvP tournament! PLAY FOR POOL COINS AND WIN EXCLUSIVE ITEMS Customize your cue and pool table! In every competitive PvP match you play in our league, there’ll be Pool Coins at stake – win the match and the Coins are yours. You can also buy new items in the Pool Shop. Compete in our 3D multiplayer league and become a master of 8 balls in 3D! The 8 Ball level system means you’re always facing challenging players in the 8 ball league. Play multiplayer 8 Ball Pool to increase your ranking in our pool league and get access to more exclusive 8 Ball Pool match locations, where you play and compete against the best online pool players. 8 Ball Pool has different match levels: It doesn't matter if you're an amateur or a pro player, take your chance in our PvP competitions with your friends and other players and win the pool challenge: Aim with the cue and prove your skills in this free 8 ball online tournament. *This 8 Ball Pool game requires internet connection. Play on the Web at miniclip.com/pool TERMS AND CONDITIONS: http://www.miniclip.com/terms-and-conditions PRIVACY POLICY: http://www.miniclip.com/privacy ------------------------------------ Miniclip: http://www.miniclip.com Like 8 Ball Pool: http://on.fb.me/Wx4f23 Facebook: http://facebook.com/miniclip Twitter: http://twitter.com/miniclip