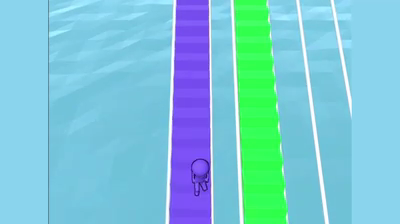 Collect blocks of your own color, place them on a bridge of your choice. Don't let others build on your bridge. Hit others with less stack than yours to drop their blocks!

HORRIBLE GAME DO NOT DOWNLOd
t3mpting_ on 2021-10-21
1 TOO MANY ADS 2 BAD GRAPHIC 3 LAGGY EVEN WHEN YOU TURN OFF THE WIFI IT WONT LET U PLAY SO U HAVE TO LIVE WITH SO MANY ADS ITS RIDUCULUS I AM OUTRAGED THAT THEY CONTINUE TO KEEP AWFUL GAMES LIKE THIS ON THEYRE APP STORE AND EXPECT PEOPLE TO BE OKAY WITH THAT THIS IS MADNESS DONT EVER RECOMMEND SUCH A TRASHY GAME TO KIDS AND JUST PT GET RID OF ADS THAT ARE SO ANNOYING YOU HAVE TO PAY I HAVE TO PAY YOU SO I QONT BE BORED OUT OF MY MIND????!!!!!???!!! YOU NEED TO FIX THIS PRONTO RIGHT NOW IF YOU DONT I I WILL PROPER AUTHORTIES TAKE CARE OF THIS OURAGEUOUS PROBLEM THIS GAME HAD BAD GRAPHIC AND NOT ONLY THAT ITS FILLED WITH BOTS BECUASE NO REAL PEOPLE WANT TO ACTUALLY PLAY THIS STUPID GAME I HOPE U TAKE THE PROPER STEPS AND HAVE THIS FIXED !!!! NOW
Way too many ads!!
Stylez79 on 2021-10-21
This game is cool & all but could be a lot more fun if it wasn’t for all the “ADS”!! The ads are seriously overwhelming. Ads before the game if you want to start with blocks, ads while playing the game (yes it cuts out during gameplay for a freakin ad) ads when you win & more ads before you get to start your next game & then the cycle continues. I’ve even had it get stuck on an ad & wouldn’t close out when the ‘x’ appeared so you could close the ad it just kept starting the ad over & over & over again… the only way I was finally able to get out of the vicious ad cycle was to completely close out of the game. My suggestion… do not download this game unless you like watchin more ads then gameplay. I’m uninstalling this game now!!
Don’t download this app, nearly unplayable
Itunesisthisnicknamegoodenough on 2021-10-21
Ads ads ads a ridiculous amount making gameplay literally impossible. Ads before level. Ads after level. Ads in the middle of the level. Ads if you want to unlock anything. Ads that glitch out the whole game and make the app crash. I truly believe any positive review for this game is bought (presumably through the ad money). Do yourself a favor and do not play this game. It’s not a game it’s a series of ads with barely playable game play briefly in the middle
Terrible
coop698762578 on 2021-10-21
Halfway through the run you get an ad. Then you finish the round and you get an ad. You’re literally watching ads more than you are playing. Don’t get me wrong solid concept of a game and would be great. But I’m not gonna play for 15 seconds to watch an ad in the middle of the run and then play 15 more seconds to get to another ad. Poorly planned out. Ruined the fun of the game for sure. I’d give it a 0 star if I could.
This game is not worth your time
Panther-44 on 2021-10-21
The thousands of games like these that have more ad time than gameplay is not worth a single star. This game is extremely inflated in its rated and its all fake. These reviews get bought thats the truth. You get an ad before a level, IN THE MIDDLE OF THE LEVEL, and after the level. For every single level. This probably took 30 minutes for the devs to make and its a cash grab. This is unethical game making.
Ad in the middle of the game ?
Jasmineeexxxx on 2021-10-21
No thanks ! What a shame it can be a good game. Deleting. Beginning ad Middle ad End ad Choose if you want ad to double points. Ad anyway 2 minutes of ad for 30 second game per round EDIT stolen from another review: turn on airplane mode to avoid ads at the start of the level 💖 EDIT: the number of ads has reduced significantly ill bump it to 3 stars
Too many ads
SamNSer on 2021-10-21
The game itself is fun, however there are so many ads. It will literally stop you in the middle of a level to make you watch an ad, plus an ad before and after each level. Oh and an ad shown if you do anything within the game. It makes the levels frustrating because you’re in the zone and then mid play BAM! Freaking ad!
Can’t even get through a race without a surprise ad
Meg1123581321 on 2021-10-21
You can’t even get through a rice without an ad popping up. It’s like a commercial right before the credits. As off the watch an ad to get a new skin, watch an ad to be revived, watch an ad to play a game… it’s a little much. Gave it two stars because at least it’s the game it appears as in the ads for the game.
I mean it’s ok
bgvbjv on 2021-10-21
I would love it if you could do a few updates my ideas 1 please make pets like penguins or horses or maybe even sea ho horses! 2 can you make is please so that we can design our you know pet and human 3 I don’t have a three!! Ok please use these helpers they might help get more people playing! Bye 👋
Royally upset
Csepulveda86 on 2021-10-21
I purchased this game before your large update and had a ton of skins and coins from winning and no ads. After the update, the game wouldn’t open so I deleted and reinstalled. Lo and behold, it won’t restore my previous purchase and my progress is lost! I want my money back or my purchase restored!