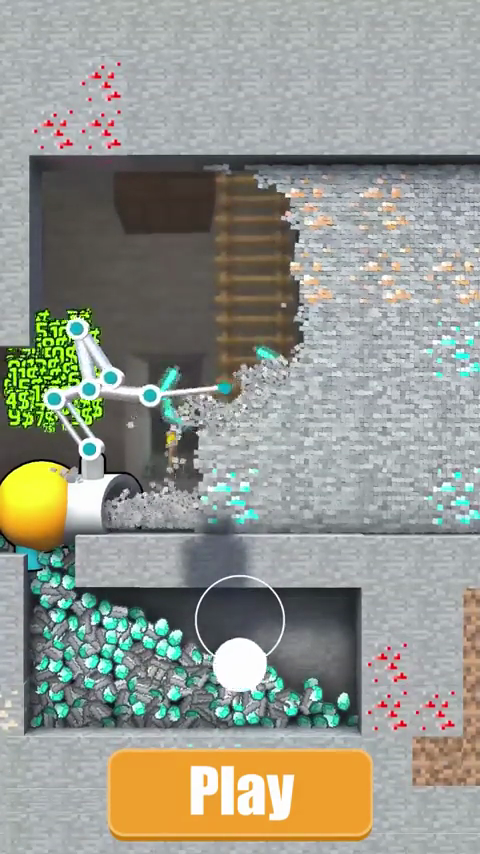 Upgrade your characteristics and become more and more destructive! Tear down this wall to the ground!"

Level 11 unbeatable
Redmatt343 on 2022-07-02
Just to let you know. There is no point in playing this game after level 10. I have tried Everything with maxed out abilities and the crusher can not reach the top right corner to finish the stage. I was only playing this game to pass the time. Even tho the ads it is attempting to load makes the game super laggy and almost unplayable at times, I took it more of a challenge to see how far I could get before I got overly frustrated… I would still likely be playing the game giving y’all ad revenue, if there wasn’t an impossible level. If this got fixed I might play it again to pass the time.
Pretty fun
wduwtkdkm on 2022-07-02
This app is pretty fun. It's a good way to pass the time. There ARE a lot of ads though, but I got the ad-free version because I felt like splurging. My main problem is that there are like 10 levels before they start repeating themself, and it doesn't look a lot like it did on the ad on Snapchat. The main reason I got it was because it reminded me of the Curiosity cube thing back in the early 2010's. If you don't know what that is, look at Joeseppi's video on it.
Good game ruined by a money hungry developer
11111mynicknamewastaken on 2022-07-02
I understand that everyone needs to have a source of income to survive but the number of ads is insane! A single ad after every run! Also, for all the money the developer gets from ads you would think that the game could be designed to not be so laggy but it is hard to play at all. My game actually crashed several times and wasn’t even able to play an ad and would just freeze. Overall good idea crappy execution.
Too many ads.
Dyl Wayne on 2022-07-02
I like to play and enjoy the game, and this one is very easy to do so. However, I don’t like how EVERYTIME I’m done with something in this game, there’s an ad. Also, don’t like how it requires internet to play. All in all a great game, but will be uninstalling due to internet and ads. Cant enjoy it if you’re without WiFi/date (somewhere there’s no Sevice) and if you’re watching ads more than playing the game!
Very fun game!
BruceMaGavin on 2022-07-02
The game is fun and simple, but there are 30 second ads after every match, which in the beginning only last for like 10 seconds. There’re also ads on screen while playing. Also when the adds try to load in, causes the game to freeze/lag. Also you cannot bypass the ads with airplane mode, the game won’t work without internet. I would love this game and play it a lot but I’m not dealing with these ads…
No words…
YourLocalHotWeather on 2022-07-02
Level 2 is so hard just for a starter, it’s very addictive yet I need internet to play it? Just to move a crusher I have to use my inter to just move a crusher? If that’s how it’s gonna be pay my bills. And I don’t wanna be using my internet to play that game but if you pay my bills I’ll reconsider, I had to spend over 20,000 just to get pass lvl 2 that stupid..
Fix this or give me my money back
Kcrino on 2022-07-02
I like the game it’s fun to pass time but the amount of ads is just ridiculous so I fell into the stupid little trap all you ad games want us to and I payed to get rid of the ads but after every game when I press no thank you to the ad it still makes me watch an ad please fix this because I literally payed to remove them and they’re still there that’s ridiculous
It would be great but...
Derderpfarts on 2022-07-02
Why on gods green earth do I need an internet connection to run this game? I want to be able to play it on the plane when I travel, but you need an internet connection, and for the life of me, I can't figure out why. Can the devs please explain what part of this game requires the internet? It seems as though it SHOULD function perfectly fine without internet.
Ah
boy yett on 2022-07-02
Ahhhhhhhhhhhhhhhhjhhhhhhhhhhhhhhhhhhhhhhhhhhhhhhhhhhhhhhhhhhhhhhhhhhhhhhhhhhhhhhh🍌🍌🌭🍌🍌🌭🍌🍞🌭🍌🍌🌭🍌🍌🌭🍌🍌🌭🤡🤡🤡🤡🤡🤡🤡🤡🫥🫥🫥🫥🫥🫥🫥🫥🫥🤥😐😐😐😐😐😐😐😐😐😐😐😐😐😐😐😐😐😐😐😐😐😐😐😐😐😐😐😐😐😐😐😐😐😐😐😐😐😐😐😐😐😐😐😐😐😐😐😐😐😐😐😐😐😐😐😐😐😐😐😐😐😐😐😐😐😐😐😐😐😐😐😐😐😐😐😐😐😐😐😐😐😐😐😐😐😐😐😐😐😐😐😐😐😐😐😐😐😐😐😐😐
Ads
Unsatisfied user 001 on 2022-07-02
This game has the potential to be a time taker but there is an ad after every time the fuel runs out which takes about a minute. An ad a minute just kills the fun. Hopefully this review is read and they do something about it. Ads are out of control these days and I’m sure it’s done on purpose to take money. DELETE. Do not download.