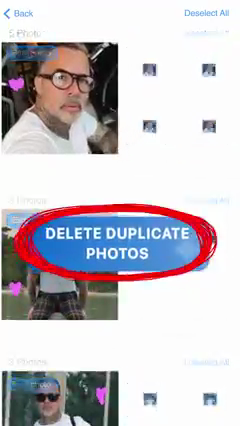 LET’S FACE IT: CLEANING UP YOUR PHOTO LIBRARY IS SO BORING! Cleanup is here to make this process easy, fun & safe. CLEAN UP YOUR GALLERY IN NO TIME Swipe left — to get rid of unwanted photos/duplicates Swipe right — to keep the memories that actually matter to you You’ll be surprised to see how many unnecessary photos you’ve been keeping in your gallery! ONLY KEEP THE BEST PHOTOS In a bunch of similar photos, Cleanup will suggest to you which one to keep Cleanup will suggest to you the photo that... ... you’re directly looking at the camera ... you’re smiling ... has a good focus ... you edited or favorited in the past Still, you decide on which one to keep, we don’t delete any photos without your permission. YOU HAVE THE FINAL WORD Think of the Trash folder in your computer, Cleanup has exactly the same. After you’re done with deleting, Cleanup asks you to do a final review; so that you don’t delete any photos by accident. RELIEVE STRESS WHILE STAYING PRODUCTIVE Honestly, we’re now pretty sure that our biggest competitors are cute kittens, pimple-popping videos, or your favorite puzzle game. But here’s what’s unique to Cleanup: After you spend some time on our app, what you get is a clean & organized photo gallery - not a guilt-provoking waste of time! MOST SECURE WAY TO CLEAN UP YOUR LIBRARY Unlike other apps, you don’t need an internet connection to use Cleanup. Cleanup works locally (offline) on your phone, so we couldn’t misuse your photos even if we wanted to :) SORT VIDEOS BY SIZE - DELETE THE LARGEST ONE FIRST Easily start with that 2GB video that’s been sitting in your gallery for a long time. Payment & Subscription Terms: Choose between the following subscription options for unlimited access to all features: • Weekly Subscription • Yearly Subscription FREE TRIAL FOR 3 DAYS - OFFERING UNLIMITED GALLERY CLEANING FOR A LIMITED TIME ***You may cancel your subscription at any time*** Cleanup’s free trial allows you unlimited access to all features for the duration of 3 days. Your account will be automatically charged for renewal, based on the annual subscription plan, within 24 hours before the end of the 3 days free trial period. You can cancel auto-renewal at any time, given that the cancellation is at least 24 hours before the end of the current period. Any unused portion of a free trial period will be forfeited when making a purchase of an auto-renewing subscription. ***Manage your subscription directly from your iPhone*** Subscriptions can be managed by the user and auto-renewal can be turned off by going to the Account Settings: - Open the Settings app. - Tap your name. - Tap Subscriptions. - Tap the subscription that you want to manage. Privacy policy: https://cleanup.photos/privacy Terms of use: https://cleanup.photos/terms