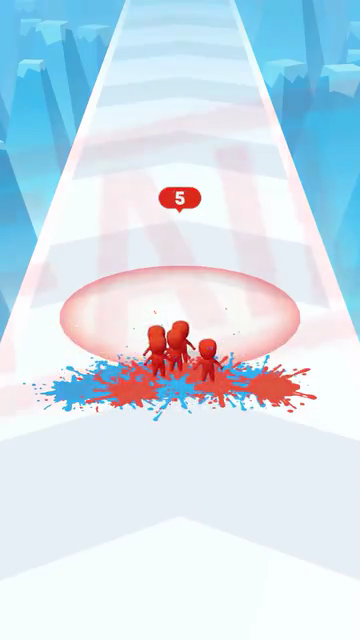 Choose the best gate, pass through it, and bring stickman warriors together to clash with the opposing crowd. Become the crowd master and lead your people through the crowded city till the end of this epic race. Crash obstacles and beat everyone on your way, collect coins and upgrade your levels. Defeat the King-stickman in the final battle and take the castle! Looking for some fun and thrill? Then this 3d running game is just for you. Count Masters is one of the most exciting clash games of all times! You start the battle alone but trust us: there are no chances for you to feel lonely. This city takeover game features fascinating graphics and simple mechanics. You have a chance to get absorbed in the bright world of Count Masters full of gang fights and stickman battles. Get ready to spend hours playing one of the most thrilling running games. We promise: you won’t get bored!

Not like the add.
COOMER420 on 2021-06-17
I saw this game as an add and it looked really cool so I gave it a try. I think something that game creators do is they will purposely play the game really bad for the add and then when I see it I think oh the person playing this game is really bad and I think I could do this game much better than they can and so I download the app and then you lose interest really fast because of how easy it is and so it was a waste of time and effort! That’s probably why games like this always have so many people play it. If I were you I would stick to Roblox, Minecraft and google. Some other games like this are better but it’s a really rare occasion and almost never happens.
Filled with ads
Funplay321 on 2021-06-17
At the end end of every run there is an ad which I can understand cause welcome to mobile games. But every time I watch an ad cause I have no choice but to take upgrades for free when, when I watched an ad the level before and have to now watch another for a free upgrade yet I have the in game coins to do it without an ad so I recommend avoiding it unless you don’t mind being forced to watch an ad every time you wanna do any crowd size upgrades but can so far do as many coin upgrades without ads as you want.
Holy ads
BWLSAQ on 2021-06-17
Game is ok, there are still a few bugs where you want to go throw the left gate but it chooses the right gate. This game has WAY too many ads. Play on airplane mode or you’ll only get to play for 10 seconds then have to sit through a 30 second ad. There’s no option to just buy the game to turn the ads off so that’s a huge negative to me. Game is fun tho, nice way to kill a few minutes while pooping as long as your internet is shut off.
No point!
Rayray1900 on 2021-06-17
I had this game for awhile thinking at some point it would shift to harder levels , different challenges etc. NOPEEE. I went to starting with 15 people and the end result no matter what is always the same. You finish with 50-120 ish people every. Single. Time. Play on airplane mode to avoid the insanely long and frequent ads. Ads are at least 2x longer than actual playing time. TERRIBLE. Deleted !!!!!
Don't download it.
The benefactor! on 2021-06-17
This game is a total waste of time. There is no competition, no hard mode rounds, it&#39;s endless nonsense. It&#39;s practically impossible to lose if u chose the right number. These type of games are like bugs in the app store. Want to waste the time?- download it. But you will REGRET IT! Trash game! I hope this review helps you to not to download this TOTAL TRASH GAME. Thank you.
Too many ads
~TheBigTuna on 2021-06-17
Every run you do there’s an ad it’s not every other run but every single time you play you get an ad, not only that but you claim a reward there’s an ad. Truly unenjoyable I understand people like ad revenue but at least make it worth the time to play and watch an ad or at least make it so the ads are only like 5 seconds not the entirety of the ad.
To Many Ads, And Gets Boring Quickly
MaxWolfHi on 2021-06-17
First of all, Theres to mnay ads everytime i win, a random ad pops up out of nowhere, and I really think that you developers only care about money and not entertaining people. Second of all, the game gets boring pretty easily as it just repeats poorly made stages. Honestly this games not the worst game but I dont really like it.
Unreliable and Ambiguous
Catluvsgolf on 2021-06-17
UNRELIABLE. Too many freeze ups between levels and after watching ads. AMBIGUOUS. It’s mildly amusing watching the soldiers carry each other up the stairs after completing a level, but there I gave no idea how reward points are calculated. Sure they show some numbers, but they’re gone in an instant.
Too many ads, not enough game
Ben-Thomas on 2021-06-17
Too many ads. I understand it’s a free game so some ads are expected. But you spend more times watching ads than playing the game. Plus the game play is way too easy. I have played about 30 levels and there is no challenge. This game whole purpose appears to be that it wants you to watch ads.
Way too many ads
DFLE on 2021-06-17
Gameplay has the potential to be fun, but when each level takes about 20 seconds and they want to give you a 30 second ad, that is a huge problem. Even if you are lucky to get an ad that lets you skip after 5 seconds, that still leaves you watching ads 20%of the time you are playing the game.