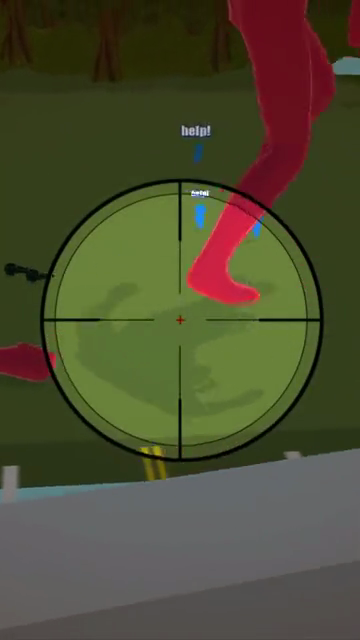 Giant invaders ahead As a hero sniper, take up your weapons and protect your home! 1. The operation of the game is simple: slide aiming, let go shooting, easily shoot and kill the enemy. 2. Simple picture: the simple game picture blows away the summer heat and brings you a fresh feeling. 3. Adjust the shooting angle, master the shooting time, use high-energy sniper rifle to penetrate many obstacles and concentrate on the target.

Fun, but needs work.
: ) ?????? on 2022-01-17
Now, dont at all get me wrong. It is a fun game to play, but there is definitely some things that i hate about this. First thing, sometimes characters will literally walk out of view, being unable to hit them and having to restart the entire app to play it again. Second thing, turning off Wi-Fi to get rid of ads does not work. You need it on to access the game. Last thing, levels will get VERY repetitive. It gets boring quickly, and turns into more of a meme game that an actually interesting one that i would play alot.
Can’t Play Offline/Too Many Ads
KotyKotyKoty on 2022-01-17
I started playing this game because it seemed like a fun sniper game, but the ads… There were ads after every level and sometimes in between. You can only do so many upgrades without having to watch ads for those as well. I cut off my cellular data to play without the ads (as I do for most games on my phone), but it wouldn’t let me play, but 1 level offline.. and it doesn’t save the coins you earn from it. Fun for first few levels, but not worth the download in my opinion.
Only one reason it is 1/5*
Isnand on 2022-01-17
Now I thought it was fun and I understand the need ads to make money to pay for this…but JESUS! Oh you unlocked a bullet? Ad. Oh you finished a level? Ad. Oh you clicked a page? Ad. Home Screen has like 3 ads in general. I do not pay to remove ads that someone forced on people and when there is this many ads being forced to where we cannot enjoy a game it just makes it less entertaining and more annoying.
Commercials
Shoeless1966 on 2022-01-17
They should have named this game, commercials or ads. I timed the game play and the ads. It takes longer to watch the ads than it goes to play the game. Very boring! This game is nowhere close to being good enough to put up with that many ads. I wish I could get my money back. This game is terrible. If somebody gives this game 5 stars they must be paid by or employed by the manufacturer.
Fun Mechanics But To Many Ads
Josh_is_a_jedi on 2022-01-17
It’s the same problem that plagues most games nowadays. The game might be entertaining, but there are SO many ads and the ads are longer than the actual games and missions. It takes 10 seconds or less to beat the stage, but you have to sit through a 30 second ad right after or just to upgrade your abilities. Overall it’s not worth your time unless you are bored out of your mind.
Too many adds
David_305 on 2022-01-17
Fun game however too many dang adds after every single level is completed. Adds even to claim new weapons that sometimes have to be played twice. It’s ridiculous. What’s more ridiculous is that this game cannot be played if your phone is in airplane mode. No network connection = no play with this game. Absolutely ridiculous. Deleting as I write this review.
The Ads Are Insane
Londoooo! on 2022-01-17
I saw another user had bought the “ad-free” version to no avail and I played it anyway. I was hit with so many ads while a giant approached and apparently they keep approaching despite being stuck watching ads. I failed a level literally due to ads. That’s a problem. Other than that, it is a quick and fun game.
JUST NO
ZindziAdragon on 2022-01-17
I noticed that this game has a very big amount of bugs and is not fun at all and I thing it was terrible! It didn’t even let me shoot the gun like what the heck the whole point of the game is to shoot the ball I think that they should fix all the bugs because it really just isn’t right ughh!! I HATE! This game
Game Review
Ron Zavala on 2022-01-17
Overall it is a great Game I could see myself playing this for a very long time. The only thing is there’s too much ads and it doesn’t let you play off-line. I enjoy dollar in these games but when these companies start to get greedy it takes off all the fun and it just feels like you’re being force-fed ads.
Horrible game
chiefindoinks on 2022-01-17
First, the game is way too easy for any enjoyment. Then after you finish each level, you have to sit through a 30 second ad. So a 5 second level for a 30 sec ad. No danger or struggle at all, this game is only a money grab with the “pay to play” and constant ads. Don’t recommend at all.