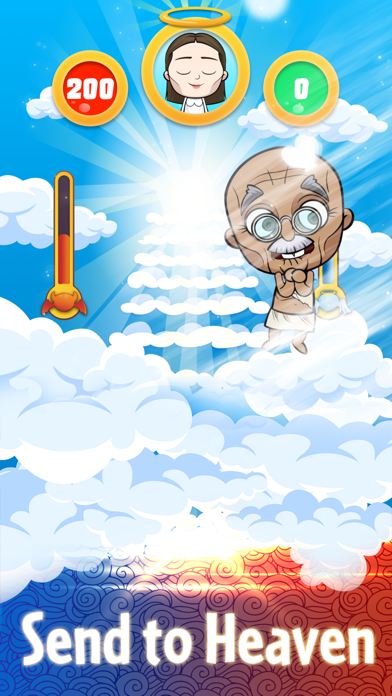 It is Judgment Day and here you are. As the Angel of God, you are in charge of judgment on the reckoning day! All souls in presence with their good works and sins. You will decide who is sinner or innocent. They will confess to you what they have done during their lives. Sometimes you will interrogate them with the lie detector. Here they are: You already know most of them. They are famous people. Characters left their marks in history: commanders, emperors, queens, kings, celebrities, intellectuals, musicians, imposters, scientists, movie and cartoon characters. Some of them are ordinary people with ordinary lives. Doctors, teachers, students, activists, landlords, and so on. You will like attractive graphics with easy and fun gameplay: - Decide whether they go heaven or hell - Scroll right or left to send them to heaven or hell - Interrogate them by using the lie detector - Force them to confess their sins - Collect coins and use them for characters to confess - It is up to you to give them one last chance - Unlock new angel skins - Enjoyable mini-games - Burn one, save one levels - Choose the most evil one test - Special levels with famous characters - Match the souls and bodies Be fair and secure justice. Judging in the afterlife requires being merciful but righteous! Enjoy the game committed to fun!