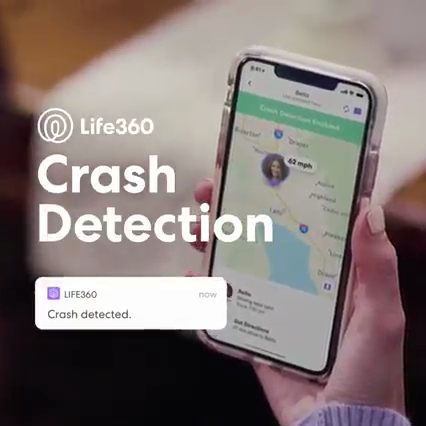 Protect and connect the people who matter most with comprehensive safety features for life at home, on the web, and on the go — all in one place for added value and convenience. Enjoy modern, advanced tools that go beyond a basic GPS phone tracker. Bring your family closer with comprehensive safety features designed for busy, modern life — all in one place for added value and convenience. Go beyond basic GPS phone tracking with smart tools and anytime, anywhere emergency support. Life360 membership offers a wide range of all-new services. Highlights include: - SOS to send a silent alert with your location to family members, emergency contacts, and responders. - 24/7 Emergency dispatch that’s always on call for your entire family. Even if you can’t call for help, we will. - Family Safety Assist for comprehensive real-time specialist support anytime, anywhere, and in any situation. - Identity Theft Protection to safeguard each family member’s sensitive digital information and white glove restoration service, including up to $1M in coverage. Explore Life360 for free Download Life360 and get started with advanced Location Sharing, 2 days of Location History, and 2 Place Alerts to see family members come and go from your top places like home, school, and work. Protect your drivers and passengers and respond to a car crash faster with automatic Crash Detection, and stay safe on the go with automated SOS. Upgrade to membership for premium features and tools, backed by 24/7 specialist support and emergency dispatch. Find the plan that fits your family’s unique needs and try free for 7 days. Life360 Platinum Be prepared for anything, anywhere with all the features of Life360 Gold, plus: - Family Safety Assist: Disaster Response, Medical Assistance including a nurse helpline during the pandemic, and Travel Support with a team of trained, live agents - 24/7 Roadside Assistance, including 50 miles of free towing - $500 in Stolen Phone Coverage - ID Theft Protection & restoration with up to $1M in coverage per person - Credit Monitoring Life360 Gold Protect your family on the go with all the features of Life360 Silver, plus: - A full 30 days of Location History - Unlimited Place Alerts - Individual Driver Reports to see how (and what) your drivers are doing behind the wheel - Crash Detection with emergency dispatch and live agent support - 24/7 Roadside Assistance - $250 in Stolen Phone Coverage - SOS to send a silent help alert, plus 24/7 emergency dispatch to your location - ID Theft Protection & restoration with up to $25k in coverage per person Life360 Silver Make daily coordination a breeze with features like: - 5 Place Alerts to stay in step - 7 days of Location History - $100 in Stolen Phone Coverage - Crime Reports to see and avoid dangerous situations - Family Driving Summary https://www.life360.com/privacy_policy/ https://www.life360.com/terms_of_use/ Disclaimer: Continued usage of location services while the app is in the background can excessively drain battery. But not to worry, we’ve spent 10 years developing our location technology and our algorithms always keep battery usage to a minimum, even while you drive!