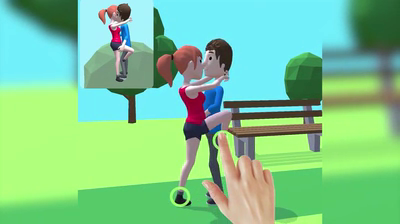 Put her and him in shape. Control puppets in variety of situations and help them achieve the desired state!

PLEASE READ
hhggdvssweeeeeeee on 2021-09-21
This game is sooooo inappropriate it said 9+ so I was sure why not? because I’m 9. NOW I KNOW WHY this game was fine but then it was SOOOOO not for kids. It made them do STUFF THAT WAS SOOOO WIERD!!!!!!! If ur a teenager and ur inappropriate THEN U WILL LOVE THIS GAME. But it should be 18+ INSTEAD OF MAKEING IT FOR KIDS ! Next The commercialsI SAW A GAME CALLED KISS IN PUBLIC ON THIS APP I SAW A GIRL AND A GIRL KISSING! I’m 9 and they have scarred me…😭 and this game is so gross 🤮 remember when I told you about the commercial! I MEAN A GIRL KISSING A GIRL?!? well if u dont listen to me UR LISS PLAYING THIS GAME NOT MINE!help me… ps.people who made this game are NOT SANE
This game is not what it seems.
Kitsumemes on 2021-09-21
It has no sounds or music which just doesn’t mate it lively in any way it isn’t exactly like the ads plus the ads they give in here are a lot and it kinda just makes you wanna not play it ya know? And some levels like a phone one are lazily made so trash in general but if you wanna download it us you got baited by the ads do I you’ll prob end up deleting it not even 30 mins after downloading it.
Okay
PurpleSmear on 2021-09-21
Well first of all there’s the 9+ age recommendation. The beginning makes sense but eventually the content seems to be inappropriate for children 9+. Secondly, there’s the fact that once you finish all the levels you have to replay them again, so some new levels would be great. Lastly, it is an overall good game, and I do recommend it if the above problems would not affect you.
Em’me
oh yeah let's go come on girl on 2021-09-21
They’re just a really good game and they make a lot of movements in the game for you to just make a lot of levels we just love your game it’s amazing thank you so much for making a game and we love you guys ever made the game it’s such a new game and we all love it it’s just a really lot of humans that we love and then we can learn them thank you thank you so much
Not for children
Erika hart on 2021-09-21
This game is very inappropriate which by itself is fine. However the ad for this game played in a game my 4 year old son was playing. The game he was playing was definitely designed for children. The age rating for this game now is 12+ which is too young but yesterday it had an age rating of 9+. That’s ridiculous.
Deserves no stars
smoopie6 on 2021-09-21
These apps don’t even try anymore and this is inappropriate and for no reason I’m offended. Honestly had more fun while watching ads then playing. Only downloaded because I couldn’t believe this was a thing… can confirm it is ligit. Ligit stupid. Get some brain cells and play chess bruh
Annoying but a little fun
belsap👨‍👩‍👧‍👧 on 2021-09-21
My game is lagging because of ads. (Probably my old iPad tho) And there is too many ads! I have been only playing for a little and there are soo many! I have to restart the app every time I beat a level! I would give this 5 stars if there were less ads. And this is the end of my review.
Obviously pretty legitimately boring
fnf fan9812 on 2021-09-21
When you first download this game you feel like it’s fun and enjoying and super addicting but after a while you get bored of the game immediately and start deleting it obviously that’s pretty much what is going on here you get bored after a while spending your time with playing it
THIS GAME IS NOT FOR NINE YEAR OLDS!
10011011100011 on 2021-09-21
The rating of this game is severely INCORRECT! Whoever rated this for NINE YEAR OLDS needs to change it. If you don’t know what I mean than let me explain. In this game their are special levels that depict POLE DANCING AND UNDER DRESSED WOMAN! PLESE REMOVE IT OR UP THE RATING!
Ummm could be better
kawaii-kittensss on 2021-09-21
Ok then is is rated 9+ but I think It needs to be 10+ because there are some... Strange things, anyways SO MANY ADDS when it offers you something to watch an add and you decline, but they give you an add anyways It is enjoyable though and quite addictive I you ask me.