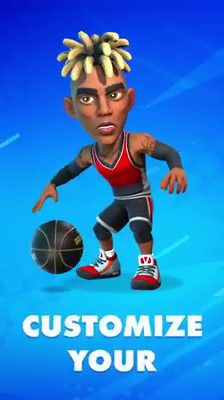 The Ultimate Basketball Game Put on your sneakers, and get ready to go onto the court in this brand new basketball game! Experience basketball like never before, in this fresh and easy to play basketball game. In Mini Basketball you will enjoy a casual gameplay experience, while still remaining loyal to the original game. It’s time for you to get the crowds roaring in the arenas, score some amazing 3 pointers, and build the strongest team that ever existed! Pick up and Play Welcome to the first casual experience of basketball. Mini Basketball has a casual pick up and play feel that still remains true to the original sport. No need to waste time on endless mechanics, just pick it up and jump straight into the action Build, Upgrade and Customize Your Team In Mini Basketball you will be able to win players, from common to epic ones, and upgrade them to turn your team into the most feared opponents on any pitch. Not only can you build your team, but you will also be able to fully customize it to your image with more than 100 customizable options from: Unique logos, jerseys, shorts, sneakers. Personalize your gameplay experience by choosing the ball you prefer, mascots, cheerleaders and dunks! Name your team Win the rarest pieces of equipment and show them off! Play through Different Tiers and Tournaments Unique and original arenas and courts that will get bigger, louder, and more impressive as you progress through your basketball career. Several tournaments where you will go through playoff stages and win a trophy at the end of the road! Whether it’s on your court, or in an international setting, every game will feel different. New and more impressive arenas are on their way, so keep an eye out for future updates. Rule the World Climb up the leaderboards to win amazing prizes and always be on top of the competition. Every week you will have a chance to move up the leagues, from the Brass League to the All-Stars League, so make sure that you grab those promotion spots by the end of the week to win bigger and better prizes! -------------------------------------- Contact us: [email protected]