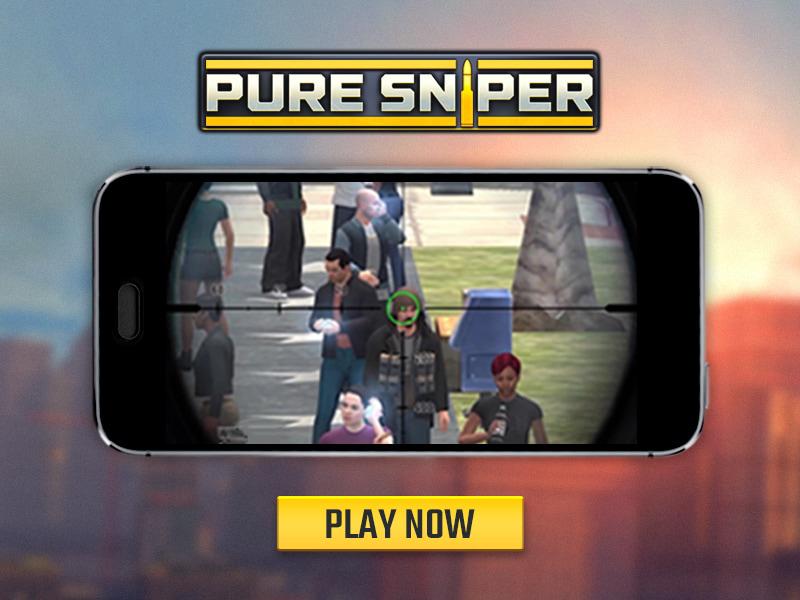 Pure sniper is an exciting and realistic sniper shooting game with a massive campaign mode that can be played offline and a realtime multiplayer PvP combat mode. Arm yourself with various powerful sniper rifles, machine guns, shotguns, and pistols to complete modern combat missions deep inside enemy territory. Why Pure Sniper is Epic? Sniper Main Campaign: In this mode, you will be able to eliminate targets in many cities around the world. Complete these sniping missions and explore new virtual reality space with interactive sights! Gun Range Competition: Take this challenge if you have gun shooting skills to kill your target from any range. Hostage Rescues: Missions where you will use your sniper skills to help helpless hostages escape dangerous criminals. Help The Police in A Gun Fight: In this mode, you will be able to assist the police in a firefight to take out gun carrying criminals. Take out Manhunt Targets: You will be shooting a wanted target, sometimes it can be an armed criminal, sometimes it can be a thief, or maybe a dangerous criminal. Helicopter Assault: In this mode, you will be using your epic sniper skills to shoot & stop criminals while riding a helicopter. Pure Sniper Game Features: - This FPS Gun Simulator game has a thrilling 3D design and sound. The graphics are breathtaking, with slow-motion shots that will leave your heart racing! - Many fun & exciting sniping guns, pistols, bullets, and grenades. - The battle simulator game is totally free to play. Available in offline solo and online multiplayer modes. You can join the battle and start playing the free game even when you are offline - Play in multiple battlegrounds - Simple & smooth gun shooting control - Interactive & action-packed environment - Connect with the FPS snipers around the world to beat other teams. Step into the ultimate 3D FPS action adventure! One of many games in the free sniper shooting games genre, which offers an immersive, competitive experience for endless hours with your friends. VIP Club Subscription Now you can subscribe to the VIP Club for access to exclusive benefits. Subscriptions are $6.99 USD weekly* Payment will be charged to iTunes Account at confirmation of purchase. You will be able to use VIP Club benefits for the duration of the subscription. Subscription automatically renews for the same price and duration period as the original "one week" package unless auto-renew is turned off at least 24-hours before the end of the current period. Account will be charged for renewal within 24-hours prior to the end of the current period at the cost of the weekly package. Subscriptions may be managed by the user and auto-renewal may be turned off by going to the user's iTunes Account Settings after purchase. No cancellation of the current subscription is allowed during active subscription period. You may cancel a subscription during its free trial period via the subscription setting through your iTunes account. This must be done 24 hours before the end of the subscription period to avoid being charged. Please visit http://support.apple.com/kb/ht4098 for more information. You may turn off the auto-renewal of your subscription via your iTunes Account Settings. However, you are not able to cancel the current subscription during its active period. Any unused portion of a free-trial period, will be forfeited when the user purchases a VIP Club subscription. Links to our Terms of Service and Privacy Policy can be found below: https://www.miniclip.com/games/page/en/terms-and-conditions/#privacy-settings https://www.miniclip.com/games/page/en/privacy-policy/#privacy-settings * Prices are equal to the value that "Apple's App Store Pricing Matrix" determines as the equivalent of the subscription price in $ USD

The devs are cheats!!!!
JEmlay on 2022-09-29
Each area is rated Z1, Z2…that’s the gun level you should use. When I got to Z2 I had enough money to buy a Z3 gun. Cool! WRONG! The game rubber bands itself and it made The Z2 area as hard as a Z3 area. Even worse the money in the Z2 area didn’t support Z3 upgrades but it forced me to upgrade anyway. Flash forward I get to The Z3 area with a Z3 gun. Because it was fully upgraded because the Z2 area forced me to I was able to blow through the Z3 area in 2 minutes. Now I’m in Z4. Rubber banding is the biggest, laziest cheat a dev could ever implement! EDIT: Check out that cut and paste reply from the dev. I didn’t even say anything about spending real money. Also, this game is now complete trash! There’s a level where the wind changes every 2 seconds. Yes, every TWO SECONDS! Sometimes less than 2! Blowing left, now right, 50 then 10. The split second before you hit fire, the wind changes. Every shot is a miss.
At first I thought this is fun
xzecute on 2022-09-29
At first I thought this is fun, then said ok let me reward the devs by buying a weapon with a nice skin, which I like to do when I think game devs have done above average… only to find out it cost 15k upwards of in game currency for even the tiniest single upgrade of this weapon. Whereas many base upgrades cost $400 in game currency or something. So I have to revert to the base model weapon, and grinding for energy scraps and usable weapons as my reward for paying for their game. Meaning that becoming a paying customer prevents you from using what you’ve paid for. This is hands down the stupidest progression model I have ever seen in my life lol.
Fun but PvP is Unfair
jez007007 on 2022-09-29
Entertaining game and needs more locations to stay fun. Enjoy the levels of missions. There are clans which makes the game entertaining but there are clans that must be pay only. I saw PvP is level based but this is not true. I am a level 18 currently and have a level 4 gun that does about 1100 damage. Last PvP I see every person I played against had a gun that was at a minimum 2000. They do not place you against people of your own stats/level. It is the same clans that absolutely dominate PvP. I look at the guns and it is Vip (pay) only. It is no fun playing in the same room as these people. The game will die with pay people dominating.
Needs work
2002 Jeep Sport Wrangler on 2022-09-29
I have contacted them twice about the match ups with other players . They told me twice that if there are not enough players with or close to my ability they just put you in a match . I find they VERY hard to believe that almost all of the matches I play that there are none close to me . I think it comes right down to them making money on the upgrades so you can keep up with the other players . It would be a great game if the matches were indeed close to equal in players strengths . In the games I play the players are anywheres from 3 to 6 times more powerful . Go figure .
Pay to play
MaxTCArmy on 2022-09-29
There are many points where it tries to get you to pay but it is quick and easy to get past those. But there is a point where, after only a short time, you have to pay to proceed. I would give the game overall around 3.5 as far as the game itself. But the fact that you can only play a short time without paying drops it to a 1. Why hide that fact? Why not just say up front that it is free for a short time then you will need to pay?
No more zones
notwildaboutit on 2022-09-29
I like playing this app.. only problem is I’ve reached z12 downtown. Says working on making next zone. That’s been several weeks now. Do I continue to wait or just delete and move on and try to find a different sniper app and hopefully like it as well. Thanks
Meh
Youpickanickname! on 2022-09-29
Fun but PvP often doesn’t count kills and being low level against those Level 15+ decked out with VIP gear is ridiculous. I’d group the VIP’s together to make it more fun for everyone playing. I’d also spend more on it if it was better priced.
Nice
phantom0428 on 2022-09-29
Very creative people who made this game are extremely smart and intelligent and I salute all men and woman who created this very fine detail game and I also hope all of you have a safe and wonderful life to you and all your love ones as well
Boooooooooring
el hefay on 2022-09-29
Stop making apps that leave the player WITH NO OPTION but to perform task a and then task b, and then task c. Zero options for upgrading, maps etc. It’s like game developers these days ONLY make the cheapest, crappiest possible games.
Disappointing
itswise on 2022-09-29
It’s too bad. This is a great game but not worth waiting 10 minutes between plays for the upgrades. This game is designed to bait you into spending money. Way to much money for a tablet game.