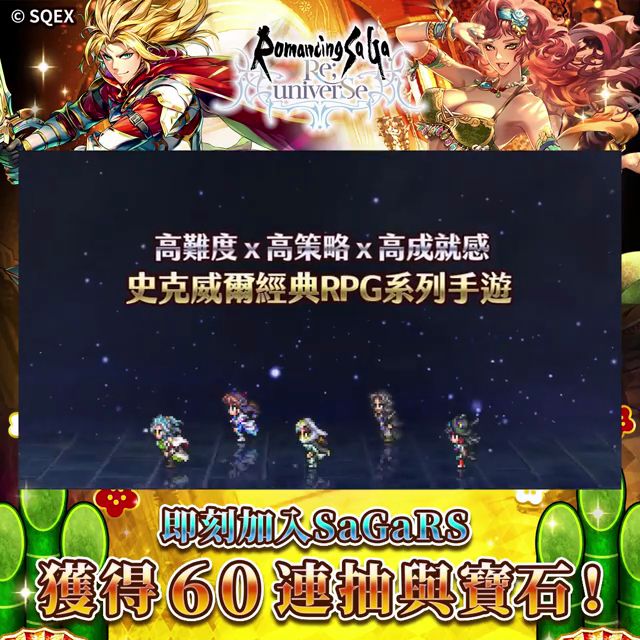 [Brought to you by SQUARE ENIX and Akatsuki with over 25 million downloads worldwide!] Romancing SaGa Re;univerSe (now known as SaGaRS) celebrated its 2nd anniversary! SaGaRS is a mobile title for the beloved SaGa series, a classic Japanese RPG series that shines alongside FINAL FANTASY and DRAGON QUEST! It is also one of the friendliest and most captivating free-to-play mobile titles currently available! ◆ A looming apocalypse The world is trapped in a cycle of destruction – the Rise of Morastrum every 300 years brings ruin and extinguishes life. The Sinistrals and their legions gather – will you stand against them? Experience an epic story with a cast of colorful and extraordinary characters as you assemble a party of heroes! ◆ Free-to-play, NOT pay-to-win! You’ll need to use strategy, wits, and planning to win – but, thanks to a deep character growth system and many ways to earn loot, you won’t be forced to pay to progress! ◆ Amazing illustrations and pixel art See story and combat come to life in stunning, meticulously crafted pixel art! Lay your eyes on lavish character art from series illustrator Tomomi Kobayashi and a bevy of guest artists! ◆ Strategic gameplay and casual fun Invest as much time and strategy as you want! The game’s combat system allows for auto-play when you want to casually play, and manual play when you want to go all in. The more you put in the game, the greater the rewards! ◆ Character customization and growth Obtain multiple roles for your characters, customize their skills, and assemble your own unique team of heroes! ◆ An epic soundtrack World-renowned composer Kenji Ito brings you a moving soundtrack filled with epic melodies and driving rhythms straight out of the golden age of classic RPGs! ■ iOS OS：iOS 10.0～