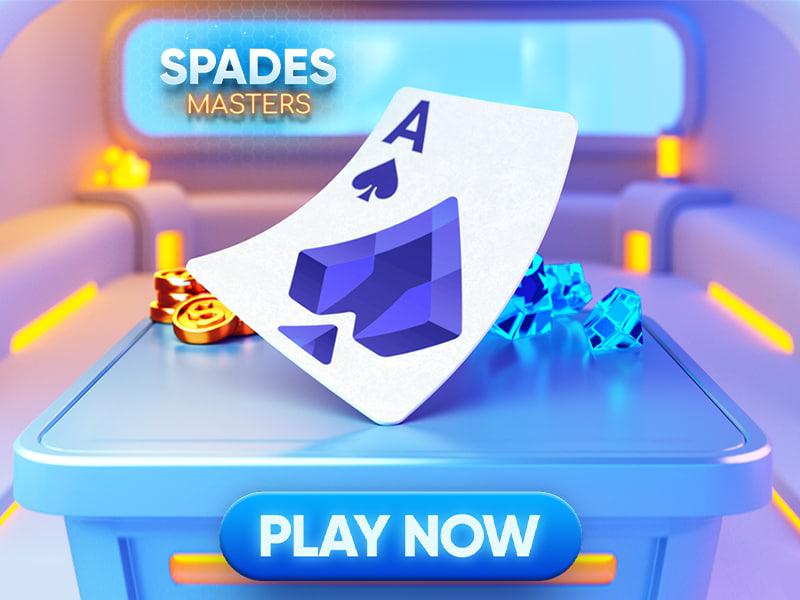 SPADES is a popular trick-taking card game similar to Hearts, Bridge, Euchre, Gin Rummy and Tarneeb; however, the spades is always the trump suite PLUS the Ace of Spades is the strongest card. Spades Masters brings you the latest in graphics technology and ironed out mechanics to ensure you enjoy a well balanced and streamlined gaming experience right at your fingertips. . You can play in Solo or Team (Partners) modes each with special events and daily benefits to maximize your winnings. Play now and prove that you can become a true SPADES MASTER. ====== Features ====== FREE TO PLAY - Free to play for everyone. FREE DAILY REWARDS Collect your free rewards and coins to play in higher rooms and win more. COMPETE IN DIFFERENT GAME ROOMS Refine your Spades skills in rooms of various skill level or join Daily Events for massive awards. TRACK YOUR PROGRESS Compare your statistics with other players, earn badges to become a Spades Master or a Spades Royale player. LEVEL UP Spades Masters well balanced economy system will always give you a challenge and a fair playing field for everyone. GUEST MODE Some people prefer to stay ninja's. We get it. Come right in and stay anonymous. SOCIAL MODE Bring your friends into the game to grow your Spades Ambassador profile and get more bonus. CHAT, EMOTICONS, COOL MOVES , PROFILES and MORE! Spades Masters has all the features for a social Spades game experience. Check out the game and let us know your feedback!

Skill based issues
Rice and chopsticks on 2022-10-06
I could really like this game but I hate how you guys always match me with the worst partner when it’s for the big gamble. You can’t say it isn’t fixed because when I play for minimum loot I become spade tight and can bid 6-8 books, but when I play for higher amount values I get stuck with the most mediocre player and delt the worst hand possible. I ain’t one to complain, but the amount of times I was on a streak just to be put back to the bottom because of horrible skill base pairing is quite annoying!
AngryPlayer
DevilDamned on 2022-10-06
I’m so sick of the rigged dealing, where the opposing team gets the Spades and the high cards. You can’t even bid Nil and win. But they want you to spend your money buying their gems and booster drinks. They want you to play in the rooms where it cost more to play. I’m tired of the demon dealer and algorithms. Yes, the site has nice features, but it’s ridiculous that they want more money. The company is based in Switzerland and is worth hundreds of millions dollars. Don’t be a sucker for their scam.
Fake people
jdtbxsyj on 2022-10-06
I think it’s hilarious to see all these fake models pictures with their sunglasses and hands up to their face posing. I saw the same dude’s picture with two different names in the same game I was playing. What a joke to hide the bots playing this way. You think you’re playing real people. Oh don’t take me wrong, I’m sure a low percentage are human. What a joke that you think we’re that stupid. The game would be more fun with real people playing. Only one star from me.
Pay to win
mikee4406!!..&2 on 2022-10-06
For the past two days I got nothing but garbage hands and four out of the last nine hands my opponents were felt 10 hands . So I looked up the probility of that happening and it is .34% chance of that happening so save that bull about getting cards randomly . Too bad people can’t just put out a good game anymore without trying to screw people for every last cent
Another bad AI
Avondtein on 2022-10-06
In multiple games the computer led early in the hand with a king where they could only know the partner had the ace. why is it so hard to program AI for a spades game? also clearly you are not playing with real players. my partner covered their nil but no effort to cover their own partner. Deleting this trash.
Cheated
xzkjhfgdsa on 2022-10-06
I was enjoying until I realize I would make a book and they would give it to another player. And also I lead with a spade player play a diamond on the spade. Then turn around and play a spade. Seems to have some technical issues.
Nonsense
The Real Meta on 2022-10-06
Another garbage money grab iPhone game. Starts out cool but bots take over eventually and the frustration isn’t worth it.
Janice b
[email protected] yahoo.com on 2022-10-06
There are partners that deliberately bid rediculously high or when you go nil they go nil..this has to be addressed
Changes
lady derf on 2022-10-06
I like how we use to be able to request partners I hate it doesn’t it’s ya he’s the fun out of it
Spades
Cashmere Kae on 2022-10-06
Great game wonderful prizes