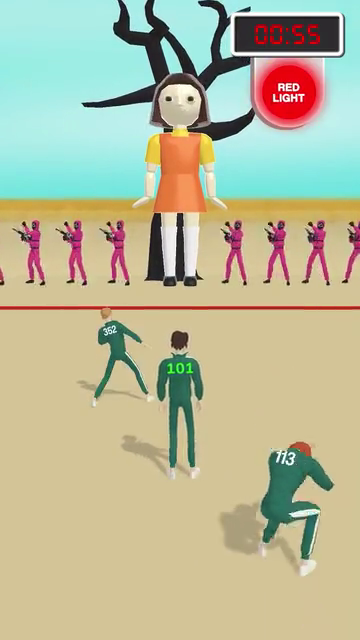 Join the Survival Challenge! You will play many different games! Don't worry, if you pay attention you might be the ultimate survivor! There are levels which bring childhood games back to you! Overcome the Dalgona Candy Challenge! Be careful or FAIL!

Decent if dishonest
Zarikar on 2021-10-23
Advertisements show it looking extremely similar to the show, but in reality, it’s about as copyright safe as can be. Generic soldiers instead of the Squid Game soldiers in the ad, stupid looking baby instead of the copy of the motion sender from the show shown in the ad, etc. etc. overall okay experience, games are easy at least up until Marble level (haven’t finished the show so didn’t keep playing because spoilers.) Don’t expect a faithful “licensed game” experience, because it’s pretty clear the developers don’t have the rights to make a “Squid Game” game and the advertisements should honestly be considered illegal and reported based on what I’ve played so far.
MORE WORK!!!
shayyy16 on 2021-10-23
Game 1: Needs original guards and doll , needs to be more challenging with sound and more distance. Game 2: Where are the other two honeycomb shapes/needs to be more challenging also. Game 3: Tug of war is so easy but ian got no complaint just needs sound. Game 4: Can yall make it to where we can choose even or odd please And the 5th game is ok i guess but also add the 6th game...then this will be a good app❕❕
Meh
Rosen212 on 2021-10-23
I’m giving this game a 2 star rating. I kept playing it and repeating it like it dies hoping there would be new levels, but there aren’t any. The graphics improved but nothing else did. I’m uninstalling this game because of the fact I can’t even play it because it just freezes on the loading screen. I haven’t been able to play the game the last couple days. So yea.
Review
Briceyda :) on 2021-10-23
It&#39;s a pretty cool game, it&#39;s very much like the actual series but there&#39;s no sound what so ever and there are too many ads. The ads are super annoying especially since there&#39;s one after everything, whether u lose the level or complete it and it&#39;s just frustrating. But over all it&#39;s an okay game.
Repetitive and boring
Stickyrice_balls on 2021-10-23
You have a few of the games from the show. It basically repeats itself. You play the same games over and over again. Doesn’t get harder to play. Tons of advertisements for other games. That’s really why they made this game. 2 stars cus it reminds you of the show. But deleted the app cus it’s lame and boring.
Thank you for making this his game
arialyunna on 2021-10-23
Making this game was a good idea it’s just alike the games of squid game you didn’t mess up any parts on this game is really good and realistic everybody plays it in my school even my mom gave it a try even when she don’t like games, but anyways thank you for making this game .
I cant finish the Honeycomb game.
Emma greenblack on 2021-10-23
Reason: it’s too hard for me because I keep losing. But I can do it. My really bad edgy thing can be smart and weird. But what can I do? I can only get on the green part but not the red part. And this is the best game. Thank you for making this game - Anna nicki.
Trying to ride the hype of squid games for downloads
wywysh on 2021-10-23
Challenges take 10 seconds at max to complete and then there is a 30 second ad before the next challenge starts. You can play in airplane mode to avoid ads but even then you beat all the challenges in a minute and then you repeat all the challenges again. Not fun.
Ads
PASTERPASTE on 2021-10-23
Could have been a great game if there were no ads after every single gameplay, I understand you need money, but cmon not ever single game round. The marble part was so difficult to do, didn’t even understand it. Worst version of squid game by far.
Terrible
SupaMayneDo on 2021-10-23
Worst game I’ve ever downloaded. Took less than 5 minutes to complete the whole thing.. And starts right over from the beginning. Not to mention it’s quite literally the easiest game I’ve ever played. Not worth the download