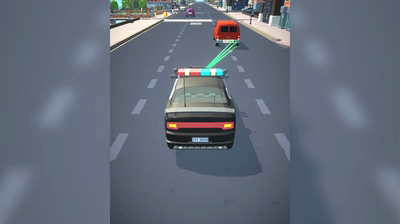 In the seedy underworld of the city, one cop stands alone against the dangers of the traffic ahead. Keeping crime at bay, this officer is the only hero the city has to protect it. Patrol the streets at night, keeping a close eye on the cars around you. Think you found a criminal? Then it’s time to scan their licence plate and test your instincts. Don’t let the crooks get away and escape to the highway, chase them down and pull them over before it’s too late. Justice is waiting, in Traffic Cop 3D Traffic Cop 3D features: -Pursuit drivers -Cruise through the streets -Be the best cop in town! Subscribe to Traffic Cop 3D for all of the following benefits: * Helicopter Minigame * Police Dog Companion * No Ads * x2 Earnings SUBSCRIPTIONS INFORMATION: Traffic Cop 3D VIP Membership access offers two membership options: 1) A weekly subscription costing $5.49 per week after a 3 day FREE trial period. 2) A monthly subscription costing $14.49 per month. After buying this subscription, you will unlock; x2 earnings for your in-game currency, obtain an exclusive police dog companion to join you, and an exclusive helicopter police chase mini game to play, and receive no ads, which removes non-optional ads from the game. This is an auto-renewable subscription. The payment is charged to your account after confirmation. The subscription is renewed unless you unsubscribe 24 hours before the period ends. Your account will also be charged for renewal The prices notes are for United States customers. Pricing in other countries may change and actual charges may be converted to local currency. End of trial and subscription renewal: - The payment is charged to your iTunes account after a confirmation of purchase - The subscription is renewed unless you unsubscribe 24 hours before the end of the current period - The account will be charged for renewal 24 hours before the end of the current period at the standard cost of the weekly subscription - The user may manage the subscription and auto-renewal by accessing the user's account settings after purchase in the store - No cancellation of the current subscription is permitted during the active subscription period - Any unused portion of the free trial period will be forfeited when the subscription is purchased Cancelling a trial or subscription: - In order to cancel a subscription during the free trial period you need to cancel it through your account in the Store. This must be done at least 24 hours before the end of the free trial period to avoid being charged. http://privacy.servers.kwalee.com/privacy/TrafficCopEULA.html