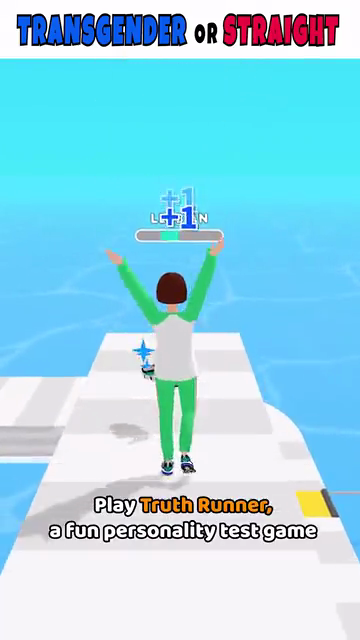 Your choices will reveal unexpected truth about you! 【Girly Girl or Tomboy】 Girls come in all different types. Some are girly girls, some are complete tomboys, and some are inbetween types. But what kind of woman are you? Are you a tomboy? Are you a girly girl? Find your true self in this game! 【Mental Age】 Sometimes the way you think "feels" way younger or older than you actually are. That's called mental age. Do you wanna know yours? Lucky for you, this game has put together a fun and simple test that will help you determine whether you're a kid at heart, a wise soul, or at the perfect mental stage for your age. Just make your choices now! 【Rich or Poor】 Find out if you'll be rich! They say money can't buy you happiness, but most of us still wouldn't mind having to worry less about that next bill. So let's find out if you’re gonna have more than enough or barely enough to get by! ... and many more personality tests for you to try! Come and play now!

This should not be a game for kids
Taz101201 on 2021-10-21
First of all I’m 21, and the choices it has you pick from makes no sense. The one was asking “how lucky are you” then if has you pick two different numbers which honestly could mean anything, and then it has two different birds to pick from, like what does that have to do with being lucky? It makes no sense and I feel like it’s just making ids think you have to be one way or another when that’s not the case in life you can be many things. One of the first games I had said “are you a geeky girl or lovely girl” but the way they made it seem whenever you picked anything “geeky” made it like that’s a bad thing and it’s giving the wrong message. This company makes so many games like this and it’s not right
This game is fun but
kittey girl 15 on 2021-10-21
This game is pretty fun you choose the correct answer and find out wut u are overall I like it really but one day I was playing and then...it showed meh dis level were ya had to decide if u very sexy so you would need inappropriate clothes and makeup like really dark lipstick so becuse of that please change age to 13+ also I DO NOT WANT THIS TO BE ONE OF THOSE REVIEWS THAT GETS A BOT ANSWER NUH UH AND I DONT WANT NO ANSWER THIS IS SERIOUS YALL TEACHING YOUNG PEOPLE THAT BEING NAKED IS OK AND YA SAYING ITS HOW PEOPLE WILL THINK YOUR COOL WEE NUDITY IS GROSS AND WRONG I AM GIVEING YOU A YEAR AND IF U DONT FILL DIS REQUEST I WILL TRY TO GET YA SUED have a nice day 😘
It’s OK
yes146 on 2021-10-21
Over all this is a fun game some parts are inappropriate why is the rating for years old but overall this is a really fun game and I requested to be downloaded I have this app but it’s OK but I usually play it to let out my feelings and I’m kind of on the cool side I don’t know what to say about this but there’s one thing that I don’t don’t don’t like about opinions they kind of like don’t like the report and I don’t like the apps track you especially this app but overall this is a really fun game I highly highly recommend it for some people but it’s your fault if you want to get this app you can get it that’s all I have to say folks bye peace✌🏿
Fun but offensive.
FluffyLucyCat on 2021-10-21
ok. this game is fun but the levels repeat and there’s cuss words, homophobic levels, fat shaming and crap like “You will be poor” also, the level that said “In a relationship, you would be ___”, I ran through all the good choices and it told me I was stupid. Otherwise, this is pretty fun but PLEASEEEE stop all the rude levels! PLEASE PLEASE PLEASEEEEEEEEEEEEE fix the grammar/spelling. one level said “you mentally child” it should be “you are mentally a child” etc
Good, but…
Charlòtte on 2021-10-21
This game is an OK amount of fun, but I personally think that there could be less ads and the quality could be a little better. The characters could also be a little better. The game age limit should be at least 9+. There are some inappropriate characters in the game, and the limit is 4+, the little kids that could be playing this game could get in some REALLY big trouble for this. Maybe don’t make them so inappropriate? Thank you.
Don’t download this
Glo🤬😡🥵 on 2021-10-21
Well I know it says 4+ but it just shouldn’t be for kids! You just pick some random things and this is what your dates will be like and it’s really creepy and weird. It could make kids very sad because sometimes it says you won’t have any friends… so yeah I wouldn’t download it for kids. It might also say that you’re gonna be poor. And I don’t think this should be for kids.
Okay.. but
kattissde plays on 2021-10-21
Okay, number one. TOO MANY ADS. Number 2. Just because I’d rather wear lipstick doesn’t mean I’d wear a skirt. Just because I’d rather have long lashes than glasses doesn’t mean I’m an extrovert. Yeah, I like playing with makeup but I don’t like to spend my money on clothes or I like to party. It just means I get bored because of the virus.
PRIVACY POLICY IS WEIRD
persson who hates this app on 2021-10-21
There’s just way too many adds &amp; it’s glitchy. Every round is the exact same just with different themes so it gets boring. And the Privacy Policy says they can sell ur info to third party sellers and they can view what tabs you open on google/safari and they also collect ur info for targeted adds. DON’T GET THIS APP
I think it’s a great game
🔥_Aaliyah_🔥 on 2021-10-21
I really like the game but to many ads and I am writing this on my first day of downloading and during an ad it pick different things for me that I didnt even want to pick probably and ended up with “sexy” which I was really mad about but otherwise everything else in the game is great!
Appreciate )*
Niangie the nice kitty cat ❤️ on 2021-10-21
Some people hate your game and that’s not nice to do but I love it Lauren the YouTuber she played it and I was like OMG I have to buy it my mom bought it today yay 😁 Stay home if you are sick 😷 I hope you are alright and do not have the Corona! Bye bye: Love niangie!