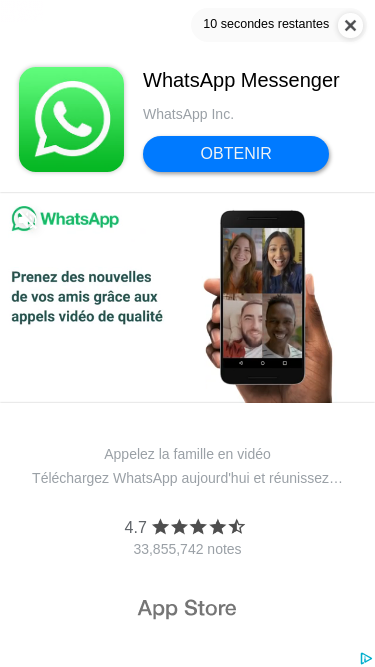 WhatsApp from Facebook is a FREE messaging and video calling app. It’s used by over 2B people in more than 180 countries. It’s simple, reliable, and private, so you can easily keep in touch with your friends and family. WhatsApp works across mobile and desktop even on slow connections, with no subscription fees*. Private messaging across the world Your personal messages and calls to friends and family are end-to-end encrypted. No one outside of your chats, not even WhatsApp, can read or listen to them. Simple and secure connections, right away All you need is your phone number, no user names or logins. You can quickly view your contacts who are on WhatsApp and start messaging. High quality voice and video calls Make secure video and voice calls with up to 8 people for free*. Your calls work across mobile devices using your phone’s Internet service, even on slow connections. Group chats to keep you in contact Stay in touch with your friends and family. End-to-end encrypted group chats let you share messages, photos, videos and documents across mobile and desktop. Stay connected in real time Share your location with only those in your individual or group chat, and stop sharing at any time. Or record a voice message to connect quickly. Share daily moments through Status Status allows you to share text, photos, video and GIF updates that disappear after 24 hours. You can choose to share status posts with all your contacts or just selected ones. *Data charges may apply. Contact your provider for details. --------------------------------------------------------- If you have any feedback or questions, please go to WhatsApp > Settings > Help > Contact Us

account hacked
heliprom on 2022-06-29
accounts are been hacked ,codes will be requested without user request , once they hack the account they put a pin on it and you have no more access , they tell you to wait 7 days to reset , but those 7 days never come since someone is using your number , people are using this app to scam by telling your contacts to make a deposit as a favor . WhatsApp doesn’t have a line to call , no one to help emails are auto mated , once they response they tell you this can happen ,to follow steps which don't work at the end whats app don't provide any help or solutions , phone service providers can’t help you either since its the app programming that got hacked .
Me hackearon mi cuenta de WhatsApp
la hackeada! on 2022-06-29
No puedo creer que sea la aplicación que todos utilizamos para comunicarnos y sea tan vulnerable!! Tengo más de una semana con mi cuenta robada, la persona que lo hizo además de robarla hizo la verificación de 2 pasos y mas nunca pude ingresar a MI CUENTA!! Estas personas que robaron mi cuenta han pedido dinero en mi nombre a mis clientes y no me dan una solución para poder recuperar mi cuenta de nuevo!! Simplemente me envían correos automáticos repetidos que no me dicen NADA! No me dan una solución concreta! Por favor necesito recuperar mi cuenta! Por lo menos llamen a la personas para sentirse atendidos realmente por ustedes
Tons of lost messages over the years...
Liliana on 2022-06-29
I installed whatsapp for the first time in 2016, since then, I've lost tens of thousands of messages, data, videos, etc. In two occasions my new iPhones froze when retreaving my old messages... A 12 gb backup lost (the first time) an 8gb backup, etc... Now I'm plagued with constant "couldn't backup your data" messages. There's no cloud, nothing is kept in their servers even though it's parent company owns the world and has the most powerful servers in the world. Now I rarely use whatsapp, I'm using the "next best" app that had a huge advantage over this one, better stickers and cloud storage. Goodbye whatsapp 👋
Reach Out & Touch Somebody!!
RiteOne2016 on 2022-06-29
Best thing since (PHONE CARDS!!!!!!!! Lol). Love is never to far with this great blessing of an app! I’ve been able to travel the world and back, all in the comfort of home. If like you me? Really don’t like the hustle and bustle of getting to the party, yet get there just to have to time of your life! Then just take a break but be ready for the next one. Let me say this app right is a G- Thing OK! Now drop the WHAT’S UP!!!!!
WhatsApp banned my account with no evidence
lord oh jay on 2022-06-29
I was surprised just now that my account was banned with no reason I have to communicate with my friends now but no way now 😡😡i will never recommend this app to anyone around if the ban isn’t lifted before 24hrs. I don’t use my account to do any kind of frauds. My account is precious to me if action on how to lift the banned isn’t occur I will never recommend this app to anyone around me 😡😡😡😡
Someone would love What’s app.
Ace $$$12 L. on 2022-06-29
Whats app sometimes a thing to recognize.Where anyone who want to get some more info about your upcoming trip.well I love it good for people to let me know when your attitude comes around. They are really interested in your business to see however you are looking at the schedule for this year or your business days to know loving the problem with including me in your business business.Iphone$2020
It’s ok. Not the best
Peter Weisskirchen on 2022-06-29
It’s another App like we had Skype, zoom, etc. but as I followed, they try to make an app for the iPad. iPhone they have. But overpaid software programmers are unable or to uneducated to make the App for the iPad. Talking since 2 years about it. But unable to finish a project. In my open: all top managers should be fired and let get the young generation to work
Latest bug fixes ???
software tek on 2022-06-29
You didn’t fix anything..Now I can’t delete the messages. Or forward, that little menu does not pop up anymore. The software update ruined a perfectly working system. Since you can’t do the job right, why don’t you go do something else, like peel potatoes, or pick strawberries, like something useful. If something works don’t try to fix it idiots.
Poll-voting feature suggestion
M. Yaghmour on 2022-06-29
I want to suggest adding a feature where members in group chats can quickly create a poll where all the members of the group can vote and make decision. I believe this feature will be externally helpful for the majority of the what’s app community as it will ease the process of making decisions and sharing opinions in the group chats. Thank you
Guys PLEASE work on fixing chat migration from Android to iOS
B.B58 on 2022-06-29
After finding out the feature was announced, I attempted and spent 2 hours migrating all data from android to iOS using the “Move to iOS” app, however, only my groups on WhatsApp appeared and none of the chats. Why is it that third party softwares can do this and there is no official way that actually works? PLEASE fix this.