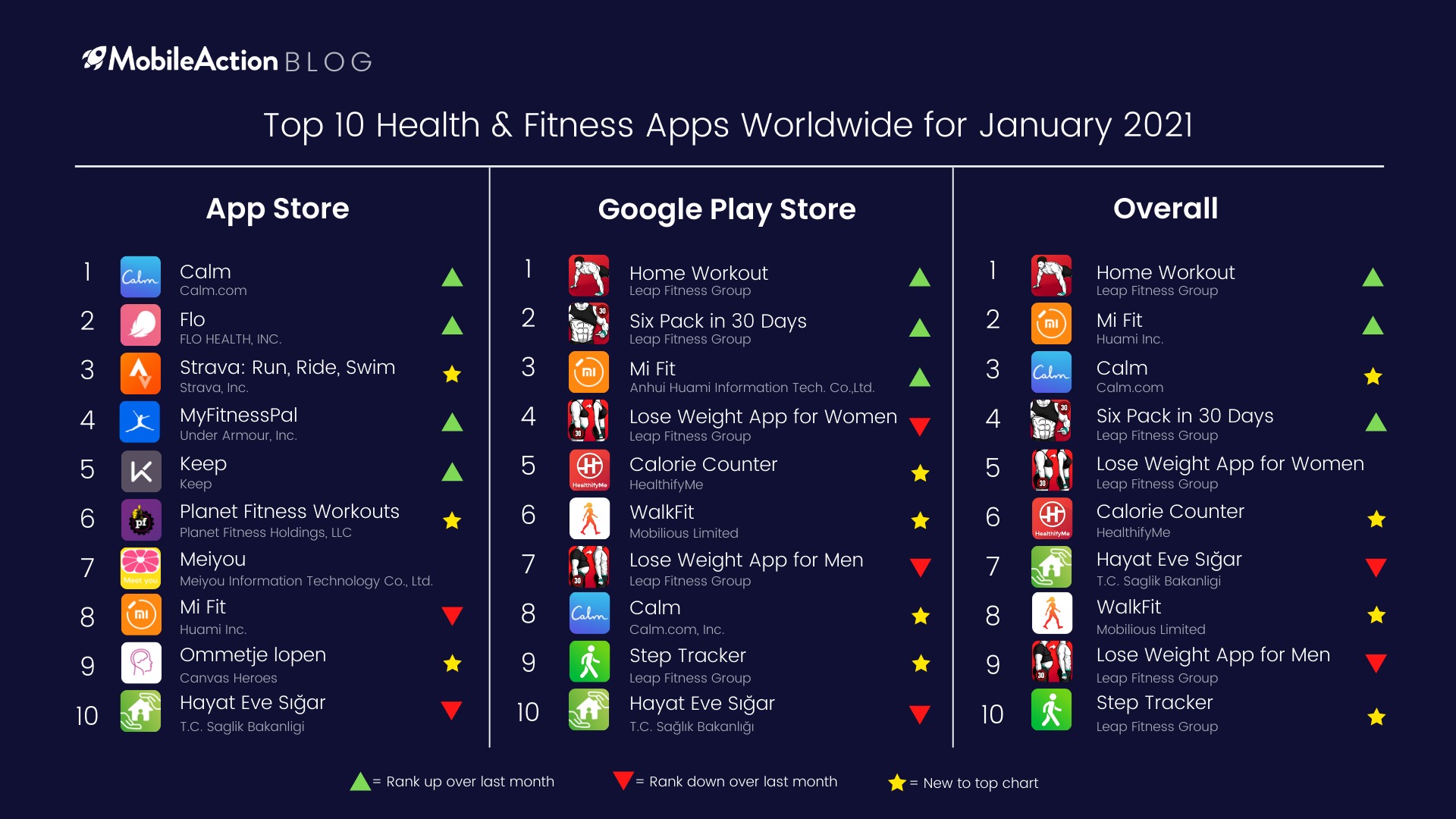 Every year we tell ourselves this is the year that we are finally getting in shape. Does this attitude impact the app stores? Let’s take a look at the Top 10 Health and Fitness apps for January 2021 and try to understand which fitness apps benefited most from new years resolutions.

Due to the coronavirus, people have been increasingly using their mobile phones to stay in shape. Naturally, the best fitness apps have found themselves among the top charts in the app stores. The Health and Fitness category has some strong players like Calm and Mi Fit who consistently rank high on the charts.

Interestingly, the top 10 health and fitness apps for January 2021 include 5 apps that are developed by the same publisher, Leap Fitness Group.

Leap Fitness Group is doing something right as can be understood from their success in the Google Play Store Health and Fitness apps. We usually conduct advertisement analysis to understand how the paid growth strategy of an app works. By looking at their campaign analysis, we draw insights about creative strategy and more.

However, it seems that Leap Fitness Group is much more focused on organic growth. That is why we will take a closer look at the ASO strategy they use in some of their apps.

When we take a look at the ASO Report for Home Workout – No Equipment, the total amount of keywords that the app is ranking for immediately draws our attention. The app is currently ranking for more than 16,000 apps. A visibility score of 93 also indicates that the app is very strong in the ASO aspect.

The app is ranking first on 409 keywords. Simply ranking on lots of keywords might not always be successful for increasing organic downloads.

To better understand the keywords that drive downloads, we can take a look at the Keyword Intelligence tool. Step Tracker – Pedometer Free & Calorie Tracker is another Leap Fitness Group app which is ranking in the top 10 health and fitness apps.

This app is ranking for 1524 keywords with a visibility score of 76. Through Keyword Intelligence, we are able to locate the keywords that drive organic downloads for this app.

Leap Fitness Group seems to target generic keywords in their ASO strategy. They are bringing in many downloads through keywords which people use to search for a specific category of apps. By targeting these keywords, they are able to bring in users from keywords such as “tracker”, “walking” and steps.

The best fitness apps are those that can reach wide audiences. If different people all around the world can make use of your app, naturally you will receive more downloads. Thus, localizing your app has great importance for extending your user base.

Especially for apps that count on generic keywords to bring downloads, localization is extremely important. Leap Fitness Group seems to have paid attention to this aspect. MyFitnessPal is another popular Health and Fitness app. Through our Localization tool, let’s try to figure out how localizing the app affected the rankings for Six Pack in 30 Days, another Leap Fitness Group app.

Here we can see the two apps’ performance in Arabic speaking countries. While Six Pack Abs in 30 Days translated its title into Arabic, MyFitnessPal did not. Additionally, both the description and the creatives Leap Fitness Group used is in Arabic. On the other hand, MyFitnessPal uses only English on its listing page. Not surprisingly, Six Pack Abs is far ahead of MyFitnessPal in terms of category rankings. Note that Calorie Counter- MyFitnessPal is the title of the app in the Play Store (most likely due to ASO purposes). These apps were compared as they both include workout tips & plans.

As Leap Fitness Group conducts localization for most of its apps, their visibility around the world is rather high. In this map, regions where MyFitnessPal has higher visibility scores compared to Home Workout – No Equipment is colored in blue. It is clear that localization is highly important for increasing rankings in different regions of the world.

Two Sides of A Coin

If you want to learn how to grow your app by developing your own ASO strategy, schedule a demo with our consultants today!