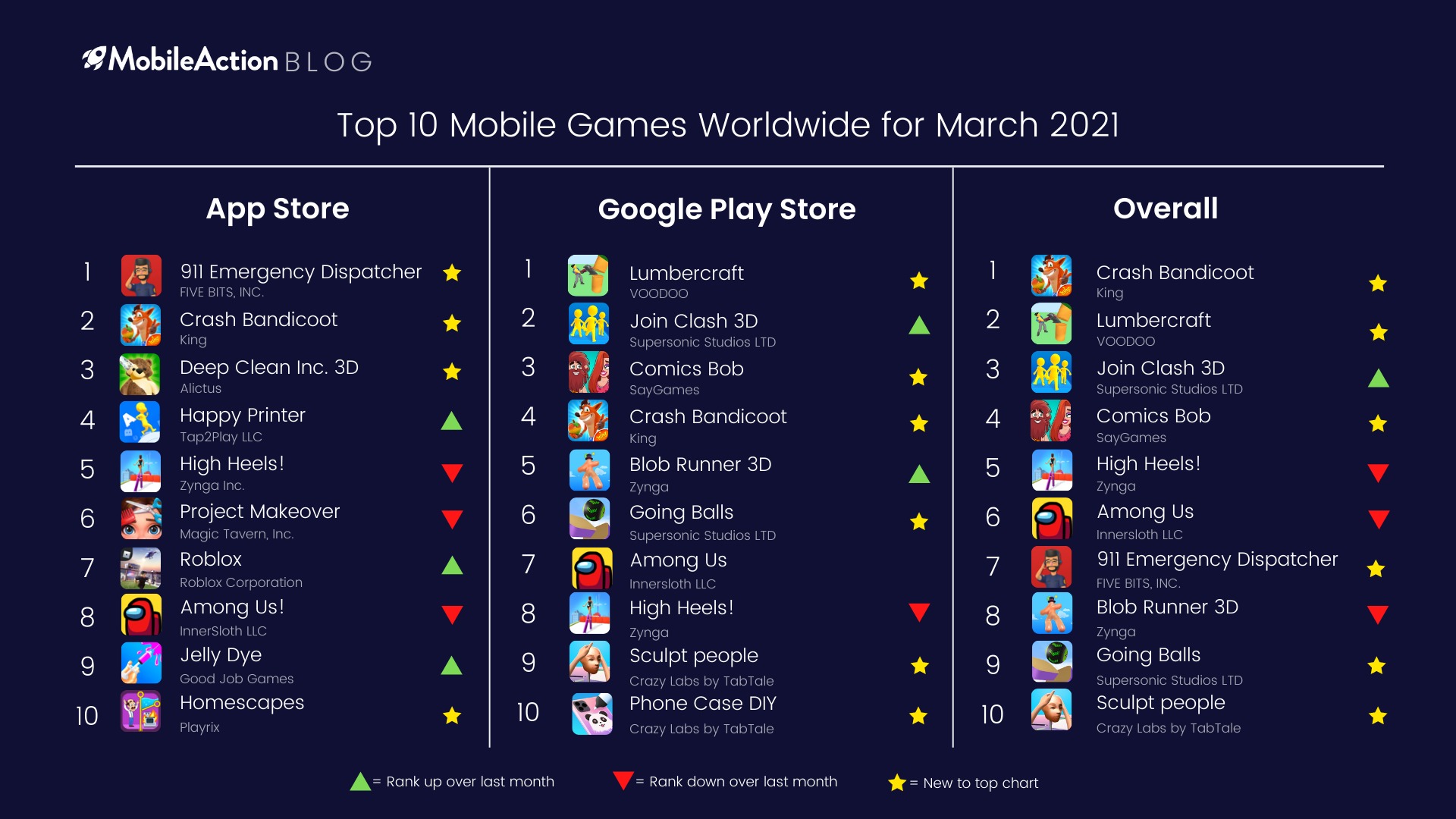 The top 10 mobile games are probably the most exciting part of the app store top charts. Along with apps that always have a spot in the top apps charts, it is easy to spot strong newcomers. It is exciting to examine their strategy and analyze whether they utilized app store optimization or creative advertising (or both) in their app marketing strategy.

In this post, we will take a look at the most popular mobile games of March 2021, and analyze their user acquisition strategy for apps. March 2021 was an interesting month for this list.

Among Us once again declined in the overall top charts, retreating to rank 6. In the App Store, 911 Emergency Dispatch took the first spot in a very short amount of time. In the Play Store, we saw a similar pattern by Lumbercraft, which took first place. Finally, a franchise we are all familiar with, Crash Bandicoot, has managed to rank near the top in both stores, even though it was released in late March. Using our app marketing tools, let’s take a closer look at these apps and try to gather insights about how to market an app.

Let’s start with 911 Emergency Dispatch. Although this game wasn’t released in March, its popularity soared during the month. Users take the place of an emergency responder in the game, interacting with victims.

As you can see above, in the second week of March, the game reached first place in three charts. First of all, their app store keyword optimization efforts can be examined.

A visibility score of 80 instantly stands out, explaining the app’s success in gaining a spot among the most downloaded games. The app is ranking on a total of 2144 keywords while ranking first for 36 of them. A sudden increase in downloads along with increased reviews and active users seems to have caused the game to rank on more keywords, starting a sort of chain reaction.

When discussing app store optimization best practices, off-metadata factors play an important role as demonstrated by this example. Supporting your ASO efforts with paid user acquisition strategies is also a good tactic if you are planning to advertise your app.

Even though limited, we can see that the app is using Apple Search Ads to extend its user base. Right now the game seems to be bidding on only its own brand name. By increasing the number and variety of keywords they bid on, it might be possible for them to take better advantage of this user acquisition channel.

We can see that Lumbercraft is using 11 mobile ad networks to distribute their ads in 9,217 apps. In March 2021, 667 creatives were used by the app, nearly half of them being still active. As we are used to seeing in the mobile games category, the game mostly uses video creatives.

This app is also using Apple Search Ads to boost app download. Lumbercraft is bidding on 734 keywords across 8 countries. Having a good Apple Search Ads and ASO visibility score, the app definitely has an all-rounded marketing strategy.

In late March, King released Crash Bandicoot in both app stores, taking first place in the overall most downloaded games list nearly in a week. It certainly helped that Crash is already a huge game in the industry.

The users seem to be enjoying the nostalgia and with an average rating of 4.66, the game is certainly popular. However, no matter how big of a brand name you got, if you do not know how to promote an app, you will have difficulties increasing/maintaining your downloads.

When we look at their update history, we can see that they optimized their description and short description in the Play Store. As these fields are directly indexed for keywords, keeping them up to date is central for any App Store Optimization strategy.

With a Visibility Score of 86, the game is really easy to come across in the app store.

When we check the keyword intelligence for Crash Bandicoot, we can instantly see that nearly half of their downloads are coming from their brand keyword.

This is the end of yet another top 10 mobile games article. With exciting newcomers, March 2021 has definitely been an interesting month for the gaming category. If you would like to gather your own insights with our intuitive app intelligence tools, feel free to schedule a demo with us!