Blog Ad Creative: Differentiating Yourself From Others

Ad Creative: Differentiating Yourself From Others 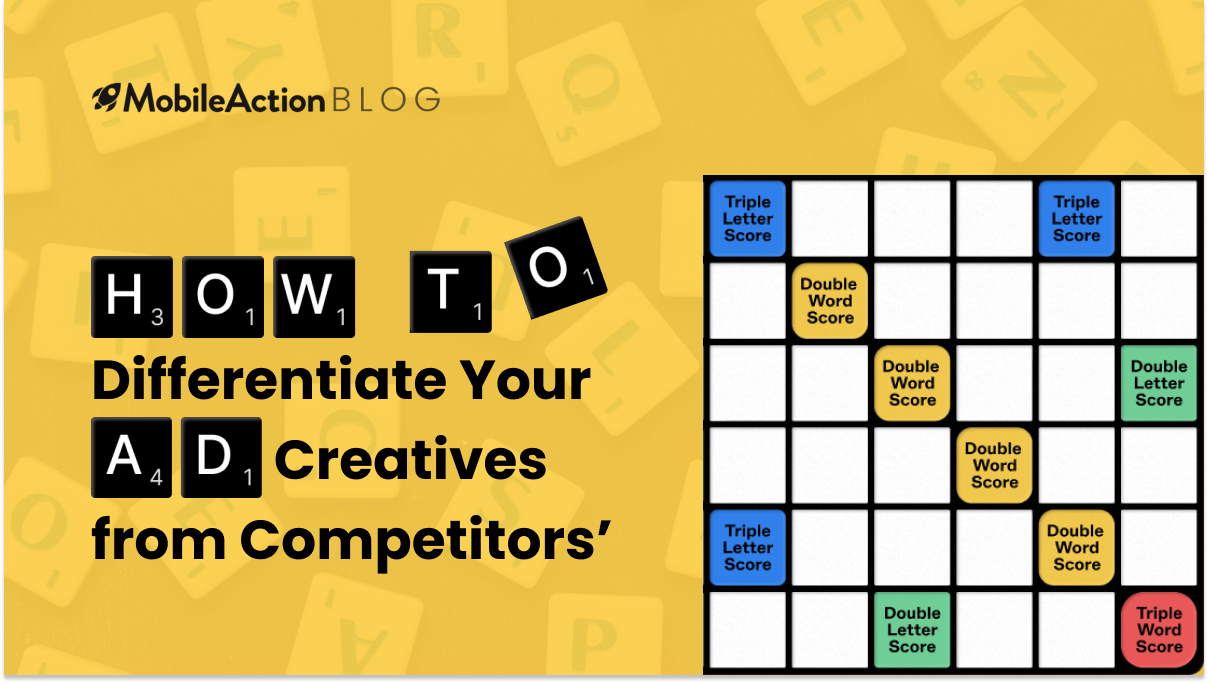 The rivalry in the mobile game industry is getting much fiercer. It is not only because new games are being published each day but also they come up with new methods every day to differentiate their ad creative from those of similar apps. This article will show you some of the best practices to make your app stand out among the competitors.

Mobile ad intelligence tools allow companies to uncover the best-performing ad creatives of their competitors, analyze the A/B tested creatives in any geo and see the ad networks they place their ad assets on. This practice helps companies to reduce their learning cost while designing ad creatives and of course, increase their tap-through rate.

Let’s assume that we are planning to launch a new word game in iOS and have no idea either about our competitors and the mobile ads that perform successfully. Before launching our brand-new game, we should be aware of the competition in our category and the best practices of our competitors to avoid wasting time and money, as well as to get off to a flying start.

By using our Ad Intelligence tool, we will be able to track all the word games that are running ad creatives. This will allow us to identify our competitors in our category, see the mobile ad networks they work with, the countries they target, and their ad creative strategy. Let’s take a deeper look.

With the Top Advertisers feature, we will have access to a comprehensive data set of over 214,000 app advertisers, where we can find all of our competitors at the touch of a button.

First step will be to narrow down the advertisers. As you can see above, we filtered the mobile apps that contain the “word” keyword in their app name and include “word games” in their metadata. We can also see the apps that are organically ranking for “word” keywords. In this case, we will be analyzing 4 different word games out of 71. We categorized these 4 games into 2 as A and B.

If you’re looking for how to promote an app, Campaign Analysis section is a great starting point. You can reveal the ad campaign strategy of your competitors. Let’s get into analyzing groups A and B to find if there are any similarities or differences in their ad creative strategies.

First, let’s take a look at the word games that are in group A.

According to last month’s data, Words of Wonders placed its creatives to 11 different ad networks. The major ad networks they work with are AdMob, Unity, Mintegral and Facebook. 18% of their creatives were published as images, 55% were videos,  26% were HTML and 1% were playable creatives.

Wordscapes placed its ad creatives mostly on Applovin with 93% and only utilized 4 ad networks in total. Unlike Word of Wonders, they focused more on playable ads instead of images with 16%.

Above are one of the top-performing ads of each word game. As you can see, each ad creative uses similar kinds of backgrounds in their campaigns while presenting their games. Also, both creatives are in playable format where users can engage with the ad and have the same gameplay.

Now, let’s start checking the campaign strategy for the apps in group B

Word Collect utilizes 12 different ad networks including Applovin, Facebook, Instagram and Messenger. Its creatives were seen in over 9 thousand apps. Moreover, 90% of their creatives were videos, 5% were images and 4% were in HTML format.

Meanwhile, Word Connect utilizes 7 ad networks including Facebook, Messenger, Instagram and Admob. Its creatives were seen in almost 5 thousand apps, which is less than Word Collect. Unlike its competitor, it focuses more on image and html formats with 14% and 8% respectively.

As you can see above, these two creatives look similar. For instance, both ad creatives were in video format. They also have similar ad contents and each contains a finger guiding that shows the right choice.

Which group (A and B) has more impressions when compared one to the other?

Let’s start by analyzing the differences between the ad creatives that are in groups A and B. For group A, both ad creatives are playable, allowing the user to be engaged with the game while watching the in-app ad. They both include a peaceful background and let users play the game before taking any action.

On the other hand, ad creatives that are in group B were released as videos. This does not let the user engage with the ads like playable ads. Both creatives have the same content, trying to attract users by asking to correct each sentence’s correct spelling. Unlike group A creatives, the users have less idea about the user experience for either app. There is no doubt that playable ads allow for more interaction. Naturally, they increase the chances of a tap and hopefully a download.

If you are also interested in checking your competitors and their top-performing ad creatives, you can either schedule a demo for a comprehensive overview or use the free version of MobileAction Ad Library.

Creative Testing on the App Store: Best Practices from…

7 Tips To Get Your App Featured on the…