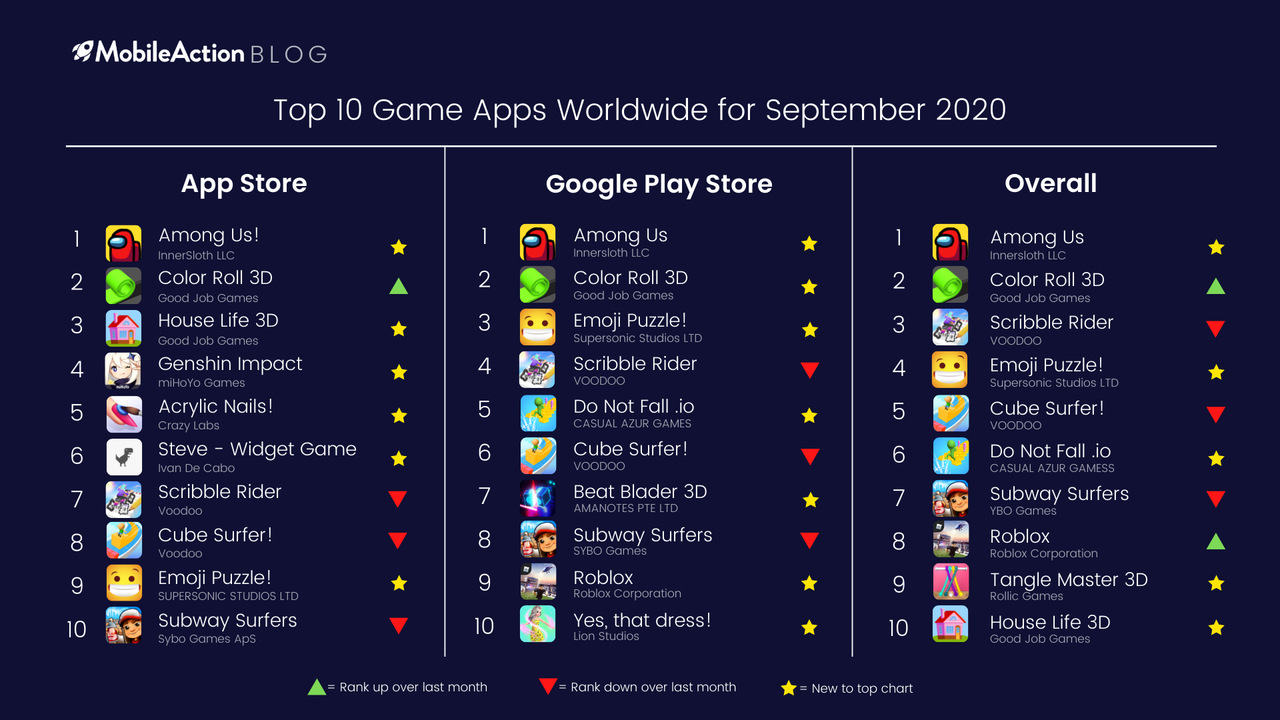 The above chart shows the Top 10 Games Worldwide in September 2020 for the App Store, Google Play Store, and both stores combined. The apps are sorted based on their download estimates.

There are lots of newcomers this month. Among Us! was the most downloaded app for the App Store, Google Play Store, and overall, despite being new to the Top 10 list. We’re 7 months into the pandemic and when boredom strikes mobile games are the first we turn our heads to. Among Us! being played online either in private rooms you create with your friends or by joining a random room around the world, makes for a perfect quarantine game.

However, game is one of the most competitive categories in the app stores and it doesn’t just take luck but also strategy getting into the top 10 list so suddenly. Let’s take a look at where they’ve gotten their organic downloads from and their popularity around the world.

How Among Us Gets Its Organic Downloads

The table above is from the Keyword Intelligence from MobileAction’s ASO Intelligence feature. The percentages show the share of organic download estimates from each keyword. The first thing that caught our attention is the 67% of Among Us! downloads coming from its own app name, which can tell us that despite being fairly new to the top charts, Among Us has a strong brand name. Besides brand keywords (the keyword that is used to directly spot a specific app in the store), Among Us! got the majority of its downloads from keywords like “games” “free games” etc. which can further indicate to the game’s popularity right now.

Another thing we can see on the screenshot above is Among Us!’s whopping visibility score of 94! This is an A+ visibility score, so let’s go over to their Visibility Chart to see if there has indeed been any spikes in their visibility for the past months.

Visibility History of Among Us

We can also see that Among Us! has a pretty good visibility around the world. The darker the green the higher the visibility.

Among Us! has a visibility score of 80-100 in 59 countries, in fact, it has a good visibility score for almost all the places it’s available at. This further shows us how much of a global hit it is!

We have presented you with the Top 10 Games for September 2020! We are fast into autumn and summer might be long gone, but with the pandemic still going games are in as high demand as ever; specifically, games like Among Us! that allows us to be connected while still being apart, are bound to do well.