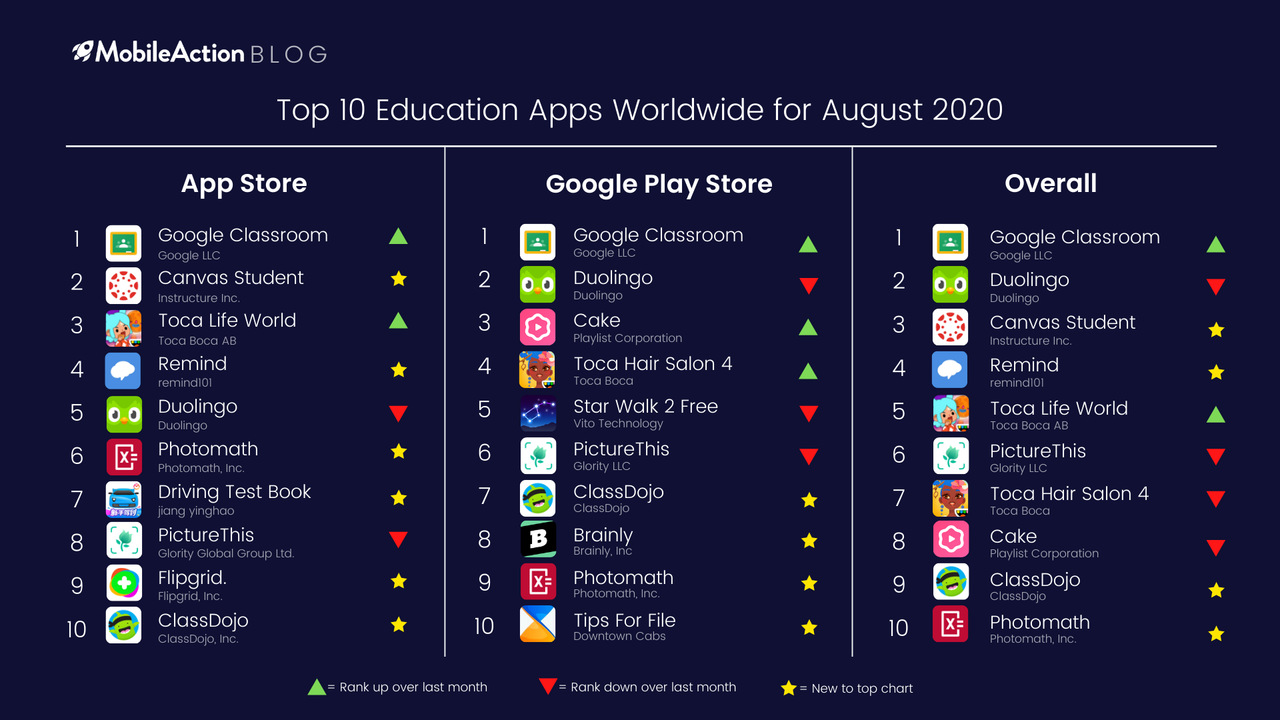 The above chart shows the Top 10 Education Apps Worldwide in August 2020 for the App Store, Google Play Store, and both stores combined. The apps are sorted based on their download estimates.

Google Classroom was the most downloaded app for the App Store, Google Play Store, and overall. In the past months, it was surprising to not see it in its usual 1st place, but in August they seem to have gotten right back up. In the overall, Duolingo and Canvas Student followed as the second and third most downloaded Education apps in August 2020. Duolingo seems to have lost some of its ground in the App Store especially. However, in the overall list, it still came in second place. Newcomers include Classdojo and Photomath who are new to both the App Store and Play Store’s Top 10 list.

Another newcomer that has caught our attention, Canvas Student, has made very good progress in the App Store list so much so that it managed to get in the top 3 in the overall list. Despite being new to the Top 10 list, it is already 2nd in the App Store and 3rd overall. Since schools are starting again worldwide, and most schools chose to do online full-time and some offer it until further updates on coronavirus, its no wonder there are new education apps on the Top 10 list. Education stops for no one and improvements and change needs to be welcomed in today’s day and age.

To see how they’re in the top 10 with widely known and trusted education apps like Google Classroom, let’s take a look at where they’ve gotten their organic downloads from.

How Canvas Student Gets Its Organic Downloads

The table above is from the Keyword Intelligence from MobileAction’s ASO Intelligence product. The percentages represent the share of organic downloads from each keyword. The first thing that catches our attention is 44.88% of the shares coming from the word “canvas”, which is part of their brand name. The next thing that catches the eye is the “B” symbol next to some of the keyword. This simply implicates that those keywords are either Canvas Student’s or its competitors’ Brand Keywords like “class dojo” for example.

To put it briefly, a brand keyword is a keyword that is used to directly spot an app in the store. For instance, if you type in the App Store’s search bar “student” you will get thousands of apps that are related to education and being a student somehow spoiler alert: if it’s not an education app, it might a roleplay app and well, downloading it would still be up to you…;)

To get back on track, if you were to type “Canvas student” that makes it a brand keyword as it is an app’s exact name.

Canvas Student gets a good chunk of its downloads from both its own and other brands’ brand keywords. This is a good time to remind you how important it is to target not only your own brand’s brand keywords but also your related competitors as they can be a great source for organic downloads. Even if someone types in “class dojo” they might end up liking another related app better whilst searching. It is one of the best ASO strategies to follow.

Besides targeting brand keywords, Canvas Student also targets its app’s misspelling which is another smart strategy. Misspellings happen all the time, we all have been there, so it’s a good detail to imply to strategies.

Let’s now go over to Visibility Report from our ASO Intelligence. And see their visibility score history for the months of July and August.

Looking at the Historical Visibility Chart above, we can see that Canvas Student definitely got a boost in their visibility in August in the United States. They reached their peak on August 29th with a visibility score of 90.57 and seem to have been following steadily since. But even their lowest visibility score during these 2 months was an 83.43, which is still pretty good.

We are dealing with a global pandemic, however, and education should be available to everyone. Let’s see how Canvas Student’s Localization Performance is.

Canvas Student has a visibility score of 60-80 in 19 countries and 80-100 in 5. That shows us that it has pretty good visibility worldwide.

We have presented you with the Top 10 Education Apps for August 2020. Summer has, alas, come to an end. Most of us including our younger selves have been stuck at home for what feels like forever, although somehow last month most of us can recall is May 🙂 The virus doesn’t seem to be going away, at least for the time being. But as there is today, there will tomorrow and education is our future. We hope you enjoyed this blog post.