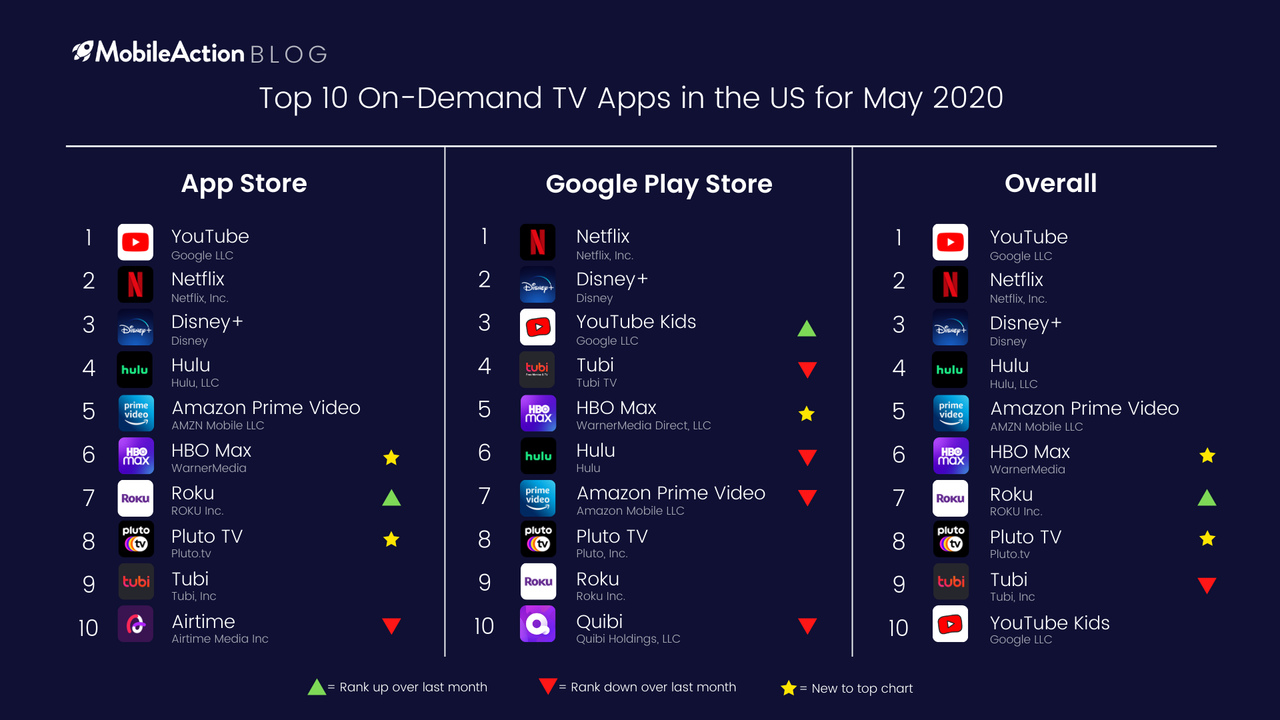 The above chart shows the top 10 most downloaded on-demand tv apps for May 2020, in the App Store, Google Play Store, and both stores combined. The data is for the United States only.

YouTube was the most downloaded streaming app on the App Store and overall. And it has kept its place as number one for the past 3 months. Along with Netflix, Disney+, Hulu, and Amazon Prime Video, who also kept their place in the top 5. The steadiness in the top 5 could show us that people like to stick with what they know for entertainment, especially during the quarantine months.

Another app keeping its place in the top 10 is Tubi. It is 9th in the overall list and the App Store. But it came in at 4th place over on the Google Play Store.

To see how they’re in the top 10 with widely known apps like Netflix, YouTube, and Disney+, let’s take a look at how they’ve gotten on with their organic downloads.

How Tubi gets its organic downloads

The table above is from the Keyword Intelligence from MobileAction’s ASO Intelligence product. The percentages here represent the share of organic downloads that come from each keyword. At first glance, we can clearly see that Tubi is getting a lot of its downloads from competitors’ brand names. In fact, it is getting almost 30% of its total organic downloads from Netflix! That’s a huge amount. We know how important it is to use competitor brand names as part of your ASO strategy. And Tubi is a successful example of this theory. Besides Netflix, it gets a lot of downloads from other well-known brands like Hulu, Apple, Quibi, Pluto TV, HBO Max, Disney+, and Amazon Prime Video. In fact, Tubi gets over 75% of its organic downloads, targeting brand names and their misspellings.

We also see that Tubi has a current Visibility score of 96 on the App Store and 99 on the Google Play Store.

Let’s go over to Visibility Report from our ASO Intelligence now. And see their visibility score trend over the past 3 months.

Looking at the Historical Visibility Chart above, there seem to be ups and downs. But Tubi’s visibility score never went below the 95.8 point mark over on the Google Play Store. It mostly stayed in the 98-100 range, which is an excellent visibility score.

On the Top Visible Apps table, we see three apps from the entertainment category, and in fact, they’re all on-demand tv apps from our top 10 list. For Google Play Store, Netflix is the top app in its own category. However, both Hulu and Tubi have a higher visibility score. Especially Tubi seems to have beaten Hulu in rankings and has the best visibility between these three apps for most of May.

For the last 3 months, COVID-19 has forced people to social distance and stay at home. As expected, the easiest way to entertain oneself is by streaming and watching videos. So, we have presented you with the Top 10 streaming apps for May. While some believe the virus is losing its effects these days, it’d be interesting to see if streaming apps would keep up the current popularity or not. Ideally, people socializing and not staying home would be much better for all of us in getting back to normal. Its summertime after all 🙂