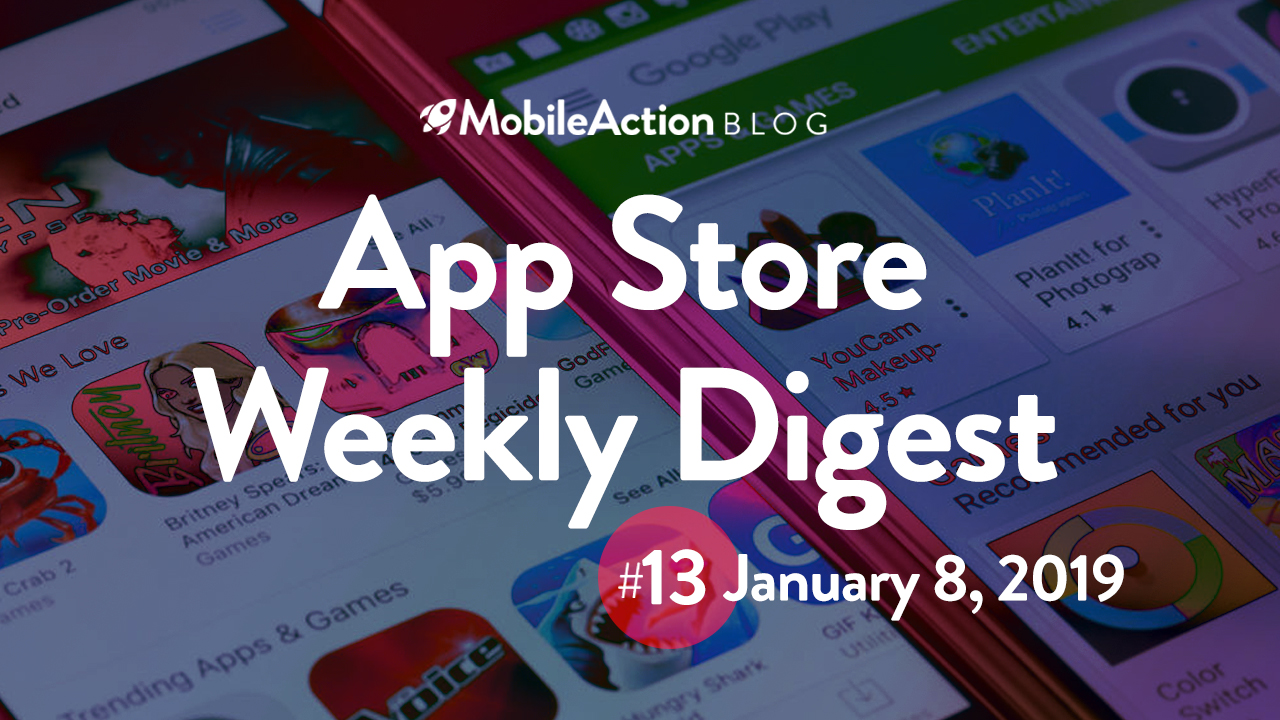 The first Weekly Digest of 2019 again curates the news, reports and statistics that appeared regarding the app industry. We have published our 2018 App Industry Report & Trends to Watch for 2019 post last week, which summarized the overall structure of the app industry at the turn of the new year.

We will continue the weekly digests also in 2019, collecting the most noteworthy news and insights from the app industry’s influential channels. Please refer to the Source links under the headlines to read the full stories. Enjoy!

Tim Cook to Investors: People Bought Fewer New iPhones Because They Repaired Their Old Ones

Wednesday, Apple CEO Tim Cook wrote a letter to investors alerting them that the company would miss its revenue targets in part because Apple didn’t sell as many iPhones as it expected. The lengthy letter cites, specifically, that people are buying fewer iPhones because they are repairing their old ones.

The $1.22 billion in App Store spending occurred between Christmas Eve and New Year’s Eve, Apple said. This is typically the peak season for App Store consumer spend, as customers load up new iPhones and iPads with apps, and use their App Store Gift Cards to buy paid apps and games.

A part of TikTok’s ambitious global expansion plan has been its more recent targeting of emerging markets — like India and Indonesia — where the company’s quietly launched “TikTok Lite” app has been gaining ground in the latter half of 2018.

The first was launched on August 6, 2018 in Thailand, but is now available across other primarily Asian markets, including Indonesia, where it’s most popular, as well as Vietnam, Malaysia and the Philippines.

This version of TikTok Lite has grown to 5 million installs since its August debut.

2018 is likely to be remembered as the year when the Chinese took over Indian smartphones. In December 2017, the top 10 mobile apps on Google Playstore looked a lot different than what they look from a year later. The Playstore rankings for India in 2018 have China written all over it. Five out of the top 10 mobile apps in India are Chinese — versus two at the end of 2017.

Epic Games, the creator of Fortnite, banked a $3 billion profit in 2018

Epic Games had as good a year in 2018 as any company in tech. Fortnite became the world’s most popular game, growing the company’s valuation to $15 billion, but it has helped the company pile up cash, too. Epic grossed a $3 billion profit for this year fueled by the continued success of Fortnite.

Earlier this year, Netflix was seen testing a bypass of iTunes billing across dozens of markets worldwide. As 2018 draws to a close, Netflix — the App Store’s top grossing app — has ditched the ability for new users to sign up and subscribe to the streaming service within its iOS app across all global markets. The change means Apple will miss out on hundreds of millions in App Store revenue per year — money it would have otherwise received by way of its standard cut of in-app transactions.

Following on from a Korean boy band sponsored by LG and Apple’s own Music staff, Huawei is the latest to be embarrassed after it sent a New Year’s Eve message using an iPhone.

Apple Music subscribers can now get their own ‘year in review,’ too, with this app

A new app offers Apple Music subscribers a way to look back at their favorite music of the year and other streaming highlights, similar to Spotify’s annual “Wrapped” feature. The app, from developer NoiseHub, is simply called “Music Year in Review,” and its sole purpose is to offer Apple Music customers their own set of music streaming insights for 2018.

New research by AdColony finds that mobile phones continue to be the dominant devices used by consumers throughout their day (82%) compared to tablets (18%).

However, WiFi is their primary data source with 69% of ad requests coming through WiFi compared to 23% on mobile data.

Meanwhile, Apple still leads when it comes to mobile monetisation (33%), closely followed by Samsung (29%). For advertisers this means that ensuring relatively broad OS and platform coverage is important and reaching a range of consumers.