Blog How to Create Google Play Store Screenshots to Get Downloads

How to Create Google Play Store Screenshots to Get Downloads

Let’s face it… Although looks can be deceiving, they can still be very important; especially in App Store Optimization. With this post, we will explore how creating Google Play Store screenshots can boost your app downloads.

Even if you have the best app in your category, people only have a few seconds to decide if they should download your app or not. Therefore, if your app store listing looks bad, they will probably pass on your app and download one of your competitors.

Yes, it’s superficial… but true. You have probably done the same thing, at least once. I know I have.

In order to compete in the crowded app stores, you need to make sure that everything about your app appeals to your target audience. This means optimizing assets like your Google Play Store screenshots.

On the surface, this may seem like a boring and minor detail. But it is one of the key factors in determining if someone will download your app or not.

In this post, we will show you how to make the very best screenshot for the Google Play app store. We will also give you some examples that will help you understand best practices. 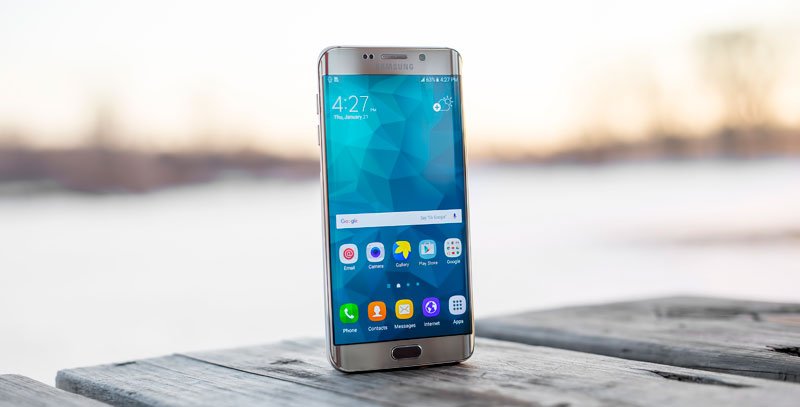 Before you start applying App Store Optimization steps, Google has a set of guidelines that every developer must conform to. Apple is very strict on these rules, and that means you should be cautious about them to avoid last minute surprises.

Google has predefined resolutions for screenshots on different Android devices, which you can check on their developer page. Google limits the number of screenshots to a mere 5. If you have a video description, you can make it one video plus 5 screenshots.

This means, just like in itunes keyword spot you have to achieve the most with your limited resources. With these 6 shots, you are trying to give a basic overview of the app, promote a nifty feature, showcase different functionalities within the app and basically sell the app.

Q: Why are screenshots important?

A: What is the “One metric to rule them all” in App Store Optimization and in particular screenshot optimization? Let me give you a hint: conversion rate.

Apple does not rank your app higher for its optimal screenshots, but the users who have already discovered your app will likely to notice a good looking set of screenshots.

Screenshots simply convey what we can expect from a particular app. Because most people are too lazy to read the app descriptions in App Store, it becomes a powerful weapon to get your users to look for more info or simply download your app to give it a shot.

Q: Which factors should I consider while choosing my Google Play Store screenshots?

A: Do not forget: Your aim is not to demonstrate your or your UI Team’s artistic capabilities. Every aspect must contribute to your download numbers at the end of the day.

Spotify is one of the most downloaded apps in U.S. App Store. Their screenshots are also effective in the sense that they combine text with great visuals and highlight key features. First image is a fancy one and offers the user a great visual experience. The background gradually switches from black to grey, which adds an extra twist to visuality. After the “winner shot”, the second image displays the different sections of the app. Another cool thing is, their descriptions create a contrast with the black background to attract more attention.

Remember, our aim is not to trap our users, but to give them as much as possible information about what they are going to encounter when they hit the download button. This is an ASO best practice that you should take note of.

Unlike our previous example, Redbox does not use text to further explain the benefits of the app. They might consider adding some text just like Spotify and Medium.

Another relatively weak point is that their screenshots are somewhat inadequate. The carrier logo makes an appearance, generally the best practice is to show the caption “carrier” or switch to flight mode and then take the screenshot.

In addition, users would have to spend some effort to understand what the app does or which functions it has without any caption that facilitates their understanding.

Our motto is “Get your users excited for what they are going to see”. The usual App Store Optimization process deals with getting your app to as many users as possible. But what after they visit your app? Screenshots should come to rescue at this point.

A first time user will probably download Spotify or Medium if he or she was randomly picking apps just to try them out.

Redbox? Umm… A user who never rented any movies would not get to know Redbox by their app, because they would not download it in the first place, judging from a visual/screenshot  standpoint. Other than that, I’d say the app itself is pretty stable and works like magic.

“Why the heck do we care about whether my screenshots are horizontal or vertical? Is it going to make a difference anyway?” You know, they say that the whole is more than the sum of the parts.

Screenshots are an important part of your ASO efforts. If they are not complete, there will be no integrity in your work. Plus, often things you do at User Acquisition department would look futile, because their value is understood later on.

A vertical shot may let your users see a part of your other screenshot, but a horizontal one will cover the whole screenshot space. There is no absolute best practice about this.

If you want to demonstrate more than one aspect in first sight, go for two vertical screenshots. If you have a nice video description for your app, you should use the video. For your ASO efforts, you have to take everything into consideration and this is one of its best examples.

Using a Video or Not

You can leverage the freedom that Apple gave you about using a video to promote your app. 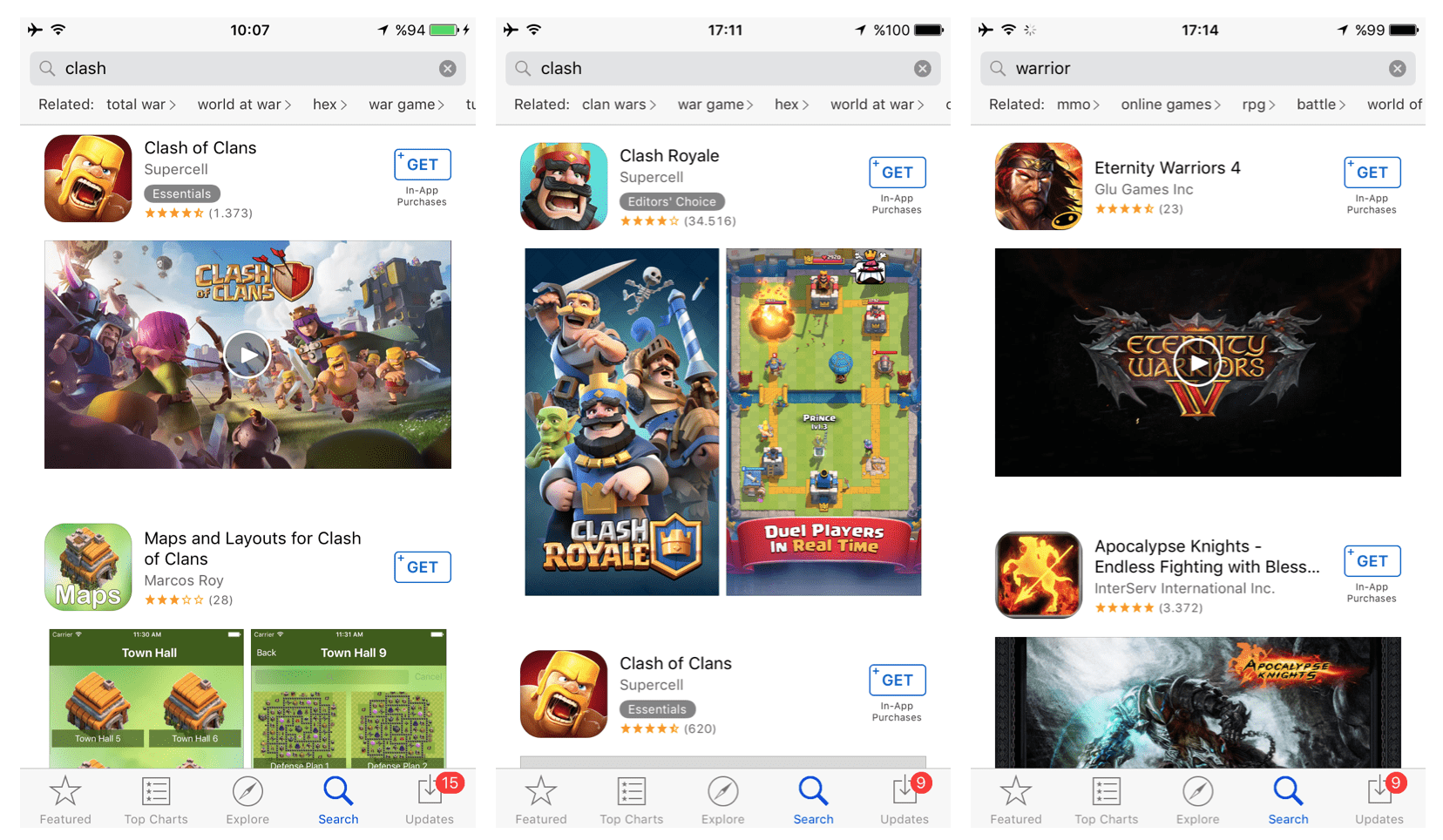 Comparison of Clash of Clans, Clash Royale and Eternity Warriors

Clash of Clans and Eternity Warriors used their space to add a video. If you are a game developer, using a video makes more sense. Why? People want to see the gameplay, and if you can attract their attention with a nice teaser, you can easily increase your conversion rate.

Clash Royale, on the other hand, opted to use two vertical Google Play Store screenshots and no video. Using a video in Games category is usually considered an App Store Optimization best practice. 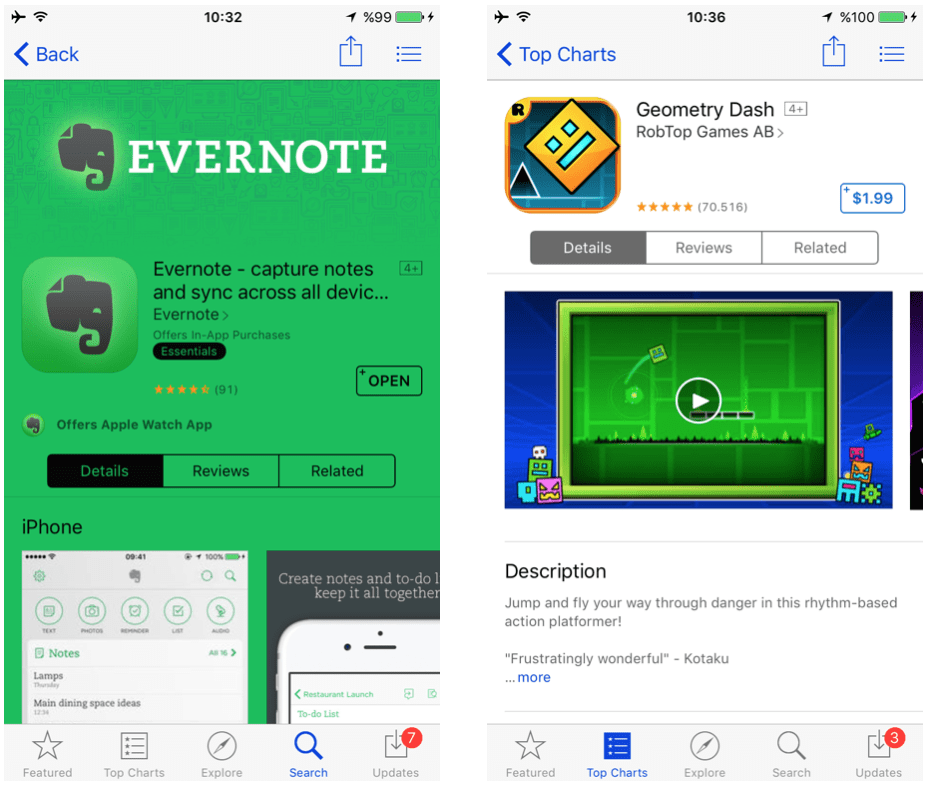 Look how different these two apps appear. Evernote has a background visual in their app page and Geometry Dash doesn’t.

Adding a background image makes you appear more professional and implicitly tells the user that this app is not a scam and works perfectly, prepared by a professional team.

You can contact Apple’s support page on additional information about this issue.

Google Play Store screenshots are just one part of your app’s visual wherewithal. Areas such as app icon, in-app graphics, and even animations remain to be taken further advantage of. To sum up, here are the App Store Optimization Screenshot Golden Rules:

How to Increase App Visibility Like an Education App