How much can you really increase app downloads with ASO alone? As you can see by the title, the gains can be quite significant.

Sagar Mutha will show us what he did to get these results and learn how you can get started on a similar path. 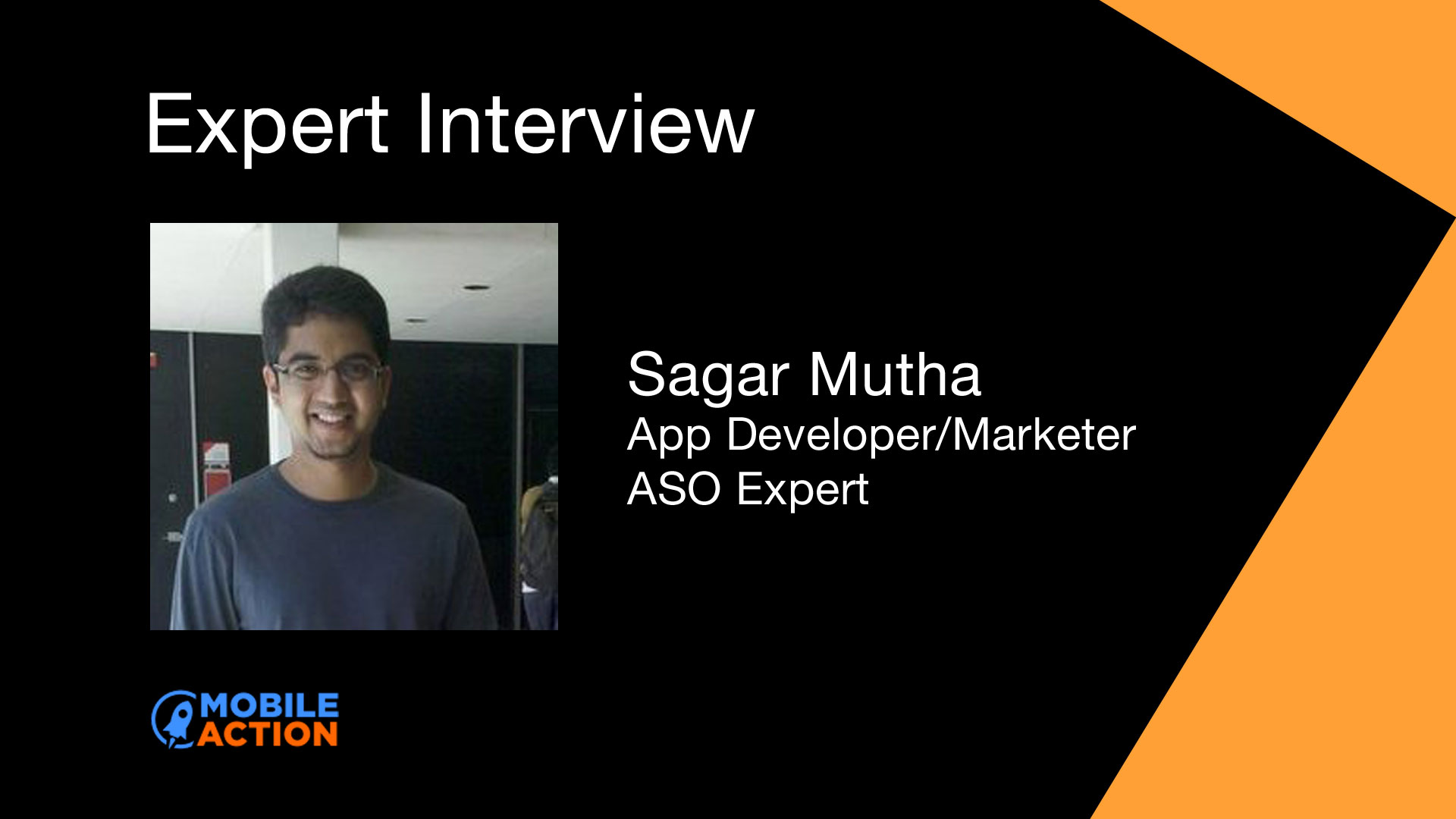 How to Create a Download Increase with ASO Interview

If you prefer the text transcript, it is provided below the video.

Hi Sagar, thanks for coming on the show.

Hey, thanks Hugh, thanks for having me.

Can you tell us a little bit about how you got started in apps?

My master’s degree is in computer science and I took an IBM development course for game development. We had to make a game, either on iPhone or Playstation and I chose iPhones.

That’s how I got into it. I made the game and I really enjoyed it, and I wanted to do mobile development full-time. So that’s how I got my first job as a game developer at Disney and I moved on to making apps after that.

Cool, what kind of apps do you develop?

I have a travel related app, for trains. I’m also working full-time for another company called Spark Pay, which was bought by Capital One. They are a payment system. I’ve worked in various categories from games, to travel apps, to payment apps.

I heard that you have had some great success with your apps, can you tell us about that?

I started by coming up with some core functionality and I put it out there. I built a bit of a user base and did some keyword research online.

Mobile Action is good for keyword suggestions and keyword research. It really helped in nailing down the keywords to use, the description and the app title. This started getting me some organic traffic. Once I had that user base, I tried to focus on keeping that user base happy.

I had a very good communication channel in the app, where users could send instant feedback. We would be very responsive and cater to their demands and the new features that they asked for.

This also helped us because these users started inviting their friends. We started seeing more organic traffic, which caused an increase in rankings. As we had some revenue coming it, we also started doing some paid advertising. That is how we scaled.

What were you using for the user feedback system?

It wasn’t a framework, it was something that I brewed myself. It helped narrow down the affected user base. They could select if it was a bug report, a feature request, or if it was a suggestion. There was a section in the app where they could just type something in and send it. The rest of the communication would flow through emails.

Can you take us through your process of choosing keywords and optimizing your keywords, your description and your app icon?

For keywords, I like to do it multiple ways. I rely on Mobile Action a lot and use the keyword suggestions and percentage chance the most. Not all keywords that are the most highly searched on the App Store and the Play Store are going to be good for you because those are the ones that also have the most competition.

That was one of the strategies that I started off with. As my app started getting more popular, I started ranking higher and higher. That’s the point where I could start to target those high volume keywords.

When I first launched the app, I used to update my keywords every release, which was about once every three to four weeks. It was to get a sense of was working and what’s not. It’s testing the market, you always have to experiment and see what works for you.

I’ve found that the app title is a big factor and it has the most keyword weight.

For app icons, I did some mobile A/B testing. I created 2-3 icons and there is a website where you can test icons. It’s not connected to an app, but you can upload your icons there and you can see the percentage chance of which icons the users are likely to tap on.

That gave me some feedback on which icon people found most attractive. That’s one of the most important factors.

I don’t remember what it was right now, but it was something that our product manager at Disney had found because we used to do a lot of experimenting with icons in the games that we launched.

What about app descriptions? Some people say that you shouldn’t optimize them too much. What do you think?

I’ve seen different experiences with the app description between the App Store and the Play Store. On the App Store, there is more weight on the keywords that you specify [in the iTunes Connect keyword field].

In the Play Store, the description really matters. I’ve seen my app rank for keywords that I put in the description, which it didn’t rank for before. So they are definitely doing some SEO. It also depends on the keyword frequency.

But it’s a gray area because they also don’t want you to over use a particular keyword in the Play description, just to rank your app. You may be flagged as trying to game the system. It’s always good to have a good description, with all the related keywords. But don’t over use it.

Can you give us an idea of how you feel ASO has helped your app?

I would say that without ASO, my app would not be in the place it is. When I first launched my app, I had given ASO some thought, but not much in detail. I had a general idea of what people were looking for and I based my keywords on what I thought they would look for and how I would search.

But once the apps were live, I was getting only 10 to 12 downloads a day. So I had to take a step back and spend a good amount of time researching the keywords and optimizing them. Once I did that, I started to see some organic traffic.

You need to have a good app, but it’s also very important to have a good ASO strategy in place. Otherwise, there’s no use in having an excellent app, if nobody can find it.

Totally. Can you give us an idea of the percentage increase or total number of downloads that have come as a result of doing good ASO?

Cool, If there is one tip that you could give to people who aren’t familiar with ASO, what would it be?

I would tell them to join Mobile Action Academy. There are a bunch of videos and it gives you all the information you need to get started. I’ve tried a lot of ASO tools, and Mobile Action gives you a lot more than the competition offers…even the free version. It’s a good place for anyone to get started and start exploring ASO.

Appreciate it, thanks. What about someone who is stuck? They have done a little bit of ASO and want to get to the next level, but they are frustrated. What would you recommend to them?

I would say that it’s a game of patience. Don’t expect results overnight with ASO. Give it time…if you modify your keywords, give it at least 3 to 4 weeks. The changes don’t take place overnight. It’s also one of the ways to stop people from gaming the system. They don’t want people to see instant changes, so the changes are more gradual.

You have to be patient, try it for 3 to 4 weeks, if it doesn’t work out, do more research and change the keywords. Keep finding out what’s best for you.

Great! Again, thank you very much and talk to you soon.

We hope that you have learned a lot from this interview and we would like to thank Sagar for taking the time out to speak with us.

As he mentioned, remember that ASO is a game of patience and you might not see results right away. He has seen a tremendous increases in app downloads, but it has taken time. So keep at it and remember that we are always here to help!

You can reach Sagar here. He is also a Mobile Action Ambassador. Click here to sign up for MobileAction Academy and learn how to increase the organic downloads of your app.

How To Find the Rising Star Apps to Invest