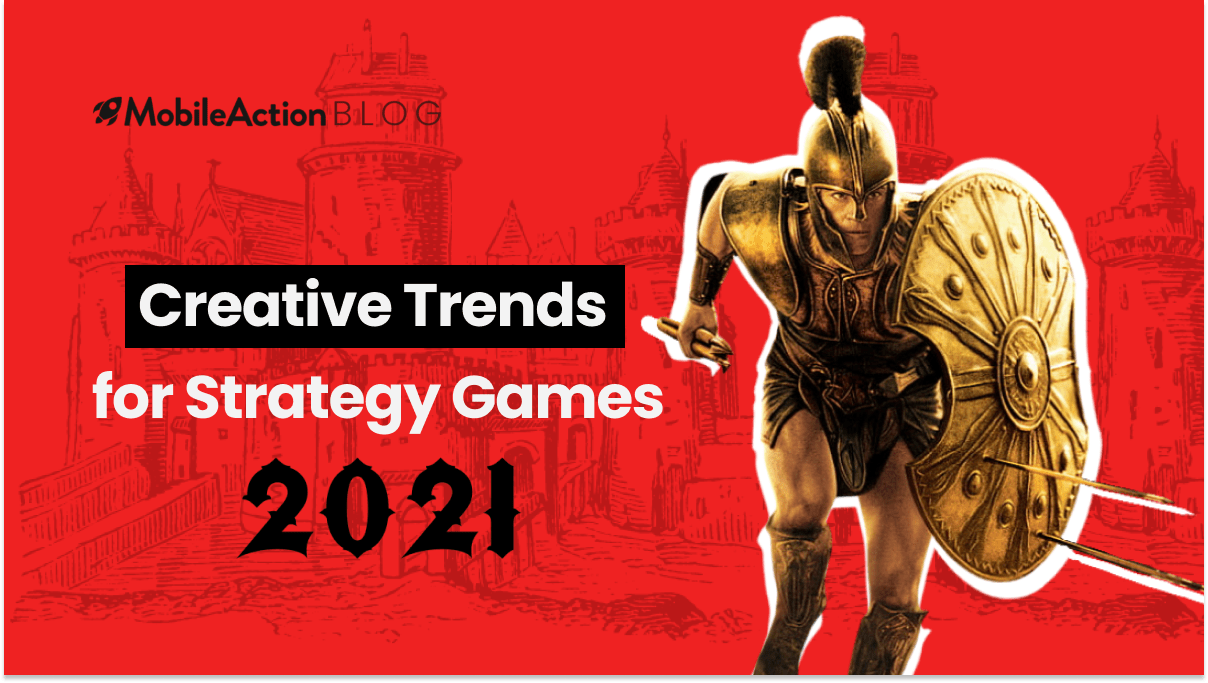 Mobile Strategy games are becoming increasingly popular. As people are using their phones to game more than ever, mobile strategy games offer an in-depth experience that is hard to match. Thus, it is always possible to spot a strategy game amongst the best mobile games charts.

Creative advertising is central to most of these games’ app marketing strategies. In this article, we will take a closer look at various factors that helped these games to earn their spot along with the most downloaded games. Using ad intelligence tools, we will look at the mobile ad networks they prefer, the type and content of creatives they publish, and more. Thus we will acquire insights regarding the mobile app marketing tactics of strategy games. To be descriptive of current trends, the app intelligence data will include the first three months of 2021.

Let’s start by explaining the method we used to pick strategy games to include in our article. Using our Top Advertisers tool, we chose 10 leading strategy games for each month of 2021.

It is quite easy to filter the top advertisers list according to our needs. In order to view mobile strategy games, we simply chose the platform, category, and keyword. Searching for the keyword “strategy” allows us to find apps that organically rank for this keyword.

Above you can see the top 5 advertising strategy games in March 2021. Notice how high all of these games are ranking on the overall Top Advertisers list. Top War: Battle Game has been leading this chart for quite some time now.

To get a good understanding of the category, we analyzed the data of the top 10 advertising strategy games in the first three months of 2021.

To get a high-level understanding of the category, let’s check the total amount of unique creatives along with the average number of ad networks used by strategy games.

Since January, a slight increase can be observed in the number of unique creatives. In January 2021, 22.144 unique creatives were published by the top 10 advertisers. In March, this figure reached 25.006. Interestingly, we can see a slight decline in the average number of ad networks used by these apps. With the IDFA changes coming up, it is possible that this number will keep changing.

A similar case is apparent for Google Play Store. Ad Intelligence tools indicate that while there was a slight increase in the number of unique creatives, mobile strategy games reduced the average number of mobile app ad networks they work with.

Another factor to consider when preparing your paid user acquisition strategy is the use of creatives. If you know a thing or two about how to promote an app, you know that not every creative performs the same. Thanks to mobile ad intelligence, we know that constantly optimizing your creatives according to performance is critical for the user acquisition process.

In the Google Play Store, the top 10 advertising strategy games have published more creatives in March 2021. App Store had a total of 19,180 creatives compared to the 21,358 from the Play Store.

Interestingly, the number of active creatives seems to be less in the Google Play Store. While 19% of creatives in the App Store remained in circulation, Play Store had a ratio of 15%. This data shows us that app marketers pursue a more aggressive testing procedure for Android apps. Creatives are taken out of circulation faster compared to the App Store.

In order to dive into more detail, let us take a closer look at the paid campaigns of some of the leading strategy apps.

Starting with Top War in the App Store, we can see that they published their creatives in 14,513 apps in March. Their creatives were mostly videos at 60%. They used 10 mobile ad networks to distribute their creatives. Facebook, Admob, and Unity take nearly 72% of Top War’s Creatives.

Lords Mobile: Kingdom Wars is one of the top advertising strategy games in the Play Store. The app is using 16,634 apps to publish its creatives while using 12 ad networks. Similar to Top War, Unity, Admob and Facebook are the prominent ad networks in their strategy. Nearly 83 percent of their creatives are videos or images.

Evony is yet another popular strategy game. Ebony used 11 ad networks to publish 666 creatives in 13,317 apps during March 2021. Again, we can see that the distribution of creative types is similar to other apps, videos taking the majority share.

When trying to figure out how to market an app, you should also make informed decisions about the format of your creatives. Different app categories seem to have some pattern of creative types. For example, while shopping apps mostly use image creatives, gaming apps mainly use video creatives. Now let’s look at the types of creatives used by mobile strategy games.

Generally, strategy games seem to be using similar creative formats on both platforms. Video creatives are the most frequently used creative type in both the App Store and the Google Play Store.

Approximately 48% of all creatives used by strategy games are videos in both stores. In the Play Store, Image Creatives seem to be used more often, with almost 30 percent compared to 23 percent in the App Store. HTML ads seem to take a bigger share in the App Store with 28 percent while the opposite is the case for Play Store.

Now that we conducted a general app market analysis, we can go down to the creative level and look at some of the methods used by strategy games. Ad Intelligence tools are the best way to take a peek at competing apps’ creative strategies.

Image type creatives can provide limited content compared to playable or video ads. That is why you should aim to make your image creatives as effective as possible with the correct visuals and call to actions.

We can see that Top War is trying to use many different aspects of their game in their ads. “Customize Your Island”, “Battle for Freedom” and “Dominate Rival Commanders” are some of their titles.  Notice that all three have the ability to attract different kinds of users.

Family Island also seems to be following a similar strategy in their image creatives. By using different slogans such as “explore” or “cook” they are able to potentially attract a larger audience.

Video Creatives are used frequently for a reason. Compared to image creatives, they allow app marketers to transfer more information to users in a short period. A 10-second video can include most of the game dynamics, rapidly drawing in users.

The above video demonstrates our point. Lords Mobile has managed to fit a lot of the UX into a short video. This allows users to decide whether or not they are interested in the app quickly.

State of Survival also frequently uses video creatives. As you can see, we can instantly see combat footage from the game as well as the more “strategic aspect” which is base building.

Puzzles & Survival seems to have a different concept than the previous apps. Even though it is a strategy game, the interface is more similar to a typical bubble-popping game.

For strategy games, the competition seems to be increasing as indicated by the increasing number of creatives in stores. In the Play Store, a more aggressive strategy where creatives are more frequently taken in and out of circulation seems to be the general approach. In the App Store, the opposite is the case. Also, video creatives seem to be dominant in the category, consisting of nearly half of all creatives on both platforms.

If you would like to learn more about our industry-leading ad intelligence tools, feel free to schedule a demo with our experts today!