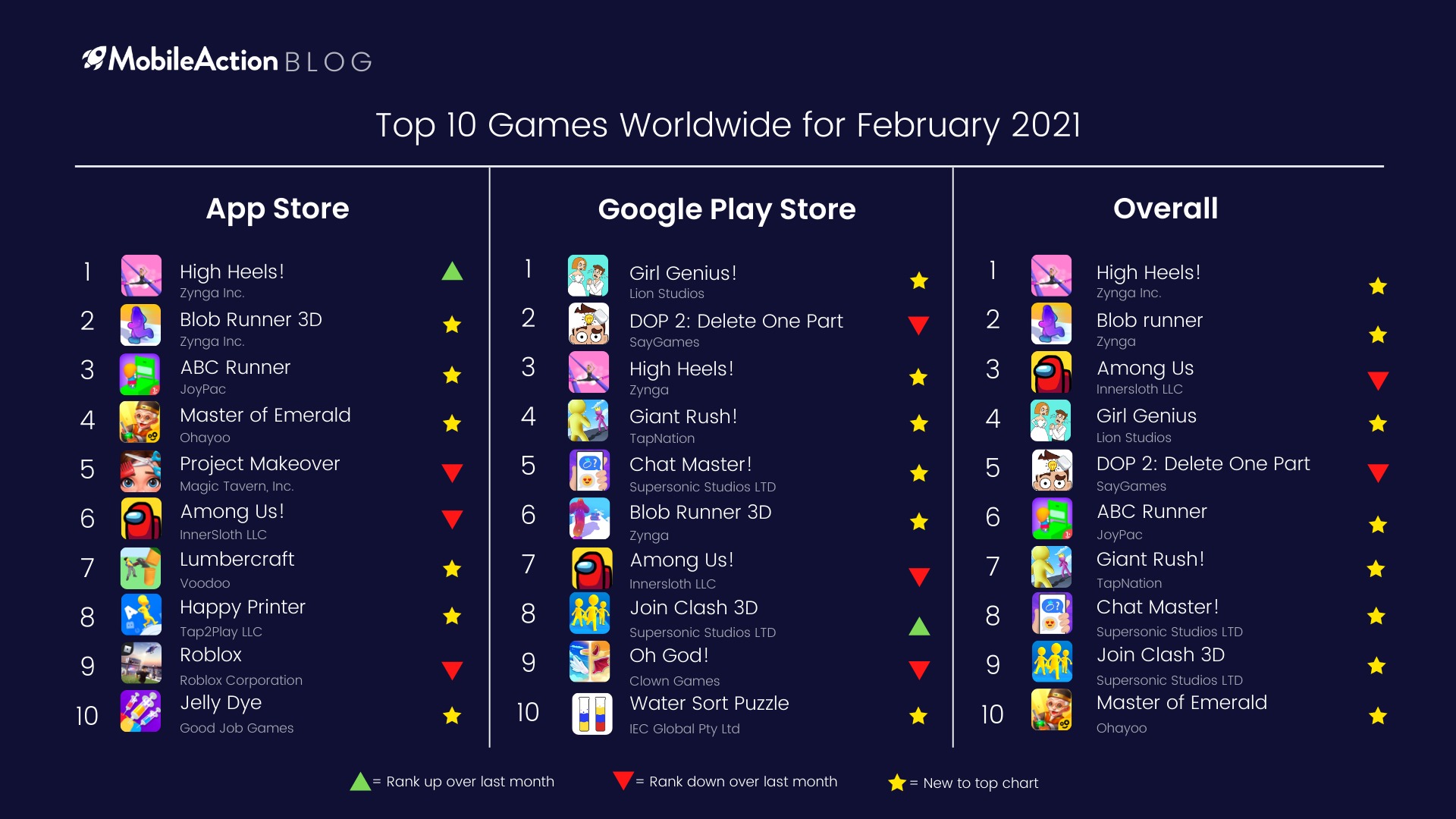 The top 10 mobile game apps worldwide is always a vibrant category, but this February we have seen much more movement and change within the category than normal. It is hard to hold on to your title as one of the best mobile games. Though we can still see Among Us! Hanging on to the top 10, we only have three returning apps from January. Interestingly enough, we also have an app making a comeback.

Chat master has made a return to the top charts after dropping down for a few months. It has now returned to the top of its category ranking. Zynga also has 2 apps in the top charts this week: High Heels and Blob Runner. Let’s look into Chat Master’s comeback and Zynga’s tricks to achieve two top apps at one time. Maybe we can learn something we can apply to our own app marketing!

Chat master has made a comeback!

Chat master has been a topic of discussion on our posts before. Back in November of 2020, we discussed how Chat Master’s advertising techniques had gotten them to the top of their category. Now that they are back at the top again, we can look at what they changed and how they adapted to stay strong in this competitive market. How does one adapt to the changing game market to be one of the best free mobile games?

What has changed with Chat Master!

Back in November when we looked at how Chat Master! was doing their advertising they were doing a few things differently. In November we talked about app store keywords and how they were using ASO strategies to increase app visibility. Their in-app ratings and reviews have also changed since November. Looking at our ad intelligence tools, we can also glean some useful information about changes.

They have managed to increase their ratings.  At the time it was using mostly videos and images, with a very small amount of playable ads and then an even smaller portion of Html ads.

Since then, chat master has had many updates and removed Html ads from their roster. They are also using fewer ad networks. They have also shifted their emphasis towards Unity. Their ad publisher count has increased by a few as well.

In general this shows that they have found out what works for their app and what doesn’t and are concentrating their efforts towards what gets them the best results. They have increased their playable ads, videos and images by removing Html. It is also plausible that they have discovered which ad networks are getting them the most ROI and have stopped advertising on those that are not bringing them as many new users.

Chat Master! has also been busy with improving their product. They have had 7 updates since November. Since November they have added new languages, fixed bugs and updated their icon a few times.

Chat Master! Has participated in seasonal marketing, changing their icon for Halloween and Christmas. They have also updated it to better demonstrate their product.

At first glance, these two may look very similar, but upon closer inspection, they have made a couple of crucial changes.

The emojis are now inside the chat and the first bubble asks a question. This indicates the question and answer aspect of the game more than the first option. “Will you marry me?” is also an intriguing question to know the answer to and it was displayed very cleverly with just two emojis. This new icon is creating maximum intrigue with the little space that it has while also representing the game.

The added languages in the update, indicate that Chat Master! Has also been working on its app localization. Staying in the top 10 mobile games requires constant optimization. In our previous post, we wrote that because it has so many users in Asia it should consider localizing for those regions. It has in fact done that and has now added several languages including Korean, Japanese, and most recently Chinese.

Zynga has 2 games on the top charts. How do they do it?

Zynga has a very low creative count compared to the number of apps. They have the most apps in the top publishers by a lot!

This month they have both Blob Runner and High Heels in the top 10. High Heels’ rise to popularity was pushed by Tiktok where it became viral and gained a lot of traction. We have also discussed Zynga in terms of being a Casino Games publisher.

Zynga is the top game publisher on the market right now, so they definitely have something figured out as far as app publishing goes. Their apps are all within the Games category and they have a leg up on hyper-casual games and casino games. They also have some Scrabble-like word games and other such apps. They also have multiple versions of some of their apps altogether for different countries (usually a Chinese version). This is of course, not a strategy just anyone can take as it is quite costly, but it definitely takes localization a step further. Having two apps in the top 10 mobile games takes some extra steps.

The Chinese version of the app is not featured in the Top 10 mobile games, but it does have its own purpose for Zynga in capturing that market.

Seeing as China has such a big app market, it makes sense that Zynga would want to put a big effort into advertising in the country. There are also more English-speaking countries so it makes sense that the English version of the app is distributed more evenly.

The content of the creatives themselves is more or less the same. Zynga has a lot of experience in making attractive and effective creatives for their games. In this case, they have used a lot of videos of the gameplay, sped up and sometimes with intentionally frustrating results in order to tempt the potential users.

Final thoughts on the Top 10 Mobile Games in February 2021

The mobile game world is an intense one. We have a lot to learn about app marketing from these mobile game superstars. When considering how to promote an app, the top apps in your category are a good place to look for an example. Make sure to sign up for a demo so you can keep up with these apps and all their marketing strategies.