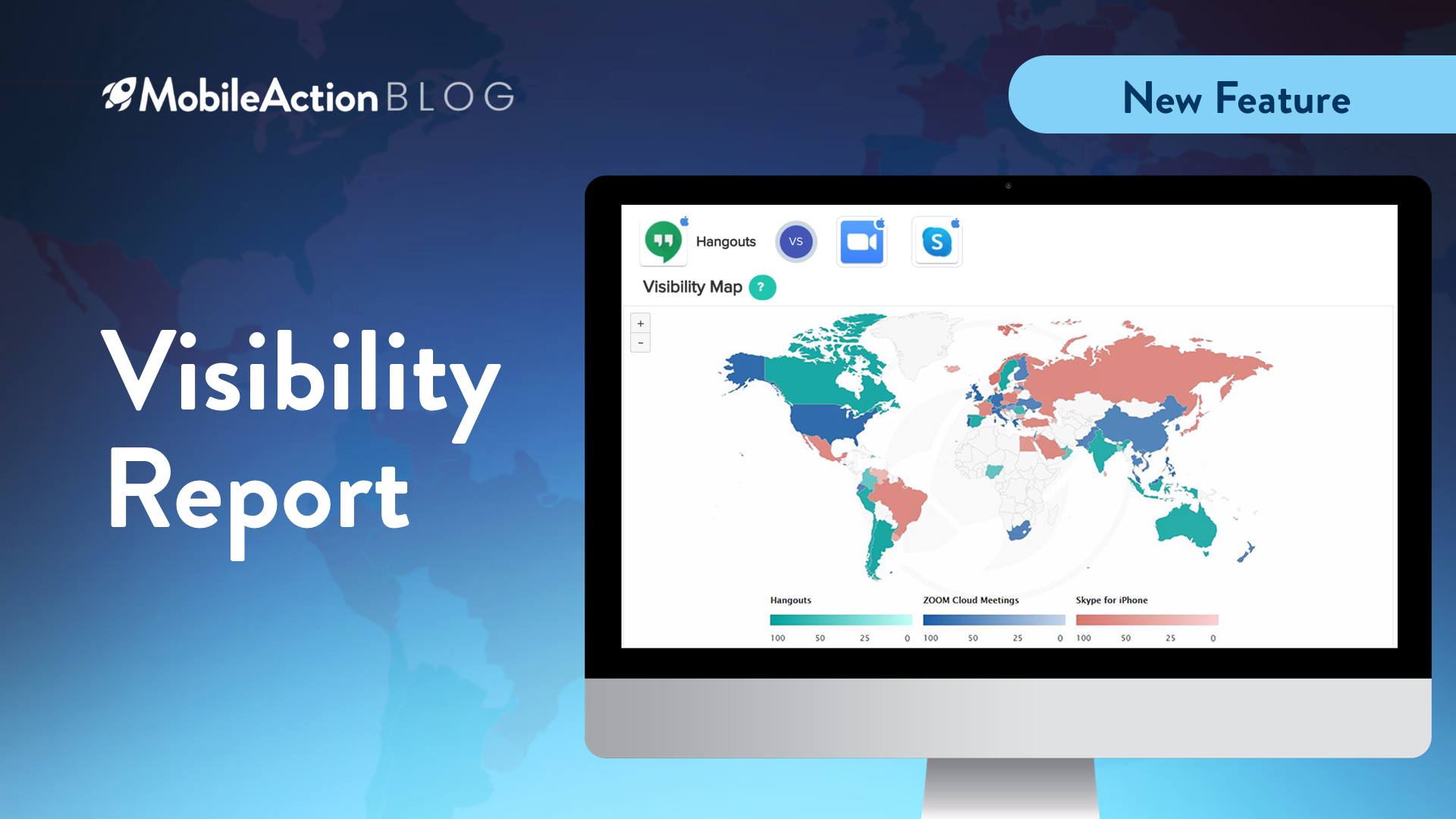 In our previous posts, we wrote about the updated Search Visibility Score to guide you better in your ASO journey. This time, we’ve come with something even bigger! We’re delighted to announce that the Visibility Report is live!

Visibility Report provides you an overall picture of the popularity of an app in different countries. Since this tool takes the impressions into account, it gives you the result of your cumulative ASO efforts for your app.

Now, if this feature gives you a snapshot of your ASO performance, you might be asking “Isn’t ASO Report doing the same thing, too?” ASO Report indeed gives you everything you need to know about your standing at the keyword level. But, the Visibility Report shows you a more high-level look about how your app’s visibility got affected as a result of your updates and whether your localization efforts paid off in the intended countries. So, it is going to be your first stop when you’re analyzing the current situation of your app in the competition.

We’ll try to show you a use case of this feature on one of the most popular apps in this COVID-19 outbreak: Zoom. Since this pandemic caused the whole world to go into a lockdown, people are using video call apps more than ever. So, what would you need to do if you were to craft a localization strategy for your video call app? Read on to see how you can make the best use of this amazing feature to gather competitor intelligence and fine-tune your ASO strategy.

👉 Before we jump in the use case, if you have any question marks about the Visibility Scores and how they’re calculated, we strongly recommend that you take a look at our previous product update post about the Search Visibility Score.

To see the visibility map of Zoom, we simply go to the Visibility Report feature under ASO Intelligence and search for Zoom app. While we are at it, let’s add two more competitors to make a comparison. Here is what we get:

The visibility map shows us which app is the most visible in which country. The darker the color, the more visible the app is. As you can see on the map, Hangouts seems to be the winner among the 3 apps in North America. While Skype took over Russia, Zoom got China to itself in the absence of the other two. And in Europe, all 3 apps are competing hard.

If you hover on one of these countries, you can see the exact scores for that specific country. Let’s take the US as an example:

Hangouts took the lead among the three apps in the US with a visibility score of 92.5. While Zoom is following closely, Skype seems to be left behind in the race. Has Zoom always been this visible in the US? The Historical Visibility Chart under the map can give some clues about it.

The Historical Visibility Chart displays how the visibility scores changed in a given time period and country. The pins above the dateline on the chart shows when the apps got an update. When we set the time window from Jan.15 to Mar. 27 and the country as “United States”, we see that Hangouts has always been the most visible among all. However, on March 10th, Zoom’s visibility score started to climb up very fast, surpassing Skype. Zoom hasn’t reached Hangouts yet, but the competition is getting fiercer as Skype’s visibility score has also started to increase.

What might be the reason for such a sharp rise? On March 9th, Italy went into lockdown and on March 11, WHO announced that the coronavirus outbreak is a pandemic. Upon this declaration, travel bans have been implemented, and a national emergency has been declared by the US Government. These news got companies and schools to operate remotely, possibly leading to more search activity for video call apps such as Zoom, Hangouts, and Skype. Consequently, these developments brought about an increase in the visibility scores.

It is, of course, no surprise to see such an increase in the visibility scores. The interesting thing is how Zoom was able to boost its score more than the other two. Let’s take a look at the ASO Report to examine this situation on the keyword level.

When we set the time window as Mar. 5th – Mar. 27th to analyze the keyword rankings of Zoom before and after the visibility score increase, we see that Zoom has boosted its rankings to a great extent for some keywords such as “apps”, “free apps”, and “free apps for iphone”.

The keywords shown above are the most popular keywords that Zoom is ranking. Unsurprisingly, all the keyword phrases that contain Zoom’s brand name keyword have high search scores. Yet, ranking for too general keywords such as “app” or “free apps” which are quite difficult to rank for as indicated by the chance score is a great success for Zoom.

Let’s see what else has Zoom started to rank for by switching to the “Keyword Movement” tab.

The above list shows the keywords that have progressed and regressed most on the given dates. Top progression side gives some interesting insights. For instance, it seems that if you write “random app” on the App Store or “top ios apps”, you’re likely to see Zoom on the front rows while it would take you to go to the 88th app on March 5 to find it. If you go down the list a little more, you’ll see far more interesting keywords that Zoom is ranking 1st such as “awesome apps”, “great app”, “famous app”, and so on.

So, we know that Zoom is getting impressions from some keywords that were hard to rank for and it obviously contributes to the growth in its visibility score. Yet, its most popular keyword is still “zoom” with a search score of 98. Has “zoom” always been such a favored keyword? Most probably not 🙂 We can check Keyword Trends to find insights about it.

Want to discover the rest of the ASO Report of Zoom? Schedule a demo here to let us show you the whole data.

“Zoom” As a Trending Keyword

When we look at the last month’s data, we see that the keywords “hangouts” and “skype” had more or less the same. Yet, on March 13th, the popularity of “zoom” started to rise and surpassed the other two.

We also observe an increase in the search scores for “skype” and “hangouts”. Yet, Zoom seems to have beaten the others with its unrivaled search score of 98, which shows that people who come with the intention to download a video call app search for Zoom more often than they search for others.

Now we have an idea about how Zoom gets its impressions. But, going back to the Visibility Map at the beginning, we have another question now: “How come Zoom has fallen behind in the race in some European countries?” The issue could be related to the localization. Let’s check the Localization tool to see if that’s the case.

The Visibility Map tells us that Skype is more visible in France and Germany than Zoom. Could it be that Skype has localized title and subtitle while Zoom didn’t?

It’s indeed the localization issue. Although Zoom has a high ranking in its category, it hasn’t localized its title and subtitle in France and Germany. It might be the case that when people are searching for “Zusammenarbeiten” or any other related German keyword, they get to see Skype first in the App Store, which makes it more visible than Zoom. Let’s check which apps are ranking for that keyword to test this hypothesis:

It turns out that Skype is ranking 2nd while Zoom is nowhere to be seen in the Top 10 for this keyword. Once again, we see that a good localization strategy is a true game-changer.

We hope that Visibility Report will simplify your ASO efforts and guide you in your competitor analysis and localization strategies. As it gives a snapshot of an app’s overall standing in different countries in terms of visibility, it is a must-have tool for anyone who wants to localize an app!

Want to know how your app’s doing? Check out its visibility report now!