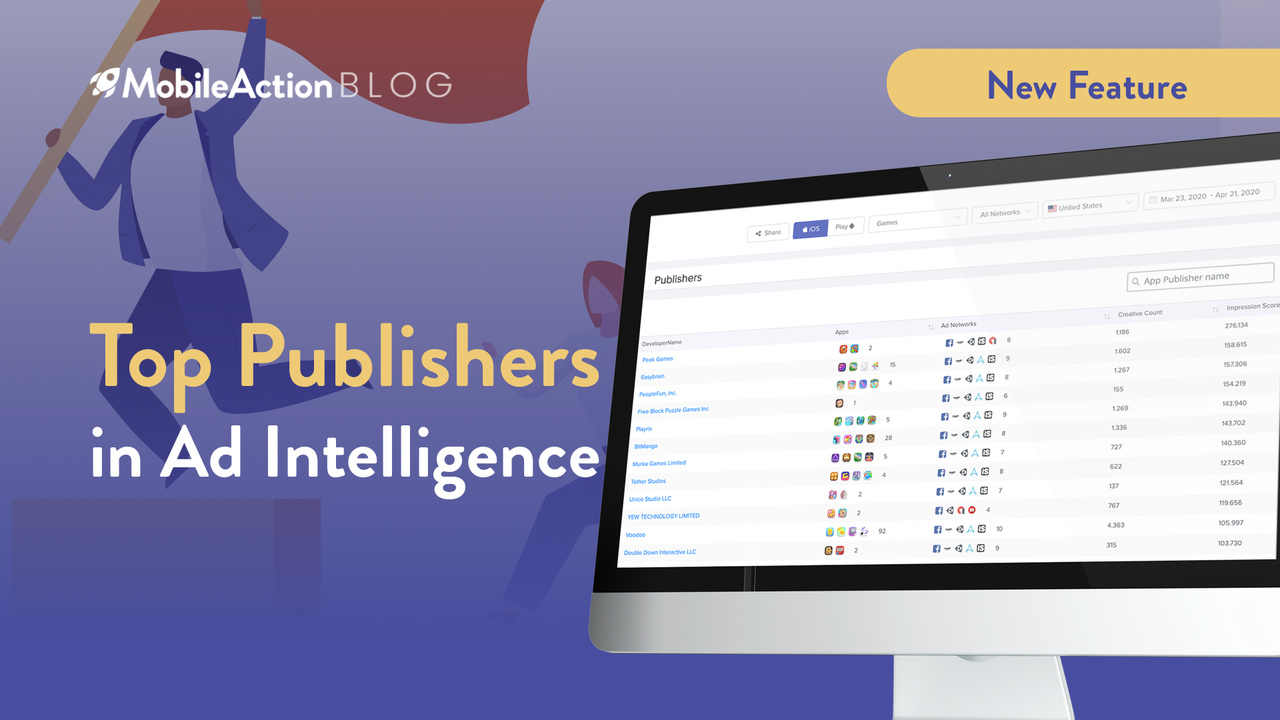 Are you going to publish a new app? Curious about which publishers run similar apps? Or are you curious about what ad networks your competitors are using?

We, as MobileAction, would like to introduce our new feature “Top Publishers” which will be especially helpful for app publishers. In Top Publishers you can get answers to all those questions we have asked above and more.

As you might have guessed, we are talking about a huge database. As important as the database is to have a user-friendly tool to handle the data. Our database covers more than 4 million creatives and the numbers increasing rapidly.

In the app world, the publisher is the one who provides space on their property to app developers and/or advertisers to run their apps or advertisements, and if an app is running its own ads while hosting others, it might be a publisher and an advertiser at the same time. App publishers who produce apps for both Google Play Store and the App Store can be analyzed with this new tool. Let’s go step by step through an example and uncover the capabilities of our new shiny toy. 🙂

Let’s focus on hyper-casual games, one of the big hits of the recent years in the mobile games space. As we all know Voodoo and SayGames are the two big players, who do an amazing job with the great games they produce. So, if you’re looking to publish your own hyper-casual game, there are great insights that the data of these publishers can tell.

When you pick a category from Top Publishers, you can analyze what kind of apps the publishers produced on the App Stores platform. Additionally, you can also sort them out by their Creative Counts and Impression Scores. (Impression score is the number counted each time your ad is shown on a search engine result page.)

Above we have sorted them based on their impression scores. Now let’s do it with the creative count.

In this main page, we can easily see (in games category or your chosen category) which publishers run ads for how many apps. As well as their ad networks. Along with their creative counts and estimated impression scores.

For the gaming category, Voodoo has the highest number of creatives for their ads.

Voodoo has 127 published apps total in the USA. Each line shows us the main data about each of Voodoo’s games. These are it’s; type (whether it’s an ad publisher or advertiser or both), Ad Networks (currently being used by the app to run its ads), category, creative counts for each game individually, and impression scores. The difference between Top Publisher’s page and this one is that all the data here is individually shown for each of Voodoo’s games. Whereas when we first entered Top Publishers we saw a more general view of all each publisher. Like Voodoo and not their individual apps.

As Voodoo and SayGames are both investing in hyper-casual games, this will be a good example of how you can use this tool to understand your competitor’s strategy and implement & revise it to your own.

When we look at the top 5 apps of Voodoo (according to impression score), we can see that they’re all both Ad Publishers (running ads) and Publishers (publishing ads).

When we compare the two publishers Ad Networks we can see that while Voodoo seems to have used more Ad Networks, they use almost all the same ones. Let’s look at their creatives now to see if they are doing anything different there or if they’ve taken similar routes for success.

By clicking one of the names of the apps, we can directly go over to its campaign analysis page.

Let’s first look at Voodoo’s top app, based on its impression score, aquapark.io.

In the campaign analysis page, we can get a more detailed look at the campaign metrics and creative information of aquapark.io.

Of course, we can do a similar sorting for Google Play Store too. We can select categories, networks, countries, and time frames easily here as well.

We can see all of the aquapark.io’s Ad Networks. It seems that they prefer to use Applovin mostly. If we look over to the right side we can see what kind of creatives it has used. (which is an essential strategy with game apps in general). We see that it has mostly video creatives while still giving images and of course, playable a good chunk. Playable is preferred with hyper-casual games as it gives the user a sense of real gameplay.

We can analyze SayGames’ campaign analysis in the same way. Since Voodoo was at the top when we sorted based on Creative Count in Top Publishers’ page, let’s now look at Voodoo’s creatives from the Top Creatives page.

From the Top Creatives page, we can type in the publisher’s name. In this case, we typed in Voodoo. You can select the time frame, the country, the app store, as well as the media type. Now let’s add some of Voodoo’s top creatives into our other new feature, “Creative Collection”.

Got curious and want to try it out for yourself? Schedule a demo with us!

Once you have created a collection of your competitors’ creatives to your standards, you can make it specifically video creatives. Or however else your heart desires. You can easily access this without having to pick through every single of their creatives again. And don’t forget that you can add and remove from your collections any time you want.

Like in the Top Creatives page, in Creative Collection, you can see all the details of the creatives you’ve saved here. What apps the creatives appear in, what Network was used, whether they’re still active creatives, and so on.

Ad Networks can be used as a lead generation tool. For app publishers;

If you do a throughout analysis, this tool will be your right hand in taking steps towards getting ahead of competitors.

The most important thing with analyzing ads is being able to track the top publishers in real-time. Knowing the best ad networks to work with and the top advisers. Also, being able to track your current and possible competitors’ every move regarding these scenarios, can be game-changing (no pun intended 🙂 ).

In addition to the existing analyzing tools, the newly created Top Publishers and Creative Collection are filling a big gap and being a huge help for app publishers who want to succeed in the competitive app world. As we have seen above together, what you can get out of these new two tools is only limited to your imagination.

We hope our blog post will be useful on how to use this new tool for your ad analysis.

Interested in our Ad Intelligence product? Schedule a demo with us to try all the features!

« Top 10 Fitness Apps Worldwide for March 2020
How Do App Reviews and Ratings Affect Your ASO Strategy? »