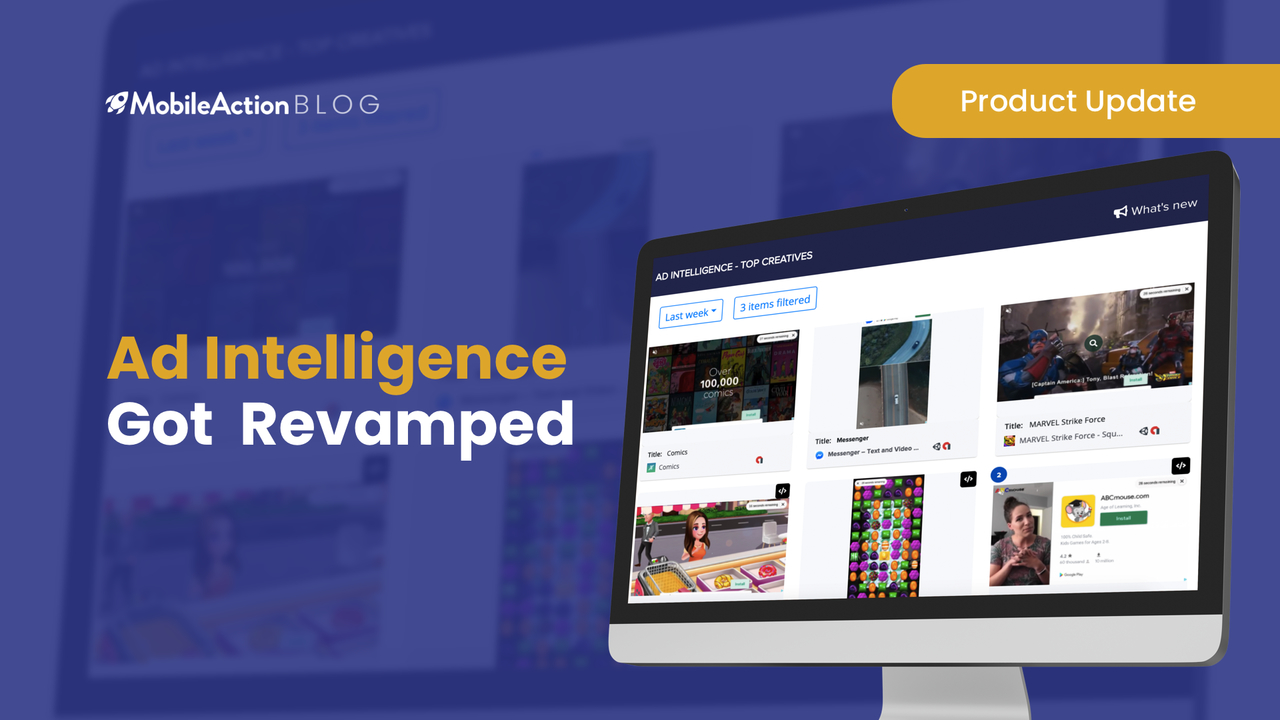 In-app ads are the fastest way to get more downloads and increase your category ranking. Especially, if you have an app in a very competitive and volatile category such as Games, you probably know that investing in in-app ads is no longer an option.

Yet, without the right tools and reliable data, it is quite difficult, if not impossible, to get a good ROI in this arena. For this reason, we made Ad Intelligence where you can discover all the creatives of your competitors and access to crucial metrics of their campaigns to create the most engaging ads possible.

Upon hearing your feedback and requests, we have revamped our Ad Intelligence solution and enhanced our data along with some great updates.

We’ve started to track 5 more media types in addition to the image, video, and playable, and now adding 6x more data from ad networks to our database. Not only have we increased the quantity of the data, but we have also boosted the variety. And now, we are able to catch an average of 3,000 new creatives every hour.

Which media types are available?

When a user sees an in-app ad, almost always, it comes as a composition combining many elements. Think of the last time you were playing a game. After completing a level, you click on the “Watch ad” button to get some kind of an award.

As soon as you click on it, the full-screen ad (interstitial ad) comes in. At the same time, a banner appears at the top with a button (banner ad). A video in the middle starts to play and a countdown also begins. After 30 seconds, an interface similar to that of the advertised game appears and prompts you to play with it (interactive).

And finally, since you earn something for watching this ad in the game that you are playing, this whole ad is a rewarded one.

In the ad composition we described above, there are actually 5 different media types. As a UA  Manager, you can come up with a lot more different ad compositions such as interstitial, video, and end card (images or screenshots at the end of an ad) or interstitial and carousel.

Now, you’ll be able to filter all these 8 media types in Top Creatives and Campaign Analysis pages of Ad Intelligence. Not only that, but you can also combine different media types for different apps and see how your competitors leverage these media types.

To show you an example, we filtered out, rewarded, interstitial, and video ads for Android in the US in our Top Creatives page:

And we found some really interesting ads. Let’s see an example of one of the most popular ads from Marvel:

Have you realized that you view it just as you would view on your phone? As it’s an interstitial, it opens up on a separate pop-up on the dashboard, and you’re able to see all the elements of the composition such as the banner with the install button and the countdown. Now, you’ll have a better idea of how they combine different media types to engage users to get them to download their apps.

Now, let’s see something more fun, an example of an interactive ad:

For arcade or hyper-casual games, interactive creatives are usually the best choice as these types of ads successfully showcase the ease of UI and let the users experience it first hand. You can filter out all the popular ads of your category this way and see how UA Managers make use of their demo game to attract more users.

A friendly warning for the interactive creatives: You forget about the time when researching (or playing) other apps’ interactive ads. So use this filter of Ad Intelligence at your own discretion 🙂

Multiple Versions of the Same Ad

We often see that same ad composition is used in different countries with minor changes such as the language. With this new update, we combine all these similar ads under one group and show them to you as one creative like below:

This creative of Gardenscapes, one of the most popular games of Playrix has 169 versions, but essentially they’re more or less the same creative. So we group them to save you time in your analysis.

Are you asking “How about I want to see the different versions?”? Easy! Just click on the ad the creative in the Campaign Analysis. Using the arrows on the top left, you can navigate between different versions of that creative.

This update will enable you to do the creative analysis for any app more quickly since you won’t be dealing with the same ad creatives one by one, but see them as a group instead.

Hope these fresh updates will ease your competitor analysis in paid user acquisition end. Your feedback is always the best source of inspiration for us! So let us know your comments through the chat on our website.

Looking for a tool to spy on your competitors’ ad creatives? Schedule a demo with us to see all the features of Ad Intelligence.

How the Coronavirus Outbreak Affected the Ratings & Reviews…