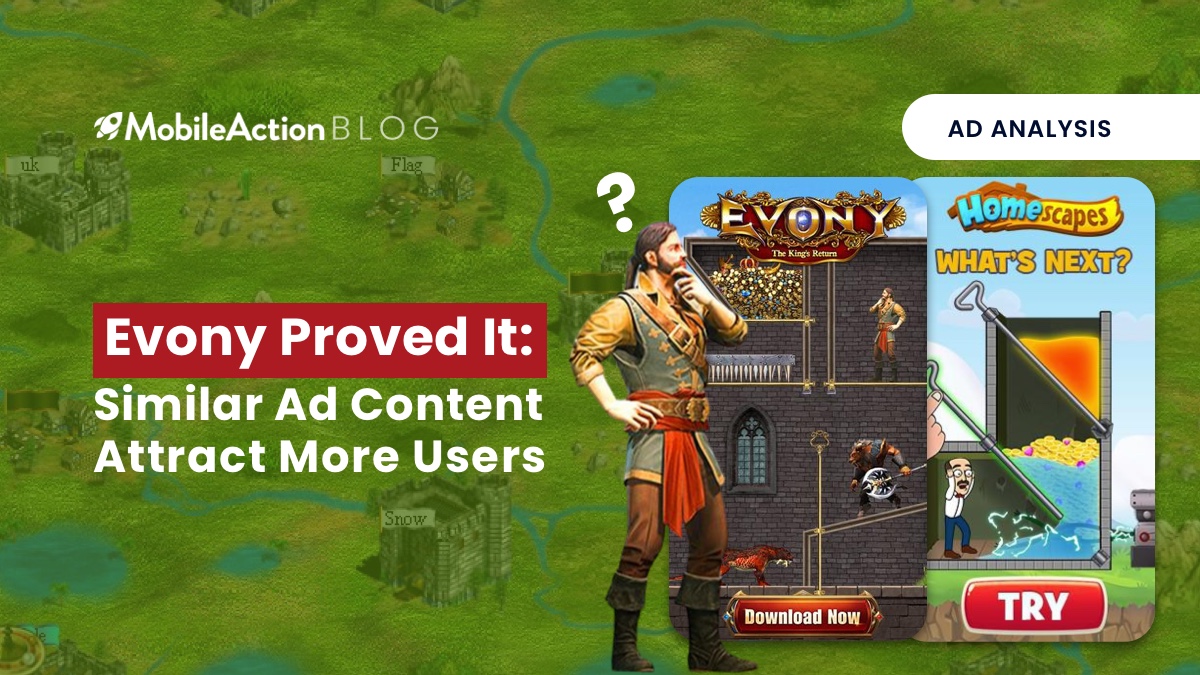 Among other marketing activities, ad creatives play one of the most important roles to promote an app. The reason is very simple: Ad creatives make the first impression to the users and make the first click after watching a video, seeing an attractive image or playing some interactive ads.

However, it takes plenty of time to find the most successful ad creative in your inventory since you have to test each of your ad assets and wait for the results. Plus, it is extremely costly to find the best-optimized version of the creative since you pay for these ads at the end of the day.

But, if you have an Ad Intelligence technology that uncovers the Top Creatives, you can simply reveal the high-performing ad creatives in any category. Moreover, it doesn’t only uncover your competitor’s ad campaign strategies to shape and strengthen yours but also it helps to create new game ideas and unique in-app features that you can use to build on your games. And this is what Evony did for its strategy.

Evony is a strategy game in the App Store ranking 4th among Top Advertiser apps this week. The interesting part of this game is that it doesn’t only use similar types of ads like Homescapes but also brings these ads into a reality where users can play them as a part of the game. It was ranked 62nd in September, 18th in November, 10th in December, and this week, they are ranking 5th in Top Advertisers, which means that they are quite successful in what they’re doing in terms of getting impressions and most probably, downloads.

If you haven’t seen this blog post about Misleading Ad Strategies, you should definitely check it out before reading this article.

According to last week in January, as we can see in the picture, Evony has received an impression score of 377,260 and published 577 unique ad creatives. When we dug more, we saw they’ve published 2693 ad creatives in September, 1161 in November and 950 in December.  It seems that they’ve started optimizing their ad creatives in terms of content, media format and even the ad networks they utilize since the number of  the creatives started decreasing over time. Let’s dive into the Campaign Analysis section to see what kind of insights we can get.

We can say that their ad spend is quite high as they try lots of ad creatives in different media formats and in different ad networks. In September, Evony was using only 8 Ad Networks.

Since then, they’ve been using mostly Admob and Unity as their Ad Networks. However, they’ve started spreading their ad creatives to more channels by adding new ad networks like Tiktok, Ironsource, Applovin, etc. and removing the unsuccessful ones to optimize their campaign strategy.

The interesting part here is that even though they’ve been spreading the majority of the creatives to Admob until now, Unity was bringing the most impressions with over 80%. After recognizing this at the beginning of January, they’ve started to spread their creatives mostly on Unity with 34%.

Moreover, they’ve been publishing their ads in 10,838 different apps this month, which is a quite competitive number when compared to other apps in the Top Advertisers section. To give you a better idea, Toon Blast, which is one of the most popular puzzle games, has a 17k publisher count.

Furthermore, the change in the distribution of the creative formats is also interesting to share. In September, they were using 24% image, 50% video and 25% HTML of their total creatives.

However, it seems that their HTML format creatives weren’t as successful as other formats since they decreased it to 9% and increased their image creatives to 41%. Unlike other game apps, they don’t focus on interactive ads too much – they’ve been using less than 1% playable creatives since September.

Today, Evony uses 15 different languages in its ad creatives including English(58%), Vietnamese(11%), Thai(9%), Spanish(3%) and so on. Their ad creatives are spread mostly to the United States, Japan, Vietnam and Israel. As we can see through these insights, it is right to say that they are focusing enough on localization to increase their click-through rates.

These two ads above are Evony’s and Homescapes’ best-performing image creatives in January in the United States. As you can see in the picture, the general idea is the same on both ad creatives!

Homescapes’ ultimate goal is to be noticed, and we can understand that their ad creatives are performing really well since it’s first seen 351 days ago and it’s still active. The more attractive your ads are, the more clicks your ads get which converts in downloads. Evony was aware that Homescapes has been seeing benefits from its ads strategy – so why not using the same strategy to acquire new users?

Competition in the app world is being tuff each day. That’s why finding the high-performing ad strategies is extremely crucial not only to reduce the learning cost but also to attract more users to increase downloads. Curious to see more ad strategies to apply to yours? Let’s schedule a demo to start your journey with Ad Intelligence.

« App Store Optimization Best Practices for 2021
What Happened to the Robinhood’s Ratings? »