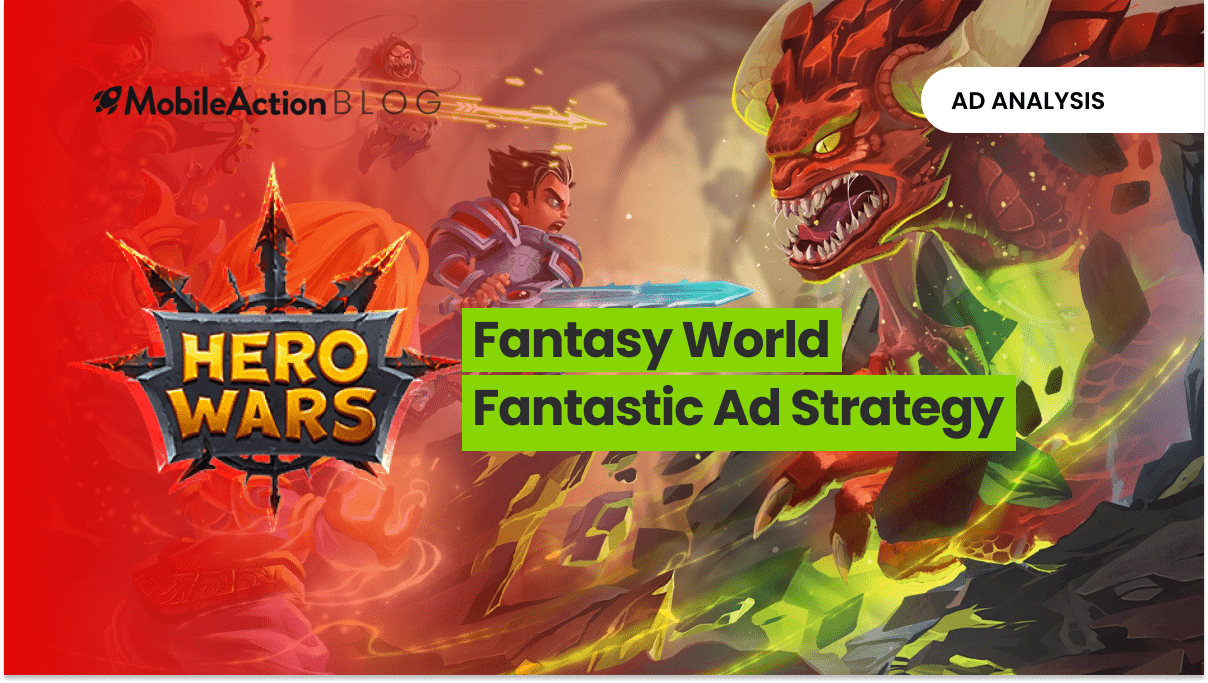 Hero Wars Fantasy World is moving swiftly up towards the top of the top advertisers’ list. How are they doing this? Hero Wars is targeting 50 countries total and is ranking number nine in overall advertising. Released in 2016 it has this year upped its mobile ad strategy. Let’s do an ad analysis to see what we can learn from them.

Hero Wars – Fantasy World can be considered an adventure game or role-playing game in the App Store. In the Play Store, we can see that it is in the Game Role Playing category. In this game, you can rise through the levels, acquiring new armor, characters, and unlock more things to do and abilities.

Published by Nexters Global LTD, the game has been up since 2016 which is an impressive feat for an application in this category. Let’s take a deeper look into the strategies used to acquire and maintain its user base over all these years.

Hero Wars is currently 7th overall in advertising. They have creatives on 12 networks with a large emphasis on Admob. This demonstrates, that they currently have chosen Admob as the best ad network for mobile games. However, this is something that can change significantly between apps and month to month. It is important to keep an eye on where you are getting the most traction in terms of mobile app ad networks and to adjust your spending accordingly. When you are considering how to market an app the number one thing you need to do is continue to adapt. The climate is always changing and you must stay up to date.

Their total creative count is just over 2,000 and their active creative count is 789. This may seem like they are still running half of their creatives, but, if we look back only a couple of months ago, the app had closer to one thousand creatives total. This indicates that they have recently started implementing a new campaign strategy. It also indicates that they have tested and removed several creatives. Hero Wars – Fantasy World gives developers a great opportunity. This app is doing a lot of testing surrounding which types of apps work, with a huge volume of ads.

Their ad publisher count is an astounding 17,004. This means that if you have a similar app, you might want to look at where they land with their creative strategy and model your own after this.

We can also see that they have learned a lot about Html ads and video ads, with fewer still images and even fewer playable creatives. It is a great idea to keep an eye on this app as it continues because they are consistently testing things and changing their strategy to be more effective.

To illustrate what we mean by “rise to the top”, let’s take a quick look at Hero Wars – Fantasy World’s Category Rankings.

Hero Wars is not currently in the top 10 games, nor is it currently in the top 10. However, this game has managed to stay in the top 100, and usually the top 50 for a long period. For a category that is so turbulent and competitive, this is an impressive feat. This game uses a tenacious advertising strategy to maintain its spot as a relevant and well-liked adventure game. Let’s look into this ad strategy to see what Hero Wars – Fantasy World does to maintain this status.

Hero Wars targets Taiwan, Russia, and South Korea the most with their advertisements. They have many ads running across many applications and tend to follow a few certain styles of creatives.

However, the majority of their creatives are in English. Why would this be? Well, for a start, the majority of their creatives do not lean on language to show meaning. Secondly, they follow the convention of other mobile game creatives. We discuss exactly what those conventions are presently. However, for now, we can also observe how the other languages that this app is targeting may look very different from English visually. The words in the name of the application are very commonly known and recognizable to those who are not necessarily English speakers. Words like “Hero” “War” and “Fantasy” can be recognizable and memorable as they are prevalent in many popular mobile games. Especially mobile games within the genre.

So what are these carefully crafted advertisements? How do they both follow the conventions of the genre and stand out amongst the other similar creatives to engage new potential users? These creatives cleverly use the same font and color scheme of many popular games of the same genre. The game also includes aspects of puzzle games and level unlocking so that they can truthfully include these in their advertisements.

Let’s elaborate on this.

The visuals of this game are 3D and look like this, the game has great graphics and is made in the style of several other RPG and Adventure games made for mobile.

However, some of the quests that you can encounter in this game look like the puzzle game ads so famously advertised by Homescapes for example.

They also have a tower progression mini-game inside of this game as well. The inclusion of mini-quest games inside of the larger adventure games allows this app to stay relevant and attract new users who might be into a certain type of casual game that is popular at the moment, without sacrificing those who enjoy the adventure game side of things. They can target different creatives towards different types of users and deliver on all of those promises.

The game motivates you to continue playing in the same way that it draws you in in the first place. You are promised variety, progression, and the capability of leveling up and unlocking new characters, armor, and levels the more you play. The game rewards you for continuing to interact with it in a way that keeps you hooked. Even if you don’t reach the level you saw advertised when you first start playing, you anticipate that level and continue.

What To Learn from Hero Wars – Fantasy World

This app has a huge number of creatives and is constantly tweaking its strategy to keep up with the times. We can see this with:

To keep a close eye on what Hero Wars will do next, and to see the long-term results of their most recent campaign, sign up for a demo.

« Top 10 Advertising Apps March 2021
Apps That Are Publicly Traded: From Idea to IPO »