Blog How to Combine UA & ASO for Mobile Growth? 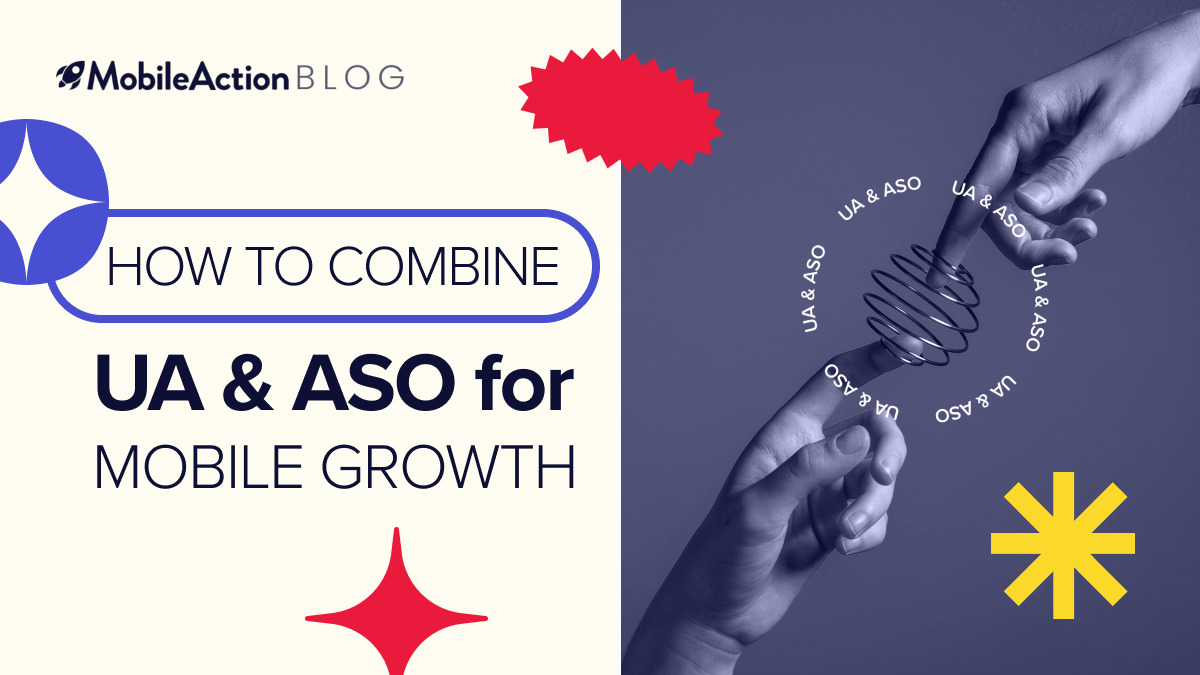 Many companies consider paid user acquisition (UA) and app store optimization (ASO) as two separate teams with separate agendas, and mostly they are unaware of each other’s work. Despite this conventional wisdom of mobile user acquisition, both serve the same purpose: to drive higher conversion of quality users in a sustainable, yet scalable way while advertising your app. This being the case, why should they be analyzed and evaluated independently?

To increase your app’s visibility, generate higher-quality installs and users, and eventually contribute to overall mobile growth, you must set a course for combining paid UA and ASO into your marketing strategies. Still, building up such a strategy for your app and implementing this into your marketing efforts can be more tricky than expected. You may run into many difficulties, such as keeping ROI high whereas CPI low, finding out the paid actions that stamp on organic results, and the risk of cannibalization.

As you can see, it won’t always be all beer and skittles to spur on paid UA and ASO teams to work together, but building a holistic mobile growth strategy is crucial for your business’s long term goals. Then, how can you, as app developers and marketers, leverage paid UA and ASO most effectively to draw both to your advantage?

The Correlation between UA and ASO

While leveraging your paid UA and ASO efforts, the first step is to conceive of the correlation between them, such as how they act upon each other.

When it comes to growing your app, one of the most common issues is to figure out how to drive more organic traffic into your app. Considering organic installs are associated with lower acquisition costs and often higher retention rates, it is the be-all and end-all for any company to focus on ASO in order to grow and position itself on app stores.

Paid UA is necessary to raise awareness among new users or announce new features, as well. Paid app downloads increase organic downloads by 1,5 times on average, and this increase can reach over 17 times in some categories. By means of this complementary relationship, it is vital to keep your app store listing optimal in order to acquire fresh users driven by your ads.

At the end of the day, your install volume is the first indicator of your app’s category ranking, which eventually has an impact on your browse performance. At this point, it is essential to understand the actual impact of the UA – ASO funnel.

Your cumulative install volume impacts the category ranking of your app or game, which has an impact on browse performance, as well. While your app ranks higher resulting from installs, you are apt to receive more installs from browse, and accordingly, your presence scales up in app stores.

The Impact of UA on ASO

Paid UA is the practice of paying to promote an app in order to drive traffic to your app store product page. When you take an ever-increasing number of apps available in app stores into consideration, you should set your shoulder to the wheel to stand out. In case your app doesn’t pop out in search results organically, the best option is to pay for this traffic to your app in order to get off the ground. You should also be able to get sight of an increase in organic traffic once you have accomplished that increase in traffic and paid installs. That increase in organic traffic leads to another increase in organic installs resulting in enhanced app store visibility on the whole.

Paid UA is also a popular choice for especially newer apps running ad campaigns centred on branded and high-search-volume keywords to drive more installs. It has such a potential for organic strategy, considering that users are exposed to your brand through the keywords of your paid UA and may later search for it. Eventually, this leads to a substantial enhancement in the organic presence of your app and encourages organic installs to your app. This type of traffic will be applied to organic search in app stores, notwithstanding users were initially exposed to a paid ad.

As you all know, one way to build up and enlarge upon brand recognition is to add value to your users by establishing meaningful connections via mobile ad creatives. Users are more likely to resonate with an ad if they can relate it to your brand, so the ad should be consistent and relevant to your brand identity.

Let’s take Spotify as an example.

Spotify carries out its branding efforts in paid UA consistently in terms of the colour and design of its brand identity. As you can see from the screenshots above, the colour palette they use in their ad creatives corresponds to the colour of their app icon.

The example above gives a point to the meaningful correlation between UA and ASO; still, this isn’t always straightforward to differentiate and attribute without a grasp of the impact of ASO on UA.

The Impact of ASO on UA

ASO is the practice of boosting your app’s visibility in app stores with the aim of increasing installs and conversions for your app. According to Apple, the users searching for a specific keyword on the App Store account for up to 65 per cent of all app downloads. This rate demonstrates that if you aren’t putting effort into ASO, then you are missing a golden opportunity to be discovered through high-quality users.

Your app store product page is highly essential because every user coming through the store to download your app will eventually end up on this page regardless of where they are coming through, such as organic search or paid ads. And so, to increase your conversion rates and lower CPIs for your ad campaigns, it is key for you to optimize your app store product page strategically.

The Role of Apple Search Ads

Similar to ASO, in iOS app marketing, Apple Search Ads also helps you to reach out to high-quality users, and at the same time, boost your app’s visibility through bidding on the keywords which are normally hard to rank organically.

To exemplify, as you can see below, the app derives impressions from bidding on the keyword “womens clothes” even though its organic ranking for this keyword is relatively low.

With the combination of organic strategy with Apple Search Ads, you put bidding and paying for a user who would have installed your app organically on the line regardless, which is called cannibalization. This scenario generally takes place when you are bidding on a keyword, typically brand keywords, for which you are already ranking 1st organically in app stores. Supposing that a user searches for your brand name and finds your app in the top two positions, one of which is a paid ad and another an organic search result, that may sound implausible to spend the money on the paid.

However, this would be essential to appear in that paid position despite having to pay for the clicks considering one of your competitors could be bidding on your brand keywords and appearing there instead.

The first app below has a higher spend and organic rank for the keyword “money management” with lower bids compared to the other app. As you notice, the organic ranking of this app for this keyword is 24 and is still increasing.

The second app below has a lower spend for the keyword “money management” than the previous app, but with higher bids, and for this keyword, this app doesn’t have an organic ranking.

Commonly, it is thought that higher bids are supposed to win the auctions. However, this isn’t the case here. Upon searching for the reason behind this, we see that the first app spending on the keyword “money management” with lower bids has used this keyword in its app metadata, whereas the second app hasn’t.

Especially for the popular keywords, organic rankings are very important because Apple Search Ads puts emphasis on relevance. For this reason, in some cases, even though its bid amount is lower, the app whose relevance is higher is most likely to win the auction. In this case, for the keyword “money management”, the first app whose organic ranking is higher is more likely to be tapped. And the second app cannot spend up, even if its bid amount is higher.

How to create a user funnel by leveraging UA and ASO?

Now that you are mindful of the prosperities of combining ASO and UA into your market strategies, the rest is the implementation of this combination, which is optimal through cohesion.

Upon running a paid ad campaign, you should organically emphasize something remarkably akin or identical to this campaign on your app product page. Along with strengthening communication and transparency with your users, a cohesive message conserved throughout the whole user funnel scales up conversion rates and, as a result, ROI.

Paid UA campaigns aid you in driving lots of traffic to your app store product page. With a proper ASO strategy, you ensure that users encounter with such assets there that are designed and optimized to drive more installs. While you convince them to click on your ad with a promise through paid UA campaigns, you should meet their expectations when they land on your product page through optimizing this page to reflect on what you show in your ad, creating a consistent user experience from impression to product page, and install.

Once users have what they have been actually promised, they will put more faith in the ads they are coming across with. And ultimately, this faith will pave the way to increased conversion rates.

We believe that this article has tossed out some ideas about why you should consider paid UA and ASO as a whole and forward a cohesive message to your users through coupling them up. With millions of apps in app stores, you need to bring users on to download your app. The competition is fierce, but the best way to drive your app to the top is to combine paid UA with ASO.

Each UA and ASO is a central pillar of marketing. This being the case, app developers and marketers who manage to combine the two in order to form up a holistic strategy will step forward. If you have any questions in your mind, or if you would like to dig deeper into comprehensive strategies about both paid UA and ASO, schedule a demo with our experts. We would love to talk to you!