Blog Ad Strategy of Royal Match: The Secrets of Becoming a Top Advertiser

Ad Strategy of Royal Match: The Secrets of Becoming a Top Advertiser 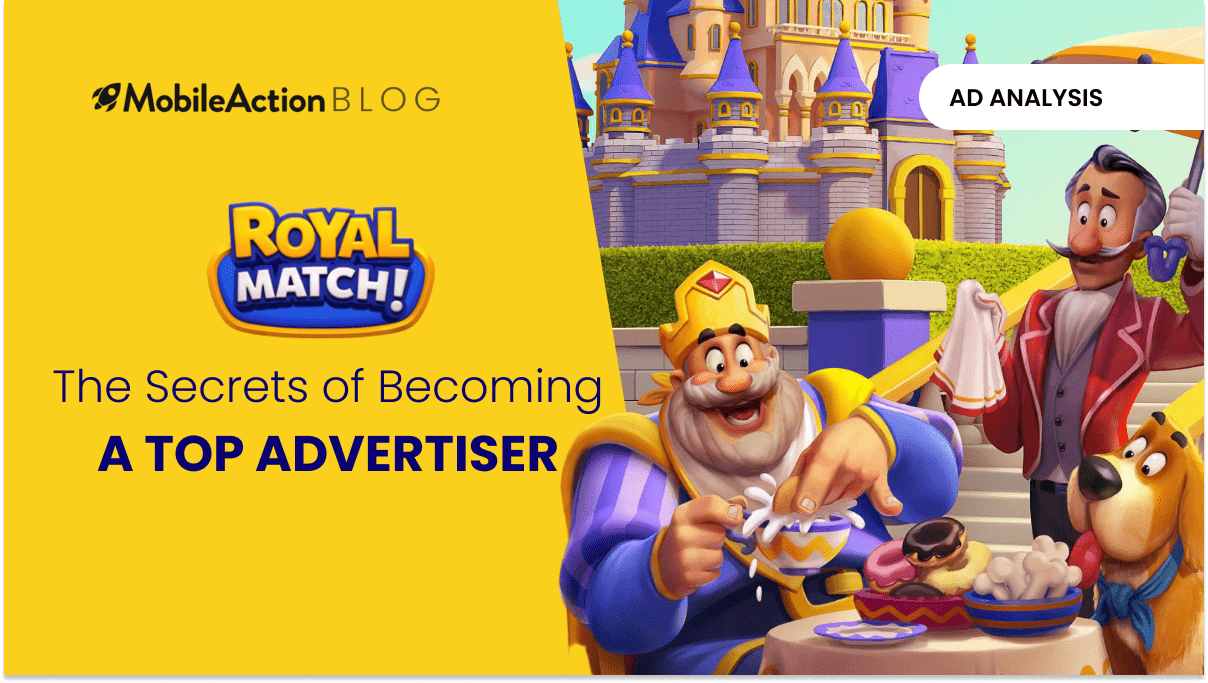 The right ad strategy can put your app on the top charts very quickly. In today’s article, we will discuss an app that achieved just this. The ad strategy of Royal Match was a comprehensive one, utilizing different tools to find its place amongst the most popular mobile games.

For  mobile user acquisition, along with a good app, you also need to know how to promote an app. Using mobile Ad Intelligence, we will examine the ad strategy of Royal Match and gather insights about an effective app user acquisition strategy.

Even though Royal Match was released in late February 2021, it did not take long for the app to reach respectable category rankings. Only within a few days of release, the game was ranking near the top within its categories.

Perhaps the bigger success is the fact that they have been able to keep up their popularity, and not lose much of their rankings in the following months. Now let’s start going over the ad strategy of Royal Match.

So how do we know Royal Match is using an aggressive paid growth strategy? We can simply use the Top Advertisers tool to filter apps according to their impression scores.

Apps in the top advertisers list push more creatives compared to others. These aggressive strategies allow them to reach a much larger audience allowing them to boost app download. Thus, looking at the Top Advertisers lists and taking a look at how these apps structure their advertising campaigns can be an excellent way to start building your own strategy.

It is easy to see that Royal Match is not only active in the App Store, but also in the Play Store.

In the App Store, Royal Match is the Top Advertiser across all categories and apps for April 2021, which is surely a tough goal to achieve. Top War used to be the top advertiser of the game category.

In the Play Store, Royal Match is ranking 23rd across all apps while ranking 10th amongst games in the Top Advertisers list as of May 2021.

Through Campaign Analysis, we can quickly get an overall understanding of any app’s mobile user acquisition strategy.

Starting with mobile ad networks, we can see that Royal Match distributed its creatives through 14 channels. Admob and Unity seem to be their primary choice followed by Facebook distribution channels.

Finally, we can see that the creative format distribution is one that we would expect from a casual game. The Ad strategy of Royal Match mostly includes videos followed by image creatives. There are also a small number of playable creatives.

Now that we have an understanding of the overall paid efforts of Royal Match, we can take a look at their actual ad creatives to understand their creative strategy.

Starting with an image creative, we can instantly see that the app uses vibrant and playful colors to create attractive images. We can also see that for different locations they localize their ads from this pair.

When it comes to their interactive ads, it is easy to say that the ad provides a very comprehensive experience of the game. With shining colors and colorful effects, users are basically able to play Royal Match in other apps.

Perhaps you noticed that Royal Match shares a lot of characteristics with Toon Blast, another popular match game. In their video creatives, we can see that Royal Match includes elements that put together strategy, arcade and puzzle game components. Perhaps this can be an attempt to differentiate their creatives from those of Toon Blast, spreading brand awareness.

Our claim is also supported by their App Store Optimization strategy. With our Keyword Intelligence tool, we can see that they get nearly 23% of their organic downloads from the brand keyword of their competitor.

Royal Match is running Apple Search Ads in 5 countries. In the US, they are bidding on 4,525 keywords.

Because match games are so popular, generic keywords are important for such games. These keywords allow apps to capture users who are not searching for a specific app, but rather a specific kind of app. We can see that Royal Match is bidding on many different keywords that include the term ‘match’, and getting impressions from them.

It seems that Royal Match can increase its Apple Search Ads efforts more in the near future, especially by spreading to different regions. Meanwhile, if you would like to know how to set up your mobile ad campaign in a data-driven way, schedule a demo with our experts and start climbing the ladders of the top charts!