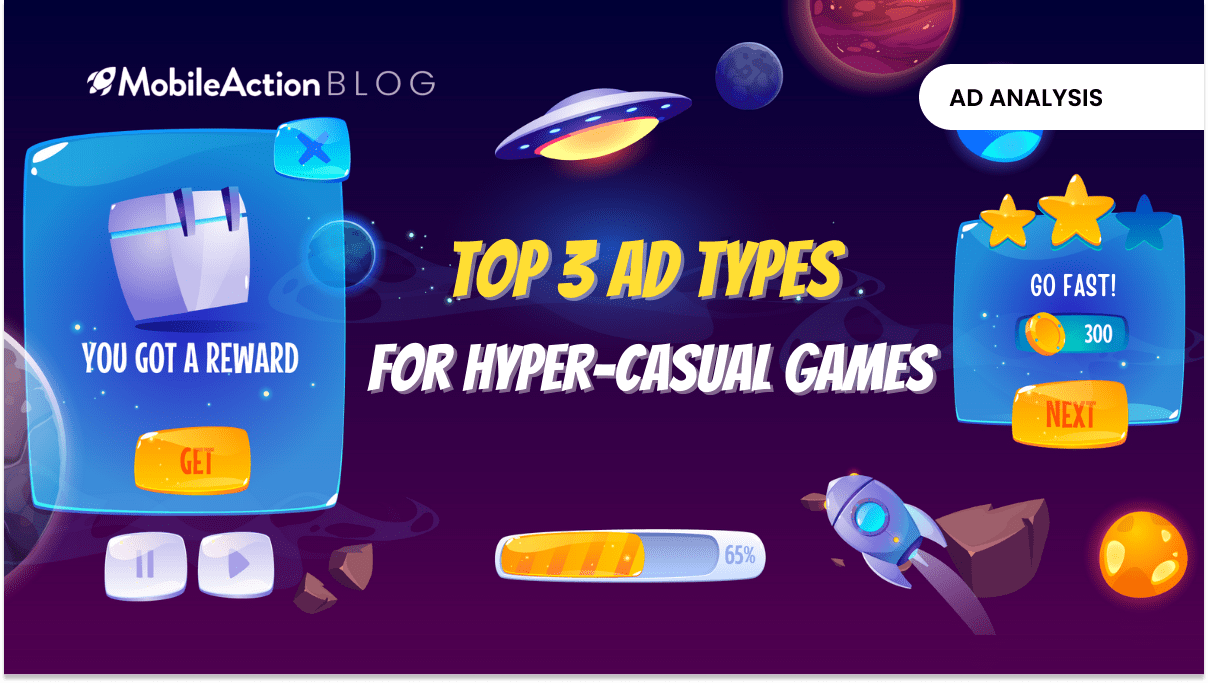 From Rovio to Voodoo, the influence of quality ad implementations on successful game monetization can be seen in the stories of casual and hyper-casual games.

If you want to optimize paid growth efficiency, regardless of your game type, you need to focus on the right formats and strategies. For hyper-casual games looking to extend their user base through advertising, we’ve put together some tips and suggestions in this article.

Hyper-casual games must rely on strong ad creatives for user acquisition because mobile game ads are critical to their survival. And, since one of these games’ distinguishing features is their simplicity and ease of play, how you interact will make all the difference. To put it another way, the creatives must be able to tell a good story.

Although technology evolves at a breakneck pace, human needs and desires remain largely unchanged. This is where psychology comes into play: you can get your ad creatives to outperform the competition by using “hooks.”

As a result, you can use user ratings and reviews as selling points for your creatives. Another strong motivator in the herd effect is the fear of losing out!

Down below we see “ads” in the most mentioned keyword tab of MobileAction’s Reviews feature for Helix Jump with an overall star ratio of 3.22, not bad at all!

The Most Popular Types of Advertisements in Hyper-Casual Games

Through using MobileAction’s Ad Intelligence tool, it is possible to analyze best working ad creatives with comprehensive coverage of 25M+ creatives. Let’s have a look!

Hyper-casual games are primarily monetized through advertising and in-app purchases. Since various techniques are used in mobile app ads to attract customers, some ad formats perform significantly better than others. We compiled some of the most common formats served inside top hyper-casual games:

Banners appear in nearly every hyper-casual game. Few years ago, banner advertising was used less often. It does, however, fit well in a hyper-casual environment and produces a significant amount of revenue.

Banner advertising can be useful for users who do not deal with rewarded video ads because they only take up a small part of the screen. This genre includes sticky banner ads and native banners, which can be effective when paired with other ad formats. Banner advertisements are also a good way to monetize gaming apps. Especially in portrait mode since they are less likely to disrupt the game.

For watching a rewarded ad, the player usually receives a bonus. By pressing the appropriate button, the player selects the video to be shown. Since these types of mobile ads cannot be skipped if the user wishes to collect their prize, it can be very useful in hyper-casual games, benefiting both the app developer and the advertiser.

Players have more control over their experience with rewarded footage, which gives them an in-game incentive for watching an ad.

An interstitial is an ad that you can skip after a few seconds of viewing. Since hyper-casual games are played in loops, some ad formats that would be disruptive in other gaming genres work well in hyper-casual games.

Video interstitials and playable commercials, for example, are common in hyper-casual games since they are served in between or during games, often when a player loses a few lives. Playables, in particular, will keep users entertained as they wait for the next round to start, ensuring that the user experience is not disrupted and app publishers make the most money.

What Matters the Most When You are Creating an Hyper-Casual Ad Creative:

Playable advertisements work better in hyper casual games than standard video ads. In reality, playable ad CTRs are extremely effective. Not only that, but there are a range of customizable elements that can assist you in fine-tuning playable advertising for better ROI.

Let’s take a look at important points in creating successful ad creatives and hyper casual game publishers that managed to do that!

Even hyper-casual games considered simple & quick games compared to other types, still, UI/UX matters a lot. The looks, location, and color of the video playback button.

The more valuable the offer, the more likely people are to watch the ad. Specially designed game mechanics for awarded videos. Most mechanics in hyper-casual games are designed for extra monetization, including those involving rewarded ones. When creating a mechanic, you will determine how to monetize it ahead of time. Players can, for example, watch ads to gain access to certain challenges or in-game rewards.

Give clear instructions in the ad and simplify the gameplay. A creative should have a specific target and a good pace if users get confused even in the ad, offer help!

A/B testing is critical. As we see down below Homescapes by Playrix advertising in more than 10 different mobile ad networks. There is also a gap between their creative count and active creative count which shows us they are A/B testing and experimenting a lot. It takes a lot of iteration!

Ad creatives can experiment with various themes or skins, complexity, then evaluate the findings and iterate based on season, target audience, geographical area (country).

Overall, the hyper-casual market is expanding, and with it come new problems for publishers. It’s critical to stand out in an increasingly homogeneous industry. This is where well-executed ad creatives can make all the difference.

UA campaigns can be taken to the next level by hyper-casual developers, resulting in a significant return on investment. Know, if you’re going for playable ads, take advantage of their customizability. Tweak them with data before you reach the sweet spot.

Contact us to clarify your data requirements and to learn how we can assist you in locating your sweet spot!

To get started with our mobile Ad Intelligence, schedule a demo with us!