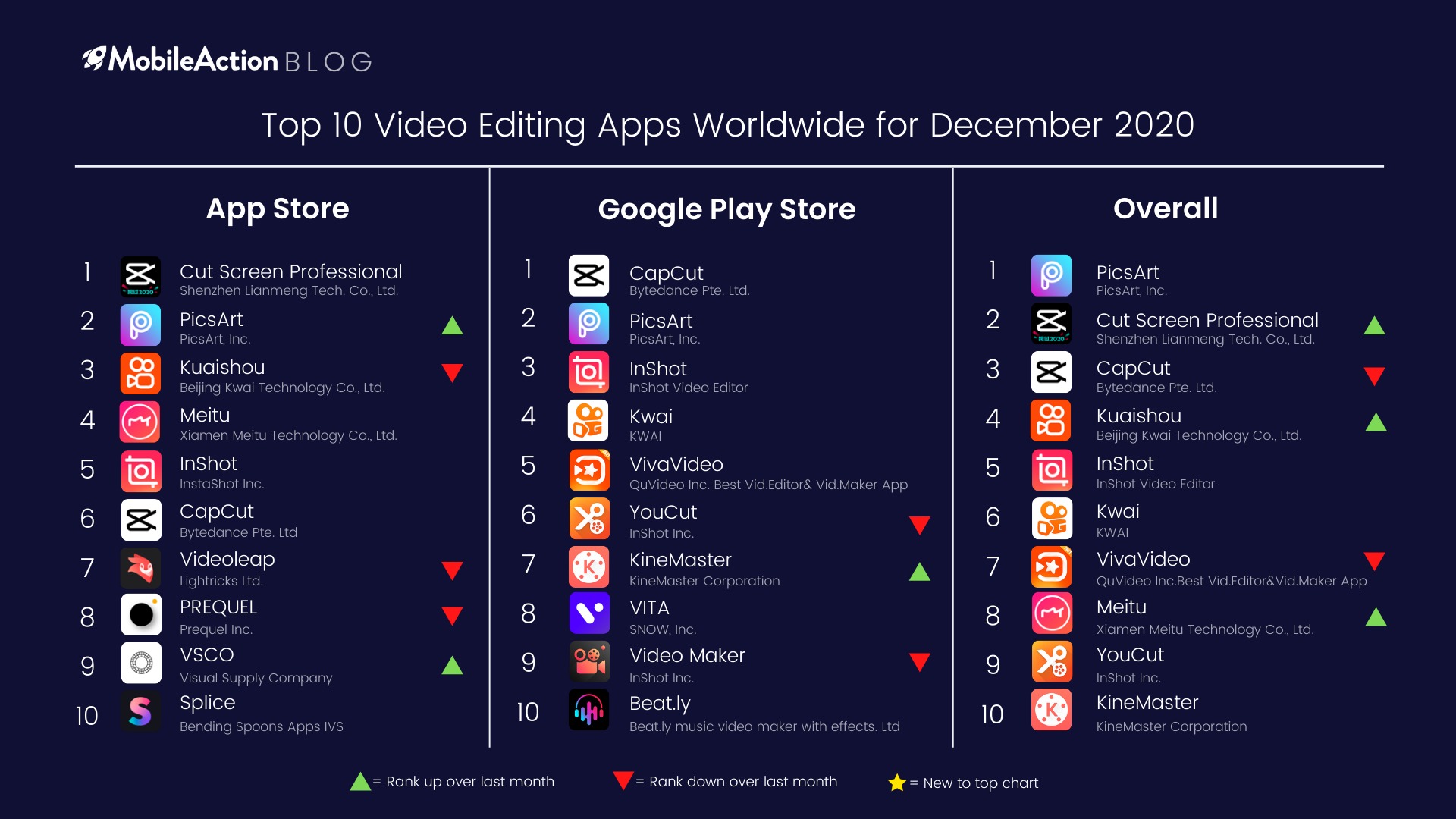 Video editing apps are a rapidly evolving type of application. Though there has been a demand for them for over 10 years. (iMovie being introduced in 2010). They are constantly adapting to meet the needs of the platforms displaying videos that rise and fall in popularity. The trends and norms of the platform on which a video will be displayed greatly impacts how a video will be edited. TikTok and some other video sharing platforms also have their built-in editing capabilities. YouTube and Instagram have such features to lesser degrees. For this list, only apps that are for editing videos and not sharing them will be considered. Some apps are target both video and photo editing. These are usually those that allow the addition of GIFs, stickers, and text.

The above table contains the top 10 apps are the most downloaded apps that can be categorized under video editing apps (excluding social media apps with an editing feature). We compile the list from both stores worldwide in December. We then compare the apps against last month to see if they have risen or fallen in rank.

There is little overlap between the two stores in terms of the top video editing apps. There may be many reasons for this, but one of them could be the way that they are categorized.

The categories under which these applications are kept in each store are quite different. Though at first glance, the label of “photo and video”(App Store) versus “video player” (Play Store) may seem somewhat similar, this tends to make a huge difference in the way the applications may be sorted. The first difference is that the “photo and video” title is the presence of the keyword “photo”. Therefore competition within this category is for applications that edit photos and videos, normally for social media. Additionally, this means that some video editing apps that also have a photo editing feature end up in the group “Photography” in the Play Store. This groups these apps in with Snapchat, Instagram, Google Photos, YouTube, and the likes.

PicsArt is the highest-ranking of these apps and it has some interesting marketing strategies. One advantage for these photo and video editing apps is that they get to use high ranking keywords of social media platforms for their ASO and still have them be relevant to their app. This is because people use photo and video editing apps to enhance their social media presence. PicsArt is using Apple Search Ads and is bidding on many big names, for example, Instagram, Snapchat, Tiktok, Disney, and Pinterest.

Even though these bids are accounting for a low percentage of the results, they may still be effective. Why is this? People who are searching for TikTok for example may want to download TikTok, or they may be interested in enhancing their content on the app. This demographic is more interested in apps that can add stickers and edit their videos.

This may be due to the similarity in names and icons of the Pictionary game Pictoword: Fun Word Quiz Games. This strategy seems to be altogether misleading. Perhaps it is counting on people mistaking the two, downloading the app, and then liking it.

CapCut also did well in both stores this month. This video editing app markets itself as an application to edit videos for TikTok. There are some notable differences between the app in the Apple App Store and the Play Store.

The application is mostly used in Korea and Japan in the app store. It is a Japanese app, so this is not surprising.

This creative, for example, was shown in Japan. It displays a video montage, showing off the capabilities of the application. The title of the creative includes the word TikTok, as TikTok users are the target demographic for this app.

Their creatives are currently in Japanese, Korean, and English. However, earlier this year, they were solely in Japanese. This indicates that the application is expanding geographically and localizing its creatives along with it.

However, in the Play store, the application markets itself in Japanese and Korean.

This is not the only data that differs from the two app stores. CapCut ranks higher as an advertiser in the Play store and has the majority of their creatives on AdMob over 12 Ad Networks. Most of their creatives are images and videos.

The creatives in the Play store are more tutorial-esque rather than showing the final product. There is also not as big of an emphasis on TikTok.

Some of the applications in the Top 10 are also for editing YouTube videos. Though this distinction may have seemed redundant in the past, the staggeringly different styles and vertical versus horizontal nature of the videos on social media and YouTube make it so that the two platforms have different markets for editing apps.

Video.Guru is one such application. This application is remarkable in the aspect that it has no creatives besides the screenshots from the play store. It instead relies on its ASO. It has a description crammed full of key-terms and a very long title describing its function.

The application has relatively high ratings and users seem to be happy with the product.

Apps in the Play store often use this strategy. This may because it allows for longer descriptions and titles. There is a notable absence of these apps in the Apple App Store. This may be because iPhones already come equipped with iMovie and most users do not need an additional video editing app for this style of video.

The Application has great visibility globally. The title, subtitle, and description are localized in most countries and it has an audience around the world.

This is only the beginning! There is so much you can learn and apply to your own app based on the creative strategies of the Top 10 Video Apps of December 2020. Sign up for a demo and dive even deeper into the world of app creatives.

« What’s up with WhatsApp
Roblox: Taking the Adventure to the Real World »