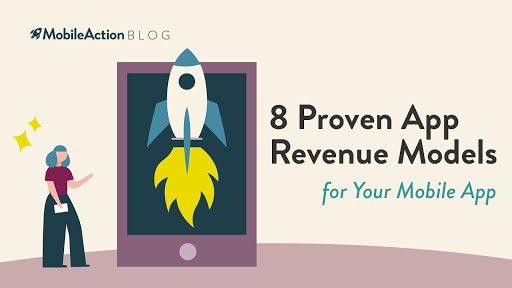 It is very unlikely that developers create apps just because they have free time or they are nice people.

When starting business entrepreneurs think about the revenues they can make and what they should do to reach their financial targets.

The mobile market is undoubtedly attractive in terms of possible income. According to Statista, global mobile app revenues amounted to over 365 billion US dollars in 2018.

While the industry revenues are soaring, some developers are struggling to find the right approach to monetize their mobile apps.

In this blog post, we will look closer into the app revenue models and describe how to make money with apps.

What is App Revenue Model?

A revenue model is a framework for generating revenues. A revenue model defines the sources that generate income. It also identifies what value will be offered by the product, how much it will be worth, and who will pay for this value.

In simple words, when we talk about app revenue models we implicate the ways and the sources through which the mobile app will make money.

The app revenue model is an integral part of a business concept (or business plan) – the document that should be created before going into the development stage.

The app revenue model will also be of top interest to investors if you decide to raise additional funding for your product or sell it.

There are different types of app revenue models, and developers can utilize several of them within one app to maximize their income.

Out of 3.9 billion users of mobile devices globally, 51% access the internet through their smartphones only. 89% of the total time spent on their smartphones, people play games and use messaging and shopping apps.

Integrating in-app advertising into the app revenue model means that the developer will get paid for serving ads within the app. To do that, a developer has to partner with an ad monetization platform and integrate their SDK (Software Development Kit) which is a piece of code that should be properly added to your app code.

Usually, this is not a complicated process as ad monetization companies provide detailed documentation and support in case of questions.

To gain substantial revenues from in-app advertising, the app needs to have a significant number of active users who engage with an app regularly. So, before cooperating with any ad network it would be good to work towards increasing the user base.

There are several ad formats that can be served to users.

A good thing about in-app advertising as a revenue source is that the app remains free for users. On the other hand, it is important to keep the balance and not to annoy the users too much.

In-app purchases allow users to buy some features, content or services within an app. They are quite a wide notion and include several types of revenue sources that can be utilized by developers.

Non-consumables are premium features that don’t expire and can be used multiple times. An example can be an additional filter in a photo app.

Some apps are based on non-renewing subscriptions and provide access to content or services for a limited period. This model is often used by seasonal sports apps that provide a season pass to streaming content.

If an app developer offers in-app purchases, users should be informed about it. This information is displayed within the app listing in the app stores.

Selling users’ data might not sound very nice and ethical at the very beginning but this is, in fact, a legal way of making money. In the end, you are not sharing any personal information – all the data is impersonated.

If your app collects some information that can be valuable to research institutions, marketers, product owners or other third parties, you can consider data monetization as a revenue source.

Typically, this can be information about users’ devices, network type, location, IP address, etc. Of course, users need to be aware that their data can be passed to third parties, so it is important to openly provide this information in documentation such as Privacy Policy and Terms of Services.

In one of our previous blog posts, we talked about “crowdfunding platforms if you have an idea for an app“as a way to get initial funding for your app. You will not be able to generate revenues from Kickstarter or similar platforms but it can become an option to get some extra income.

If you came to a point when you have a substantial base of engaged users, you may consider using affiliate marketing and lead generation models.

Affiliate marketing is about having ads of another product in your app and earning a commission each time your users tap on an ad and convert to a sale or lead. To make it work, you’ll need to have the same target audience with an app that you are advertising.

Lead generation is about capturing the contact information of people who will tap on an ad and agree to provide their contact details.

There are lots of affiliate marketing networks and you are free to join as many of them as you wish to maximize your revenues. But like with ads, it is not very easy to forecast your income as users’ behavior is often unpredictable.

If you want to promote your app’s seasonal sale or explain your B2B product in more detail, SMS and Email marketing can help you with that.

These tools will not become your main sources of revenue but they can help you boost your app and generate more sales. While emails allow being very descriptive, use lots of images and text, SMS are short and straight to the point.

Having a sponsor is not a common way to monetize your app but it is not that new.

Back in 2012, a sandwich chain Subway sponsored PrePlay, a predictive gaming app, during the Super Bowl XLVI, trying to engage with the football fans and grow its brand awareness. Marriot sponsored the launch of Gayot.com mobile app that showed restaurant reviews written by professionals. In such a way, Marriott was promoting its Rewards Chase Card to business travelers.

The way you integrate a sponsor into your app depends on the product and the goals of the partner. Some simple options include placing the sponsor’s logo in different parts of the screen, provide special offers from the sponsor, showing sponsors’ ads, etc.

The majority of the apps in application stores are free to download.

However, there is an option to offer paid apps that require paying money to download an app. After the payment, a user gets an app with all the features available that can be used from multiple devices.

With the paid app model, the revenue is strictly connected to new users downloading an app. To have stable revenues over time, developers need to spend much effort to grow a new user base.

To ensure good reviews, an app needs to be of high-quality, have outstanding features that are different and more advanced than competitors have and overall deliver an impressive user experience.

With so many free apps available, it is not easy to make users pay for an app. Often, paid apps are offered by very well known brands or respected institutions that are famous as a non-app business. A new startup app that has not proven value to the users previously has big chances to fail their monetization efforts when replying on the paid app revenue models.

Even with free apps, it is possible to generate revenues. It might take some time to find out which revenue source works best for your app. Most developers mix several approaches and try to create a balanced model that would work well for both users and app creators.

Schedule a demo with us for more insights and to boost your app growth.

« An Inside Look At the Call of Duty: Mobile’s Ad Strategy
How Grafikwerket Increased Downloads by 1800% with MobileAction »